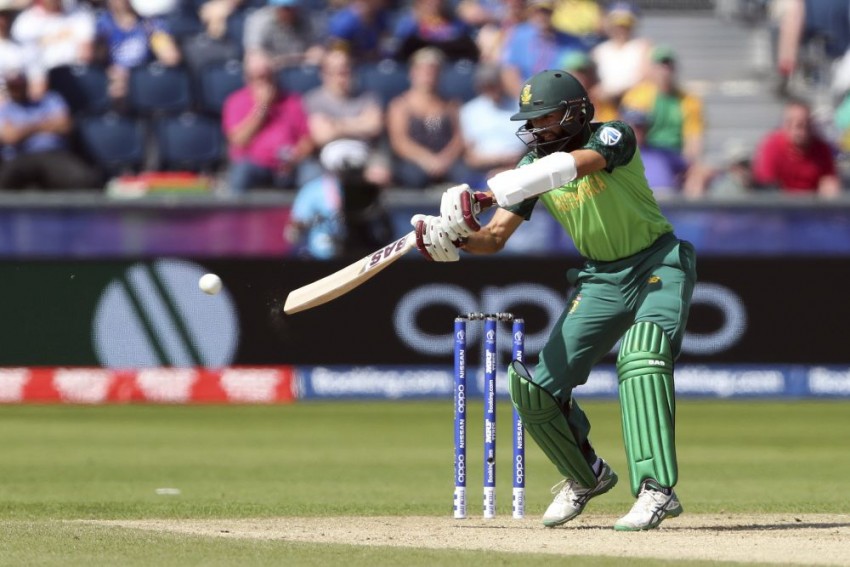 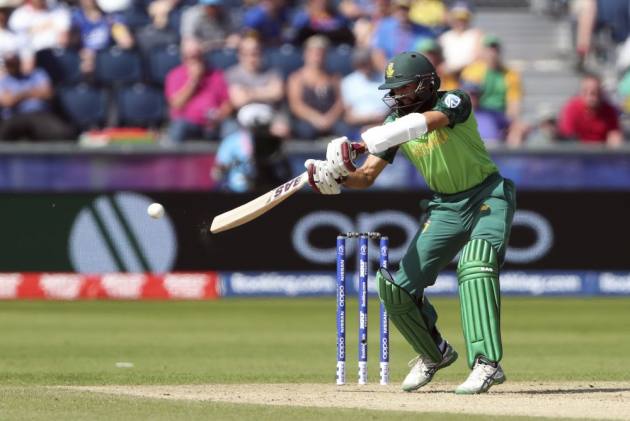 South Africa dealt a big blow to Sri Lanka's Cricket World Cup semifinal hopes with a dominant nine-wicket win in Chester-le-Street on Friday (June 28). After being asked to bat first, Sri Lanka lost wickets at regular intervals and were bowled out for 203 in 49.3 overs. Dwaine Pretorius and Chris Morris took three wickets each, while Kagiso Rabada took two. In reply, the Proteas rode on Faf du Plessis and Hashim Amla’s unbroken 175-run stand to seal the deal with 76 balls remaining. With just six points from seven games, Sri Lanka still have a mathematical chance to qualify for the semis. They need to win their last two games against West Indies (on July 1) and India (July 6), and then depend on favourable results from other remaining league stage games. Get highlights of Sri Lanka vs South Africa here (SCORECARD | POINTS TABLE | FULL SCHEDULE)

Dwaine Pretorius, Player of the Match: "I'm just happy we got over the line today and I'm glad I could play a part in that. I try and work as hard as possible, and most guys give me a bit of flak for that, but at the end of the day I'm glad I was ready to take the opportunity that came to me," he says with a laugh. "Me and Faf spoke after my third over, and we realized hitting the top of off was the best option on this wicket, and I'm glad I could execute today. The guys are stoked, we showed what we are capable of, I'm just sad that it's too late."

22:04 hrs IST: FOUR! That's it. South Africa win by nine wickets. Faf misses out on his century but what a day it has been for the Proteas! Clinical bowling performance and then "HashFaf" show. Two matches left for Sri Lanka and they need to win both to keep their semis hopes alive.

21:17 hrs IST: SIX! Fuller delivery from Lakmal, Du Plessis steps out and smashes it straight over the bowler's head for a maximum. A half-century for the South Africa skipper. Third in the tournament. Has played nicely.

20:45 hrs IST: Single and that's a half-century for Amla. Second in the tournament. Needs to keep going on and help his side cross the finishing line. South Africa are 111/1 after 20 overs, need 93 to win.

20:35 hrs IST: Lakmal on with his fifth over. Five wides to start with, then a boundary off the fifth ball as Du Plessis plays past the fielder at square. South Africa are 94/1 after 17 overs.

20:23 hrs IST: Lakmal continues. Amla hits a four, behind point. Typical Amla! Seven runs from the over. South Africa are 79/1 after 15 overs.

Meanwhile, Afghanistan have sent Aftab Alam home from the World Cup for a disciplinary breach and replaced him with Sayed Shirzad.

It was confirmed on Thursday that Afghanistan had been granted permission to make the change, with the ICC stating they had done so "under exceptional circumstances". Read full story here

19:46 hrs IST: Splendid over from Malinga, only two runs off it. South Africa are 36/1 after 7 overs. Amla 16*, Du Plessis 3*. Another change in bowling. Thisara Perera comes into the attack.

19:41 hrs IST: Du Plessis opens his account with a double towards deep square leg. South Africa are 34/1 after 6 overs.

19:36 hrs IST: OUT! Toe-crusher! Malinga at his very best. Big wicket - De Kock departs for 15(16). Faf du Plessis comes to the crease. South Africa are 31/1 after 5 overs. Suranga Lakmal comes into the attack.

19:31 hrs IST: Another costly over, this time from De Silva. Two boundaries off it. South Africa are 28/0 after 4 overs. De Kock 15*, Amla 12*. Sri Lanka should have looked to attack in these overs, but that hasn't been the case. Seems all too easy for the Proteas.

19:27 hrs IST: FOUR! Too full from Malinga and De Kock punches it straight down the ground. Expensive over from Malinga, 10 off it. South Africa are 20/0 after 3 overs. Amla 12*, De Kock 7*. Dhananjaya again

19:19 hrs IST: Consecutive boundaries from Amla. Just the kind of start South Africa would have been looking for. Malinga needs to find the correct length soon. South Africa are 9/0 after the first over. Spin from other end. Dhananjaya de Silva comes into the attack.

A swarm of bees that have come across the ground. Everyone is lying down.

18:24 hrs IST: OUT! Short delivery from Phehlukwayo, Perera miscues a pull to deep square leg and Rabada takes a fine diving catch. Suranga Lakmal comes to the crease. Sri Lanka are 188/8 after 46 overs.

17:59 hrs IST: OUT! Short from Morris, J Mendis looks to pull but gets a top edge and the fielder at fine leg - Pretorius - runs in and completes a nice catch. Isuru Udana comes to the crease. Sri Lanka are 163/7 after 40 overs. Imran Tahir comes back into the attack.

17:49 hrs IST: SIX! Short delivery from Morris and J Mendis smashes it over wide fine leg for a maximum. Sri Lanka are 145/6 after 38 overs. Duminy to continue.

17:43 hrs IST: OUT! Tossed up from JP Duminy, De Silva looks to reverse sweep towards backward point but misses it completely and the ball crashes onto the stumps. First wicket for the South Africa spinner. Thisara Perera comes to the crease. Sri Lanka are 136/6 after 37 overs.

17:30 hrs IST: Maiden over from Rabada. Get a feeling something is going to happen here. Sri Lanka are 128/5 after 34 overs. De Silva 19*, Mendis 2*. Andile Phehlukwayo comes back into the attack.

WAQAR YOUNIS: "Pakistan knew that if they beat New Zealand they could increase the pressure on England and give themselves a real chance of making the semifinals.

"The danger is now that complacency starts to creep in. After beating South Africa and then unbeaten New Zealand, it would be easy to get carried away. They cannot allow that to happen, they need to focus on the next game against Afghanistan and make sure they win." Read full story here

17:17 hrs IST: FOUR! Flighted delivery from Tahir, De Silva comes forward and drives it through cover for his first boundary. Sri Lanka are 123/5 after 31 overs. De Silva 15*, Mendis 2*. Pretorius to bowl his final over.

17:08 hrs IST: OUT! Width on offer from Pretorius, outside off, Mendis is early into shot and Morris takes a neat diving catch at cover point. Mendis' struggle comes to an end. Used up 51 deliveries for his 23. Third scalp for Pretorius. Jeevan Mendis comes to the crease. Sri Lanka are 111/5 after 28 overs.

16:47 hrs IST: OUT! Short of a length from Morris, Mathews charges down the track, looks to pull but gets a bottom edge straight into the stumps. The former Sri Lanka skipper looked patchy during his 29-ball (11) stay at the crease. Dhananjaya de Silva is the new man in. Sri Lanka are 100/4 after 22 overs. Tahir to continue.

16:21 hrs IST: Another magnificent over from Pretorius, just one off it. Sri Lanka are 83/3 after 16 overs. Mendis 8*, Mathews 4*. Kagiso Rabada comes back into the attack.

16:01 hrs IST: OUT! Scrambled seam from Pretorius, back of a length, Perera looks to work it towards third man but gets an inside edge onto the stumps. Second wicket for the South African. Angelo Mathews, who scored a match-winning half-century against England at Leeds, comes to the crease. Sri Lanka are 72/3 after 12 overs.

15:51 hrs IST: OUT! Length delivery from Pretorius, Fernando looks to hit it over mid-on but miscues and Du Plessis, running back from mid-off, takes a good catch. A wicket and 10 off the over. Kusal Mendis comes to the crease. Sri Lanka are 67/2 after the end of first Powerplay.

15:41 hrs IST: FOUR! Fraction short from Pretorius and it's enough for Fernando to flick it to the fine leg boundary. Sri Lanka are 52/1 after 8 overs. Fernando 24*, Perera 20*. Another change in bowling. Andile Phehlukwayo comes into the attack.

15:28 hrs IST: FOUR! Overpitched from Rabada and Fernando drives it straight past the bowler. Top-class! Also, there were four byes. Sri Lanka are 36/1 after 5 overs. Fernando 18*, Perera 12*. First change in bowling. Dwaine Pretorius comes into the attack.

15:14 hrs IST: FOUR! Short ball from Morris, wide outside off, Perera slaps it through point for his first boundary. Costly start from Morris, eight off the over. Sri Lanka are 14/1 after 2 overs.

15:08 hrs IST: Fernando off the mark. Short and wide from Rabada and the Sri Lanka No. 3 punches through the gap at point for three runs. Sri Lanka are 6/1 after the first over. Chris Morris comes into the attack.

15:04 hrs IST: OUT! Rabada strikes on the very first delivery. What a start for South Africa! Back of a length, it looked like Karunaratne didn't see it. Bounces off the bat and Du Plessis does the rest at second slip. Avishka Fernando comes to the crease.

15:01 hrs IST: Time for live action. Dimuth Karunaratne and Kusal Perera are at the crease. Kagiso Rabada to begin the proceedings.

14:33 hrs IST: South Africa have won the toss and have opted to field

14:05 hrs IST: STAT ATTACK - Lungi Ngidi has taken 18 wickets in nine innings against Sri Lanka at an average of 18.8, his best against any top-10 ranked opponent in ODIs.

13:49 hrs IST: South Africa's sole victory came against Afghanistan – the only team yet to register a point in the competition – and the Proteas' campaign has been undermined by injuries and loss of form to key players, as well as the selection furore surrounding AB de Villiers on the eve of the squad being announced.

All is certainly not well within the camp, but the 2015 semi-finalists will be desperate to salvage a measure of pride at The Riverside.

13:33 hrs IST: BIG NUMBER - Lasith Malinga's next maiden over will be his 100th in this format; he would become just the fourth player to reach a century of maidens for Sri Lanka in ODIs (Chaminda Vaas – 278, Muttiah Muralitharan – 195, Nuwan Kulasekara – 106).

Sri Lanka coach Chandika Hathurusingha: "You can take it either way. When you have no pressure of qualifying, they [South Africa] can come and play without any pressure, fearless cricket and that can get them going, so at the same time they can turn up and just want to go home, so you never know."

South Africa all-rounder JP Duminy: "Ultimately you need to make that decision for yourself. Is your foot on the plane or does that give you a sense of freedom? I 100 per cent agree with the freedom. Just go out and play your natural game, your naturally-gifted game."

13:19 hrs IST: Sri Lanka have won both of their two previous ODIs at The Riverside, both times against England by margins of eight wickets in 2006 and 157 runs in 2014.

13:15 hrs IST: STAT ATTACK - South Africa have won 16 of their last 18 ODIs against Sri Lanka, including the last five meetings. The two losses in that run came in successive games in August 2018.

Losses to England, Bangladesh and India before a no-result with West Indies have left South Africa with a mountain to climb. Victory over Afghanistan provided a glimmer of hope but defeats against New Zealand and Pakistan saw the Proteas eliminated from the ICC World Cup 2019.

"The way we played is borderline embarrassing,” South Africa captain Faf du Plessis had said after the defeat to Pakistan.

“We are a mediocre team at the moment because we are making the same mistakes. One step forward and two steps back is not a good team.

"The guys are playing with low confidence and making the same mistakes. It just rolls on; it's such a snowball effect.”

Sri Lanka are currently seventh, but two points today would take them straight up to fifth, just below England. (SCENARIOS)

With Pakistan and Bangladesh also in contention to make the semifinals, Sri Lanka may need to win all three remaining games to progress - with West Indies and India still to come.

Both Sri Lanka and South Africa have struggled with the bat. But Sri Lanka have an experienced bowling attack led by the experienced Lasith Malinga, who is playing his fourth World Cup.

Along with Dhananjaya de Silva, Malinga defended a relatively modest target of 233 against England, bowling out Eoin Morgan’s side for 212.