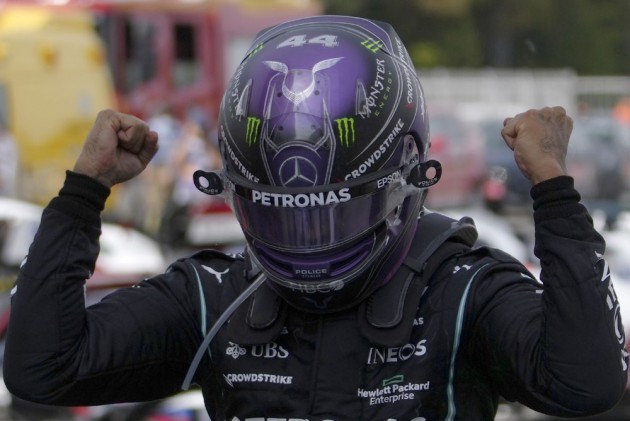 Max Verstappen passed Hamilton on Turn One in a dream start for Red Bull after the seven-time Formula One champion had been on pole for the 100th time.

Championship leader Hamilton was not to be denied a fifth consecutive win in the race at the Circuit de Barcelona-Catalunya, though, passing Verstappen on lap 60 of 66 in another masterclass from the Briton.

Mercedes' decision to pit Hamilton for a second set of medium tyres on lap 43 paid off, with Verstappen having been kept out at the front and having to settle for second place ahead of Valtteri Bottas.

Hamilton managed his tyres to perfection to extend his championship lead, as well as matching Michael Schumacher's record of six Spanish Grand Prix triumphs to make it three wins out of four this season.

A late fastest lap for Verstappen provided a small consolation but he now trails in the standings by 14 points.

Verstappen had made a brilliantly bold move to pass Hamilton on the inside, the pair coming within a whisker of making contact. Red Bull's start then got even better when Ferrari's Charles Leclerc nipped ahead of Bottas on the outside at Turn Three on the opening lap.

Verstappen retained his advantage after the safety car was deployed following Yuki Tsunoda's retirement due to a fuel pressure issue on lap eight, but a poor pit stop was a setback for the Dutchman on lap 24.

Hamilton stayed out four laps longer than his rival on the soft compounds and the Brit returned with a gap of around six seconds to make up.

The reigning champion was right on the back of Verstappen when he was called in for a second time, returning in third place behind also Bottas - who had passed Leclerc - and 23 seconds behind the leader.

Bottas allowed Hamilton to go by him on lap 52, but not before the Finn showed a reluctance to follow team orders.

Hamilton moved back in front six laps from the end, Verstappen unable to prevent him from going around the outside as the Mercedes eased away.

Hamilton reached a staggering century of poles on Saturday and he is now only two away from reaching the same number of race victories after this brilliant exhibition of driving.

He took an early setback on the chin and responded like the champion he is, with Mercedes setting him up perfectly to hunt down Verstappen and inevitably regain a lead he was then never likely to relinquish.

Hamilton used his huge experience and skill to manage his tyres expertly, with Verstappen knowing it was only a matter of time before he was overtaken so late in proceedings.

FRUSTRATION FOR MAX ON TRACK WITH FOND MEMORIES

Verstappen won his first race at this circuit as an 18-year-old in 2016, but said he was a "sitting duck" as Hamilton hunted him down.

He made a great move to hit the front in the opening stages, but endured frustration when Red Bull made a mess of a stop and once again had to settle for the second step on the podium.

Verstappen warned, "I don't see how we can make it until the end on these tyres" on his radio on lap 48. Although he finally came in for a second stop, it was from second place and with the aim of returning to the track to clock the fastest lap.