La Liga champions Barcelona eased to a 5-2 win over Real Mallorca at Camp Nou on Saturday, with Lionel Messi scoring another hat-trick 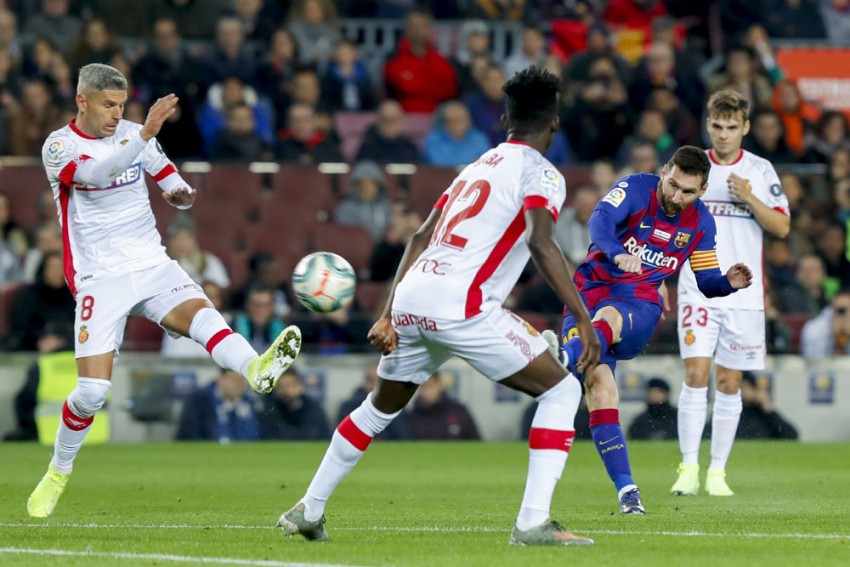 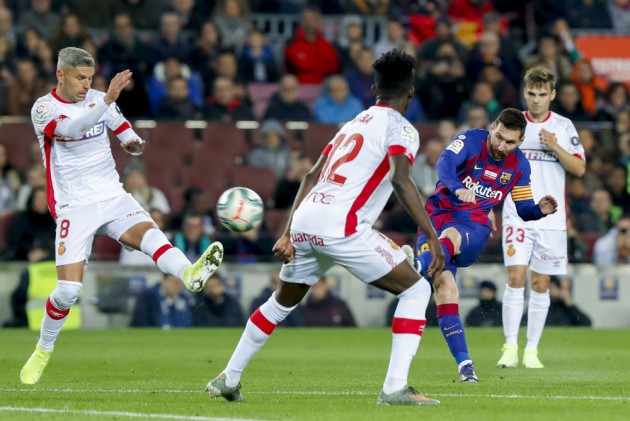 Lionel Messi scored a hat-trick in the week he was crowned the world's best player as Barcelona eased to a 5-2 home win over Real Mallorca and reclaimed top spot in La Liga. (More Football News)

Antoine Griezmann gave Barca a seventh-minute lead and Messi then took over with a couple of goals, either side of Ante Budimir's strike against the run of play.

On a day when the home side's front three clicked into gear, Luis Suarez added a fourth before the end of the first half with a sublime back-heel to round off a fluid passing move.

Budimir pulled another back for Mallorca 26 minutes from time, but Messi rounded off his hat-trick late on as Barca maintained their good form and overtook Real Madrid at the summit.

Two goals in the Camp Nou for Ante Budimir...#BarçaRCDMallorca pic.twitter.com/3tQbBUG7uB

Marc-Andre ter Stegen claimed a second assist of the season with a quick goal-kick that Griezmann collected and lifted over Manolo Reina after racing through on goal.

Reina produced an impressive save to keep out the returning Sergio Busquets' header, but Messi found a way past the visiting keeper 95 seconds later with a 25-yard curler.

Mallorca, now winless in seven away league outings this season, gave themselves hope when Budimir's shot deflected off Clement Lenglet and looped over Ter Stegen.

But Messi took matters into his own hands with another trademark goal from range, before Suarez capped a fine piece of team play by back-heeling in from eight yards.

Reina frustrated Ernesto Valverde's men with a string of saves and Budimir then headed in from close range to once again give Mallorca a foothold on the game.

Barca made certain of a sixth win in a row in all competitions thanks to Messi's third of the match late on, the forward picking out the roof of the net after being teed up by Suarez to move onto 35 LaLiga hat-tricks in his career – one more than Cristiano Ronaldo.

35 - @FCBarcelona's Lionel Messi has become the player with the most hat-tricks in @LaLigaEN history (35), surpassing Cristiano Ronaldo (34). Excellence. pic.twitter.com/WUFU9Ck241

What does it mean? Barcelona hit top gear to overtake Real Madrid

Madrid's straightforward 2-0 win over Espanyol earlier on Saturday saw them leapfrog Barcelona at the La Liga summit, but the champions responded in style to move level on 34 points.

Valverde's men played some sublime football against Mallorca and have now collected 27 of the last 30 points on offer, compared to 14 from the previous 27.

Barcelona superstar Messi saw off competition from Virgil van Dijk to win a record sixth Ballon d'Or on Monday and he once again proved his worth with his treble.

He has been involved in at least one goal in his past nine La Liga games for Barca and has now reached doubled figures for goals in 14 successive league campaigns.

Mallorca make a mockery of marking

Suarez's goal was undoubtedly the best of the contest, but could Mallorca have done more to prevent it?

Frenkie de Jong was allowed to play a couple of one-twos on the edge of the box and slip the ball in behind for Suarez to do the rest, with the likes of Martin Valjent and Antonio Raillo simply watching on.

28 - @FCBarcelona's Luis Suárez has scored against every team he has faced in @LaLigaEN (139 goals). Spectacular. pic.twitter.com/qpxLvCEmDF

- Barcelona's Lionel Messi has become the player with the most hat-tricks in La Liga history (35), surpassing Cristiano Ronaldo (34).
- Luis Suarez has scored against every team he has faced in La Liga (139 goals against 28 teams).
- This is the third game in which Messi, Suarez and Antoine Griezmann have scored together for Barca in all competitions and the second in La Liga (Eibar and Borussia Dortmund were the others).
- Marc-Andre ter Stegen is the only goalkeeper to assist two goals in the top five European leagues this season.
- Mallorca's Manolo Reina made 14 saves against Barcelona, the most by a goalkeeper in a game in the top five European leagues this season.

Barca travel to Inter in the Champions League on Tuesday, with their place in the last 16 already assured. Mallorca have an eight-day gap before heading to Celta Vigo.