The clinical Kylian Mbappe struck in each half to give Paris Saint-Germain the advantage in their last-eight tie against Bayern Munich. 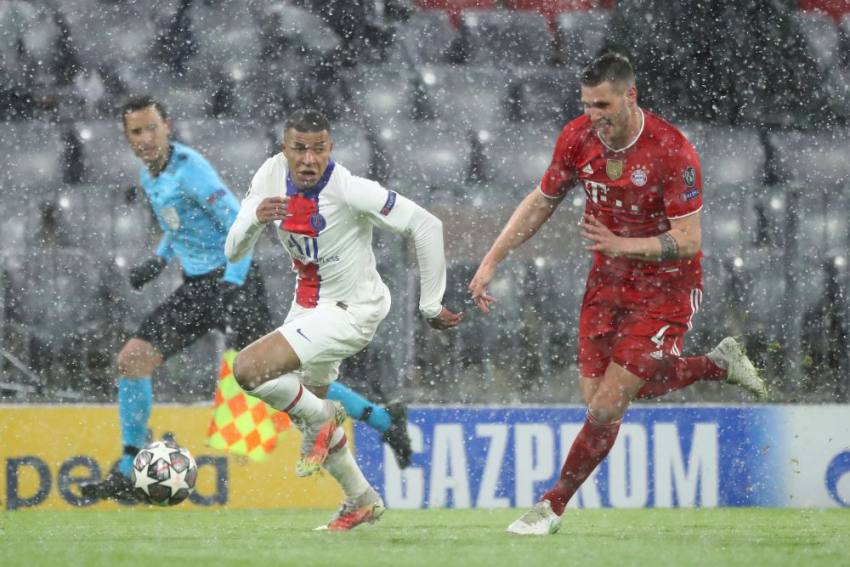 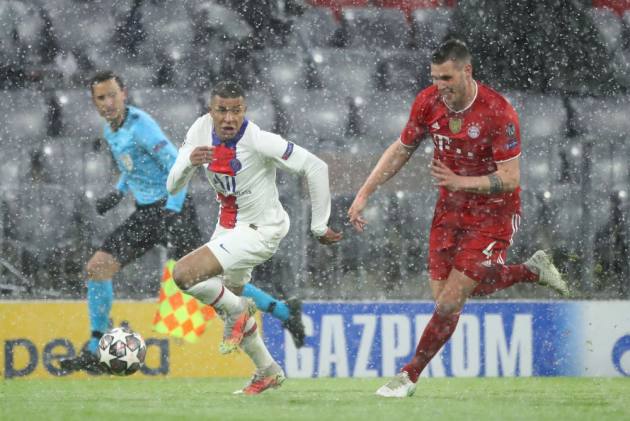 The lethal Mbappe's 31st goal of the season early on in the snow at Allianz Arena on Wednesday and a header from captain Marquinhos put PSG two goals up in a repeat of last year's final.

Eric Choupo-Moting pulled one back against his former club in the first half and Thomas Muller levelled after the break, but Mbappe had the final say with a third away goal for PSG.

Mbappe's double, which took his tally to eight goals in as many Champions League games this season, gave Mauricio Pochettino's side the upper hand heading into the second leg at the Parc des Princes next Tuesday.

Choupo-Moting headed against the crossbar early on, but it was PSG who took the lead with an Mbappe strike in the third minute.

The France striker controlled a pass from Neymar, sent off in the defeat to Lille on Saturday, before unleashing a right-footed shot that squirmed under Manuel Neuer.

Julian Draxler had a goal ruled out as Mbappe was marginally offside before PSG goalkeeper Keylor Navas superbly kept out Leon Goretzka's close-range header and a Benjamin Pavard drive.

Marquinhos was replaced by Ander Herrera with a groin injury soon after, and his presence was missed at the heart of the PSG defence when Choupo-Moting headed home Pavard's cross eight minutes before the end of a pulsating first half in which Bayern lost injured duo Niklas Sule and Goretzka.

Neuer denied Neymar from close range and Alphonso Davies was on hand to clear Angel Di Maria's goal-bound shot off the line early in the second half.

The holders were level on the hour-mark, with an unmarked Muller rising to nod Joshua Kimmich's whipped free-kick beyond a helpless Navas.

Muller went off for treatment with blood pouring from his head moments later and Mbappe inflicted more pain on Bayern midway through the second half, driving into the area before firing inside the near post through Jerome Boateng's legs.

David Alaba came close to an equaliser when his measured shot clipped the outside of the post as PSG clung on for a precious advantage.

What does it mean? PSG on course for revenge as Flick suffers first defeat

PSG will not be celebrating just yet, but this was a huge victory in their quest to win the Champions League for the first time and they will not have to face Robert Lewandowski once again in the second leg.

Bayern were fragile at the back and the Ligue 1 champions capitalised, Mbappe taking centre stage in a pulsating contest.

Hansi Flick will be concerned about how vulnerable his side appeared in defence in his first Champions League defeat as head coach, with PSG the first team to beat them in the competition since Liverpool in March 2019.

Sum up this game in one word!

Bayern looked wary of the pace of Mbappe from the start and the clinical France striker punished them.

His eight Champions League goals for the season is the joint most for a Frenchman in a single season, along with Wissam Ben Yedder in 2017-18 and David Trezeguet in 2001-02 and he scored with his only two attempts.

Neymar also stepped up when PSG needed him, and now has 26 assists – more than any other player in the Champions League since making his debut in the 2013-14 season – to go with 41 goals in 66 appearances in the competition.

Boateng all at sea

Bayern defender Boateng was introduced late in the first half after Sule sustained an injury and it was certainly not one of his better nights.

The centre-back looked off the pace as he struggled to contain Mbappe and was also booked.

- Paris Saint-Germain have beaten Bayern Munich away from home in the Champions League for the first time since November 1994, having lost on three straight such visits since.

- Before this game PSG had lost each of last four Champions League knockout matches against the holders (two versus Milan and two versus Real Madrid).

- Bayern's Joshua Kimmich created 10 chances against PSG, the most by a player in a single Champions League match at the quarter-final stage or later since Mesut Ozil (12) for Real Madrid against Tottenham in April 2011.

- Bayern's Thomas Muller has scored 24 goals in the knockout stages of the Champions League, the fourth most of any player, behind Cristiano Ronaldo (67), Lionel Messi (49) and Robert Lewandowski (26).

PSG travel to Strasbourg in Ligue 1 on Saturday prior to the second leg, while Bundesliga leaders Bayern entertain Union Berlin on the same day.