James Rodriguez has signed for Everton. We take a look at how Colombia's golden boy fared for Real Madrid and FC Bayern since 2014 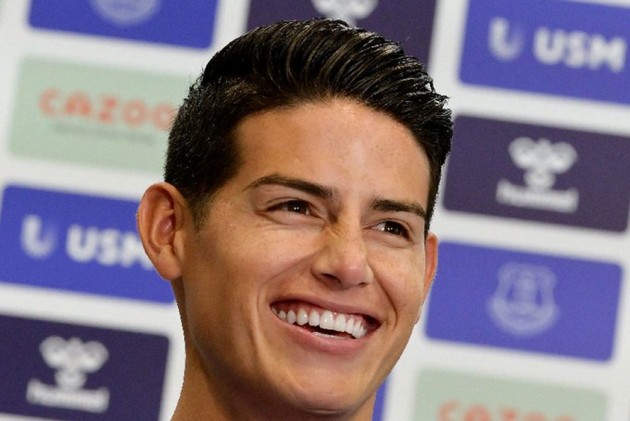 On June 28, 2014, James Rodriguez produced a moment of brilliance to score one of the most iconic goals in World Cup history. (More Football News)

Having taken control of Abel Aguilar's header with his chest, James struck a magnificent left-footed volley on the turn that arrowed beyond the helpless Fernando Muslera to put Colombia 1-0 up against Uruguay.

James helped himself to a second shortly after half-time as Colombia moved into the quarter-finals, only to head out to hosts Brazil in the last eight – the then-Monaco man scoring in that 2-1 defeat was enough to win the tournament's Golden Boot with six goals.

His stellar performances for Colombia aged 22 made up the mind of Real Madrid president Florentino Perez, who had seen enough to be convinced James was another Galactico in the making.

Sure enough, Madrid signed James less than a month after the round-of-16 tie with Uruguay at the Maracana, with a 45,000-strong crowd in attendance at Santiago Bernabeu during his presentation.

But despite a promising start, he never truly lived up to the billing and, six years later – with two seasons spent on loan at Bayern Munich – he has left the Spanish capital.

Everton is his destination, with Carlo Ancelotti, who coached James during his first seasons at Madrid and Bayern, eager to be reunited with a player who could provide the magic the Toffees need to push for Europe, and possibly trophies, once more.

Using Opta data for league games, we look at James' path from Galactico to Goodison Park.

From Colombia's poster boy to the Bernabeu bench

James hit the ground running at Madrid under Ancelotti, despite the fact he was rarely utilised in the central role in which he thrived for Colombia. He scored 13 LaLiga goals from 29 appearances – all of them starts – and provided the same number of assists, averaging a goal involvement every 88 minutes.

Following Ancelotti's departure and the appointment of Rafael Benitez ahead of the 2015-16 season, James struggled to make the same impact in his second season, starting just 17 times and making 26 total appearances. He did still score seven times and add eight assists, crafting 61 goalscoring opportunities.

Zinedine Zidane used James sparingly in 2016-17 – his first full season at the helm – with injuries not aiding the Colombian's cause. However, he achieved his best goal-per-game ratio (0.6), scoring eight times and setting up a further six goals.

James finished the season with 11 goals and 12 assists in all competitions.

23 - James Rodríguez has been involved in more goals than any other La Liga midfielder this season (11 goals, 12 assists). Productive. pic.twitter.com/UorvmSz0fv

A stint in the Bundesliga

Ancelotti signed James for a second time in 2017, with the playmaker moving to Bundesliga giants Bayern on a two-year loan deal with a purchase option included.

James swiftly settled into life in Germany's top flight, making 23 Bundesliga appearances, setting up 11 goals and scoring seven himself, creating 64 chances at a league-leading average of 3.5 per 90 minutes.

Having enjoyed his time under Ancelotti and Jupp Heynckes in his first season at Bayern, James fell down the pecking order when Niko Kovac took charge, only starting 13 times in the league. He still managed seven goals and created an average of four chances per 90 minutes, but only three of those ended in assists and at the end of the campaign Bayern did not take up the purchase option.

14 - Only Robert Lewandowski (51) has scored more Bundesliga goals for @FCBayernEN in the previous two seasons than @jamesdrodriguez (14). Farewell. pic.twitter.com/wNhCT0c5uM

Another bite at the apple?

James returned to Madrid, though there was interest from Napoli – then coached by Ancelotti – and Atletico Madrid. A move to either side failed to materialise, however, and he spent much of last season either on the treatment table or the bench, scoring one goal and producing one assist from eight LaLiga appearances.

Ostracised by Zidane, James had one year left on his Madrid contract so the club have cut their losses and agreed a reported £20million (€22.4m) deal with Everton for the 29-year-old.

With a manager he has performed well under in the past in charge at Goodison Park, the Premier League could just be the perfect place for James to rediscover his best form.

Everton, with Richarlison, Dominic Calvert-Lewin and Moise Kean, have a promising strike force, yet creating clear-cut chances has been a major issue for the Toffees over the past few seasons.

In James, they have a player who ranked top in his league for chances created per 90 minutes in every season from 2014 until 2019. If he can stay fit, Colombia's golden boy could well deliver on his 2014 promise.