Chennaiyin FC are yet to win away from home this season and Monday will be the perfect time to get one. For Odisha FC, the sights will be set on a second consecutive win at the Kalinga Stadium 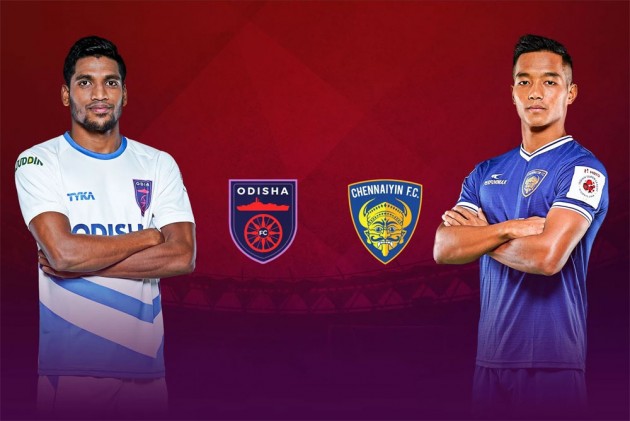 Odisha FC are all set to take on Chennaiyin FC in what is a crucial Hero Indian Super League (ISL) encounter for both sides at the Kalinga Stadium, Bhubaneswar on Monday. (More Football News)

A win against Chennaiyin FC can take Odisha to within a point of fourth-placed Mumbai City FC. And with the league entering a decisive phase, Josep Gombau’s side cannot afford a slip-up.

Chennaiyin FC are also at a stage where anything other than three points could render the gap between them and the top four clubs too much to cut down. They are currently eighth on the table with nine points but a win will see them draw level with Odisha who are sixth.

For all the emphasis on the possession-based philosophy that Gombau advocates, results have been a mixed bag for his team. However, they are coming off a 2-1 win over Jamshedpur and will look to continue their form.

But Gombau must fix his side’s vulnerability on set-pieces. Odisha have scored the joint lowest amount of goals from set-pieces this season so far (2).

A more troublesome stat for the coach is on the defensive. Out of the 15 goals they have conceded, 7 of them have come from set-pieces (most by any team). The likes of Carlos Delgado have to marshall the backline better.

Odisha have also had trouble closing out games. They generally tend to perform better in the first half before running out of steam in the second.

"We have created a lot of chances, creating crosses. Of course, we have to score more goals. Going forward we have to be confident. Defensively we have to improve.

"It is not that we are conceding many goals. Under coach Josep Gombau we are trying to improve on our loopholes. Next match we will go for a win," said Jacobo Varela, Odisha FC’s assistant coach.

The big worry for Chennaiyin FC will be the inability to string a couple of wins together. They have just two wins in nine games and are yet to win consecutive ISL games since the start of last season.

The visitors are yet to keep a clean sheet under Owen Coyle, who has been in charge for three games. The inconsistent displays from the likes of Lucian Goian have not helped. Thankfully, Eli Sabia returns after suspension for Coyle.

"Whether we are playing at home or away, we treat matches in the same manner. If we don't do that it takes away from our strengths. We have great respect for Odisha but if we change our philosophy it will be detrimental. We have some great goal scorers.

"We were the lowest-scoring team initially but when I came in suddenly we scored seven goals in three matches. We have to be positive against Odisha," said Coyle.

Chennaiyin's attack will most definitely revolve around Rafael Crivellaro. The Brazilian playmaker has been exceptional in the last three games under Coyle.

He was involved in four goals in these three games and has created 21 chances in the season so far, second only to FC Goa’s Brandon Fernandes.

Chennaiyin are yet to win away from home this season and Monday will be the perfect time to get one. For Odisha, the sights will be set on a second consecutive win at the Kalinga Stadium.