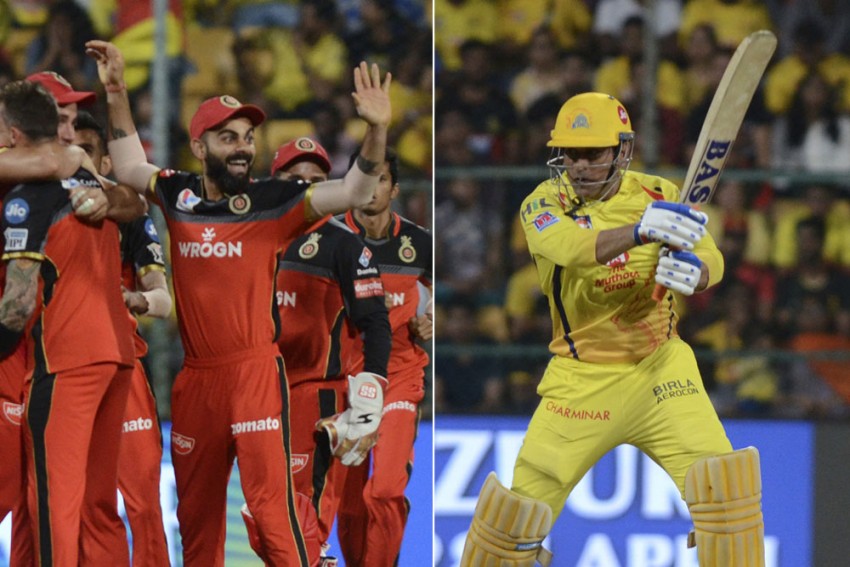 Dhoni for the umpteenth time was in line to pull off another incredible chase but finally ran out of luck at M Chinnaswamy Stadium, Bengaluru, where he played a similar knock last year to guide his team home.

Chasing a target of 162, CSK needed a near-impossible 26 off the last over bowled by Umesh Yadav and Dhoni with 84 off 48 balls that had seven sixes showed that nothing is indeed impossible until the Cricketing Gods intervened.

Only that Dhoni was at the crease and having consumed dot balls off the previous over, he had to go for the jugular and boy he did it with three sixes and a four.

In the end, it was Dhoni who lost to RCB, who eked out their third win of the tournament.

Here are the key takeaways from one of the greatest IPL matches:

- This is the first time CSK have lost two consecutive matches since coming back in IPL 2018;
- It ends a streak of seven successive wins for CSK against RCB;
- Dhoni scores highest score in T20

Man of the match: Parthiv Patel

11:52 PM IST: Needing 26 from the last over, MS Dhoni hits the first ball for a four, then a six off the second over deep mid-wicket. 16 from four. He hits another, over long-off. 10 off three. One-handed hit to deep mid-wicket for a double. Eight off two. Seven to force a super over. Another six, over mid-wicket. Two off one. Dhoni misses and a run out as Parthiv Patel hits the stumps. RCB win by one run. What a match. Umesh Yadav, you escape with your life.

11:45 PM IST: What an eventful over. Navdeep Saini on with his last over. MS Dhoni doesn't take the single. He hits the third ball, a no ball, for a six. Two runs from the free-hit. Then, Parthiv Patel takes a very good jumping catch to dismiss Dwayne Bravo. CSK-136/7. Chennai need 26 runs from in six balls. Shardul Thakur is the new man.

11:05 PM IST: Yuzvendra Chahal on with his second over. He almost had Ambati Rayudu, stumped. Parthiv Patel seemed to have beaten the batsman in the air with the back foot handing. Not out given. Four singles from the over. CSK-70/4 after 12 overs.

10:47 PM IST: Marcus Stoinis gets his first over. Seven runs from it, including a four, off the fifth ball, hit by MS Dhoni behind square. CSK-53/4 after nine overs. They need 109 runs from 66 balls. Time out.

10:42 PM IST: Virat Kohli introduces spin for the first time. Pawan Negi, left-arm spinner, starts his spell with a single to Ambati Rayudu. A dot to MS Dhoni, then the CSK captain hits the next ball for a four, behind the wicket. Seven runs from the over. CSK-46/4 after eight overs.

10:38 PM IST: Navdeep Saini returns for his second over. Two dot balls to Ambati Rayudu, then a four, to third man. A single, then two leg byes. Saini has a good shout for lbw against MS Dhoni though. Seven runs from the over. CSK-39/4 after seven overs. Chennai need 123 runs from 78 balls.

10:26 PM IST: Dale Steyn continues with his third over, on the trot. Very good over. Six runs from it, with a four off the last ball. Inswinger and gets an inside edge to beat the wicketkeeper. Kedar Jadhav very lucky. CSK-23/2 after five overs.

10:19 PM IST: Umesh Yadav unlucky not to get to the wicket of Faf du Plessis. The second ball, a fuller delivery, beats the South African and kisses the off-stump. The spell starts with a side, then a four leg byes, down the leg, off the fifth ball. But he gets his man though. He had Faf caught by AB de Villiers. Almost a collision. CSK-17/3 after four overs. Five runs from the over. Kedar Jadhav is the new man.

10:14 PM IST: Dale Steyn misses out on a hat-trick as Faf du Plessis plays the first ball of the third over past point for a single. Five runs from the over. CSK-12/2 after three overs. Chennai need 150 runs.

10:09 PM IST: Very good first over for Navdeep Saini too. Just a single, off the third ball to Faf du Plessis. CSK-7/2 after two overs.

10:03 PM IST: What a start to the defence. Shane Watson hits the fifth ball for a four to deep square leg, but Dale Steyn hits back. Watson caught at first slip by Marcus Stoinis. FoW-6/1 (0.5 Over). Suresh Raina is the new man. Then the legendary South African cleans up Raina. Middle stump. Oh my goodness. No one will play that. CSK-6/2.

9:43 PM IST: Moeen Ali takes a double, then a four through point. A dot then, another four, to third man. Dwayne Bravo gets his second wicket. He had Ali caught at deep by Shardul Thakur. Ali made 26 from 16 balls. A dot to end the innings. 11 runs from it. RCB 161/7.

9:36 PM IST: Deepak Chahar gets his second wicket, off the last ball of his spell. He had Pawan Negi caught by Ambati Rayudu. Nine runs from the over. His figures:2/25. RCB-150/6 after 19 overs.

9:31 PM IST: Shardul Thakur returns to complete his spell. A single to Pawan Negi. Moeen Ali hits the next ball for a four, through mid-wicket. Two more singles, a wide and a leg bye. Nine runs from the over. RCB-141/5 after 18 overs.

9:10 PM IST: Imran Tahir concedes 10 runs from his third over. A dot ball to Marcus Stoinis, then four singles. Stoinis hits the last ball for a six. RCB-118/3 after 15 overs. Time out.

9:06 PM IST: Dwayne Bravo returns for his second over. Eight runs from it, including a four off the last ball, hit by Parthiv Patel. RCB-108/3 after 14 overs.

8:48 PM IST: Imran Tahir gets his first over. Four singles from it. Parthiv Patel and Akshdeep Nath are in the process of rebuilding the innings. RCB-74/2 after 10 overs.

8:39 PM IST: Another brilliant over from Ravindra Jadeja. Just three singles from his second over. RCB-70/2 after nine overs. Time out.

8:34 PM IST: Dwayne Bravo gets his first over after missing couple of matches due to injury. Five singles and a four, off the fifth ball, hit by Akshdeep Nath, from the over. RCB-67/2 after eight overs.

8:30 PM IST: Ravindra Jadeja strikes in his first over. He had AB de Villiers caught at long-off by Faf du Plessis. FoW-2-58 (6.5 Over). Nine runs from the over, including a six off the second ball, hit by Parthiv Patel. RCB-598/2 after seven overs.

8:25 PM IST: Big over for RCB. Parthiv Patel hits the third ball for a six over backward square crowd, then AB de Villiers finishes off with back-to-back fours. 16 runs from it. Shardul Thakur's figures after three overs:0/32. RCB-49/1 after six overs.

8:20 PM IST: Wicket-taker Deepak Chahar continues with his third over. Eight runs from it. AB de Villiers hits the fourth ball for a six over deep square leg. RCB-33/1 after five overs.

8:15 PM IST: Just the over RCB needed after losing Virat Kohli's wicket. 14 runs from Shardul Thakur's second over. AB de Villiers hits the third ball for a four, then Parthiv Patel finishes off with a six, over square leg. RCB-25/1 after four overs.

8:11 PM IST: Huge wicket. Deepak Chahar gets the prized wicket of Virat Kohli. Caught behind off the third ball. RCB-11/1 after three overs. Four runs from the over. AB de Villiers joins Parthiv Patel in the centre.

8:06 PM IST: Brilliant over from Shardul Thakur. A dot to Parthiv Patel, then a single. Virat Kohli fails to score off the next two balls, then a single off the fifth ball. Just two singles from it. RCB-7/0 after two overs.

8:03 PM IST: Deepak Chahar starts the proceedings in Bengaluru. Five runs from the over with Virat Kohli hitting the last ball for a four, to square leg.

7:33 PM IST: Chennai Super Kings have won the toss and have opted to field.

MS Dhoni calls it right at the toss and elects to bowl first against the @RCBTweets.#RCBvCSK pic.twitter.com/dqfJtpQQSm

Following the tournament opener between CSK and RCB in Chennai, both teams have had contrasting campaigns. While CSK have lived up to their reputation again, RCB continue to under-perform.

No doubt, RCB will be fired up after the win against KKR at Kolkata on Friday night when they finally managed to defend despite a brutal assault from Andre Russell and Nitish Rana. It was only their second win in nine games in the season so far but still kept them mathematically alive in the tournament.

RCB could also take a cue from a similar situation in 2016 when they had lost five of their first seven games, but ended up in the playoffs after winning six of their last seven matches.

IPL 2019, RR Vs DC: Rajasthan Royals To Take On A Rejuvenated Delhi Capitals