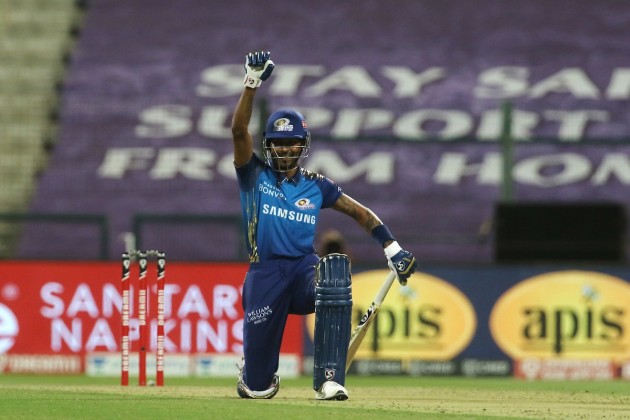 At the height of the Black Lives Matter campaign, former England Test spinner Monty Panesar had said that the Board of Control for Cricket in India, one of the most powerful sporting organisations in the world, should show solidarity to the BLM movement when the IPL happens this season.

But into the tournament's sixth week, the Indian Premier League organisers have done very little to mark the occasion. On Sunday, Hardik Pandya's gesture of "taking a knee" caught a lot of attention. At least, the Mumbai Indians' all-rounder thought about it even he sported a huge grin to mark a solemn occasion.

Hardik Pandya smashed 60 run from just 21 balls. After reaching his half century in the 19th over against Rajasthan Royals, he went down on a knee with his right arm raised to show solidarity with the movement against racism. West Indies all-rounder and Mumbai's stand-in skipper Kieron Pollard responded by raising his right fist.

Panesar, talking to Outlook, had said: "IPL is a global platform. They have a president (Sourav Ganguly) who is an international sporting personality and if the IPL can show its support, there will be a lot of awareness."

Sporting teams have shown support to the Black Lives Matter movement after George Floyd, an African-American, was killed on May 25, 2020 by a White US police officer in Minneapolis  who knelt on Floyd's neck for nearly eight minutes as three other officers looked on. The incident took the world by storm with Jason Holder leading the protest during the West Indies tour of England earlier this year. Holder is a member of IPL team Sunrisers Hyderabad.

Last week, West Indies Test skipper Jason Holder, who plays for the Sunrisers Hyderbad, had expressed his disappointment over none of the IPL teams taking a knee in solidarity with the movement, which, he felt, went unnoticed in the league.

"To be honest, I haven't had one conversation up here around it (BLM). Sometimes it seems it has gone unnoticed, which is a sad thing.

"I guess it's for us to re-highlight the importance of it, for people to understand what is happening in the world," Holder had said.