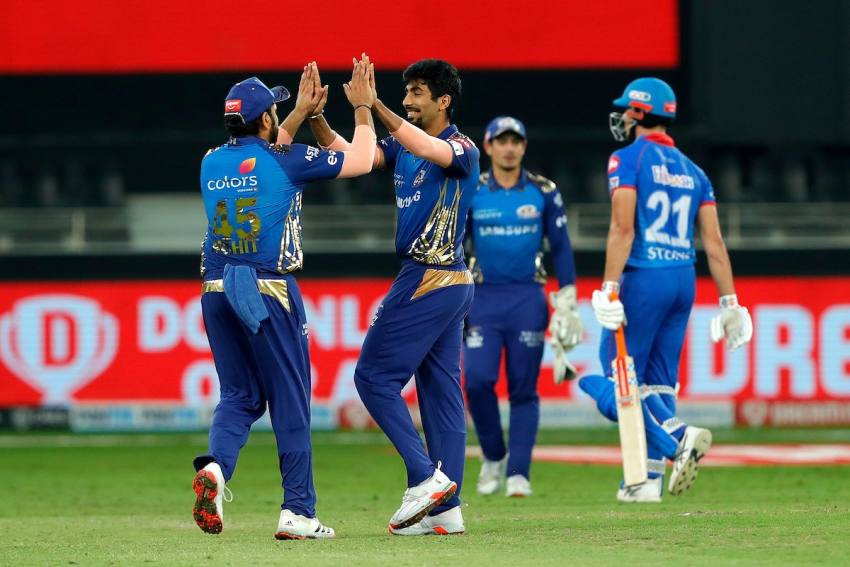 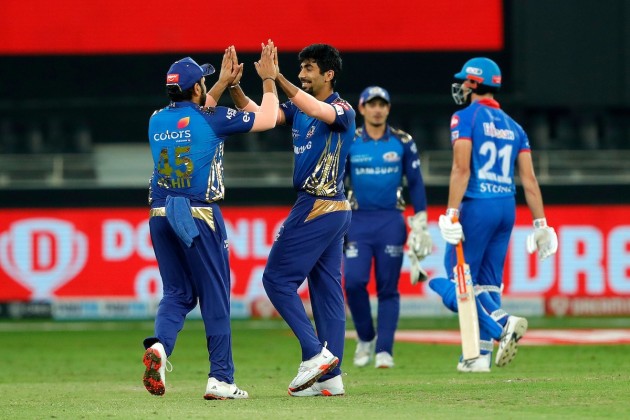 Total Domination and complete annihilation of opposition. If ever a T20 match was killed in just eight balls then it was on Thursday. Trent Boult started it but Jasprit Bumrah finished it. (FIXTURES & RESULTS | NEWS)

As a team it’s difficult to hold sway over Mumbai Indians. With so many match winners filled into the playing XI, someone will stand up and shoulder the responsibility. Delhi Capitals did hold a sway over MI albeit for just few overs. Between 8.5 overs to 11.3 overs there was no boundary. DC have now met MI thrice and lost thrice.

But then came a push back from the mighty MI. Ishan Kishan, Suryakumar Yadav notched up fifties and Hardik Pandya 14-ball 37 meant MI had 200 on board to defend.

This meant an all-out attack when the turn to defend the total came. Trent Boult just extended the Prithvi Shaw’s poor run at the top of DC batting line-up with a one that pitched in line and moved across. Shaw was waiting for in-swinger and ends up edging it to keeper.

Three balls later, Boult had Ajinkya Rahane caught plumb lbw and DC are zero for two wickets. Time for a breather one will think as over changes but no, DC run into Jasprit Bumrah.

On strike is Shikhar Dhawan, a man with two consecutive centuries for DC while opening. Bumrah gets through his defences with a swinging Yorker. Crashes on Dhawan’s foot and then uproots the off-stump.

Tomorrow night on the @SkyCricket IPL Cricket Show myself and @robkey612 discuss if @Jaspritbumrah93 is the best bowler across all 3 formats in world cricket right now .. any one beg to differ ?? pic.twitter.com/DLm36pnT7h

“I am okay with not getting wickets and winning the tournament. I don't look at the wickets. I have been given a role, and I try to execute that. Take it ball by ball. I felt the opening yorker was very important. I had decided I was going to do that. When it comes off like that, it feels great. Early wickets are important especially with the dew coming in,” Bumrah said after the match.

On Thursday Bumrah picked up Shreyas Iyer next. Iyer was looking good  and it went downhill from there before Marcus Stoinis’ fifty and Azar Patel cameo helped DC get to some kind of respectable score.

“When you have bowlers like Bumrah, it makes your life easy. And Bumrah and Boult are in top form. When they play for different countries and franchises, they have different plans. Hats off to them for buying into our plans and executing them so well," Rohit said.

With Boult missing from the field due to groin injury, it was left to Bumrah, who is now purple cap holder, to provide the breakthrough. Bumrah returned to kill the contest with a peach of a delivery which accounted for Stoinis, who had been waging a lone battle. The ball nipped back and beat Stoinis for pace and uprooted the middle stump. A ball later, Bumrah had his 4th wicket in form of Daniel Sams who managed to glove it to the keeper.

“I usually don't focus on the end result. Whenever I have tried to focus on the end result, it goes downhill. This is the first time I have played with Trent, our conversations have been very good. He is a very skilful bowler. We discuss different fields, the different ways to bowl, and what to do in different situations. I am not great on awards,” said Bumrah, who has 27 wickets this season.