Here's a look at some stunning bowling records created by the likes of Lasith Malinga, Anil Kumble, Amit Mishra, Harbhajan Singh, etc in the IPL 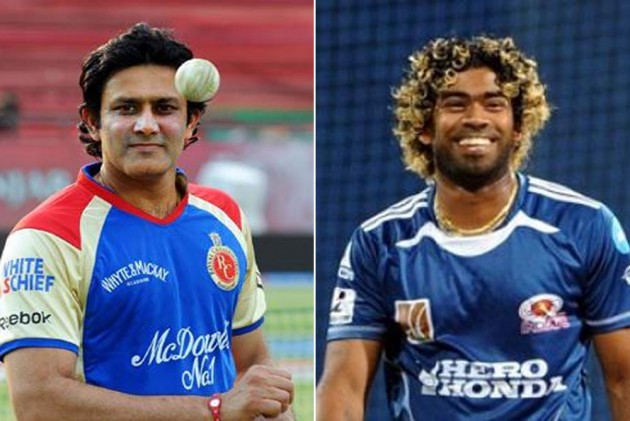 Yes, T20 is the worst cricket format for bowlers. It's a legend killer. Some of the world's greatest bowlers have been reduced to mere feeders against marauding batsmen. But some emerged unscathed from these lopsided T20 battles, and the records in the Indian Premier League (IPL) prove just that. (More Cricket News)

Before the start of IPL 2020 in the United Arab Emirates (UAE), we take a look at mystifying
bowling feats achieved by the likes of Lasith Malinga, Amit Mishra, Anil Kumble, Sohail Tanveer, etc.

In total, 14 bowlers have so far taken 100-plus wickets in IPL, of which 12 are Indian. Mishra holds the record for most wickets by Indian bowler - 157, while Malinga is the all-time leading wicket-taker with 170 victims.

Mishra can actually break that record this season as Malinga will not be playing. Another star who has opted out of IPL 13, Harbhajan Singh is in joint-third with fellow Indian spinner Piyush Chawla in the all-time list with 150 wickets each.

These four are the only bowlers to have taken 15-plus wickets. Dwayne Bravo, who recently became the first bowler to take 500 T20 wickets, is on 147.

IPL has witnessed 20 occasions of bowlers taking five or more wickets in an innings, of which three were six-wicket hauls.

Sohail Tanvir of Rajasthan Royals (RR) captured six for 14 against Chennai Super Kings (CSK) at Jaipur in the inaugural edition. Adam Zampa of now-defunct Rising Pune Supergiant took six for 19 against SunRisers Hyderabad (SRH) at Vizag in 2016 and Alzarri Joseph of Mumbai Indians (MI) claimed six for 12 in just 3.4 overs against SRH at Hyd-RGS last season in a dream debut, which is also the best bowling figures in the tournament.

These three are the only bowlers to have taken six wickets in IPL. And none of the bowlers are Indians - a Pakistani, an Australian and an Antiguan.

But this tournament has witnessed 139 occasions of bowlers capturing four or more wickets in an innings, comprising six-wicket, five-wicket and four-wicket hauls on three, 17 and 119 occasions respectively. And the list is dominated by MI and Kings XI Punjab (KXIP) bowlers -- sharing the record with 18 four-wicket hauls each. Royal Challengers Bangalore (RCB) and CSK closely follow with 17 such feats.

Breaking It Further Down

But possibly the best mystifying bowling record in the IPL belongs to former India captain and spin legend Anil Kumble. The current KXIP head coach bewildered everyone by taking five wickets for RCB in a dream spell against RR way back in 2008 at Cape Town.

And interestingly enough, Rohit Sharma (4/6 for now-defunct Deccan Chargers vs MI in 2009) and Steve Dwayne Smith (4/8 for now-defunct Gujarat Lions vs KKR in 2016) took toom four wickets each while conceding single-digit runs.

There are two more bowlers who have captured four or more wickets conceding single-digit runs.

There were four occasions when rival bowlers captured four or more wickets in the same match.

And there were two occasions when two bowlers took four or more wickets in the same innings.

In the previous 12 editions of IPL, bowlers have conceded 60-plus runs in an innings without taking a wicket on eleven occasions.

Basil Thampi of SRH conceded 70 runs without success against RCB in 2018. His figures (0/70 in four overs) at Chinnaswamy Stadium is the most expensive figures in terms of runs conceded. He is also the only bowler in IPL to concede 70 or more runs.

Second in the list of most expensive spells is Mujeeb Ur Rahman of KXIP against SRH in 2019 and Ishant Sharma of Delhi Capitals against CSK in 2013. Both registered similar figures - 0/66 in four overs.

So far 19 hat-tricks have been claimed in the IPL with Amit Mishra leading the charts with three, followed by Yuvraj (2). In total 16 bowlers have taken hat-tricks, including 10 Indians.