Sports IPL 2019: This Is Strange! The Moment MS Dhoni Gets Out, A CSK Supporter Becomes MI Fan – WATCH

IPL 2019: This Is Strange! The Moment MS Dhoni Gets Out, A CSK Supporter Becomes MI Fan – WATCH 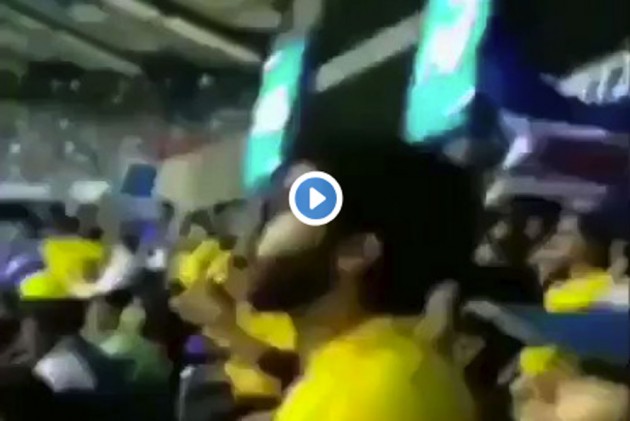 It's rightly called El Clasico of Indian Premier League (IPL). When Mumbai Indians (MI) hosted Chennai Super Kings (CSK) in the 15th match of the 2019 IPL at the historic Wankhede Stadium on Wednesday, fans turned up in thousands. After all, they were becoming a part of the first ever match between two three-time champions.

Only last year, the Mahendra Singh Dhoni-led CSK joined Rohit Sharma's Mumbai Indians as the two most successful sides in the history of IPL. And the Chennai-based team started their title defence on a rousing note, winning three on the trot even as Mumbai continued to indulge in their old habits of starting a season very very slow.

Fans, well aware of the stakes in the match, came prepared to make their presence felt. But one fan seemed to have left a lasting impression. Here's what he did. Once Dhoni got out, he removed the CSK jersey only to reveal that he was wearing an MI jersey underneath.

MI won the match by 37 runs to become the first team to register 100 wins in the IPL. Hardik Pandya was the star of the match. He first hit 25 off 8 balls to change the momentum, then returned to take three wickets, including that of Dhoni.