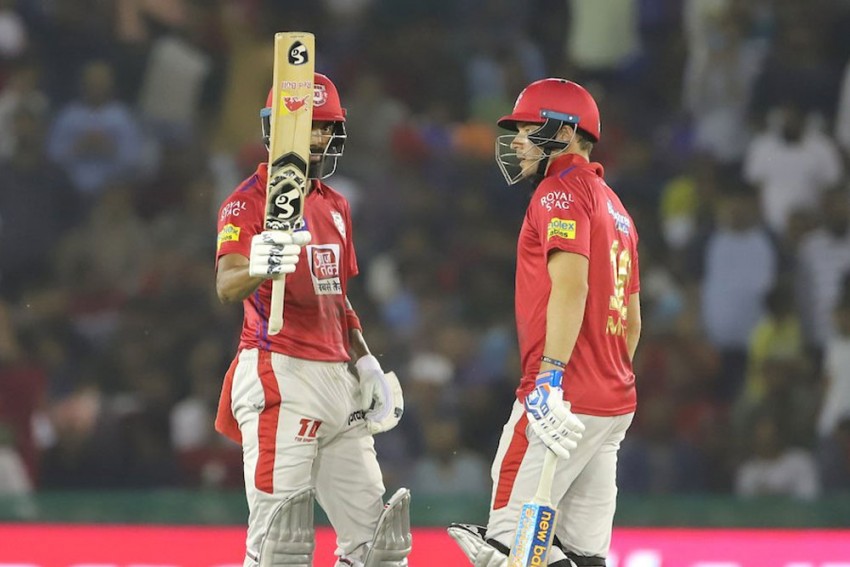 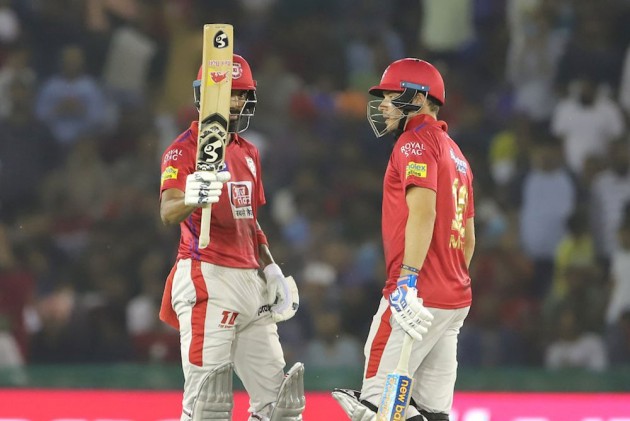 Chasing a tricky target of 177 runs, Kings XI Punjab achieved the target with eight balls to spare at Mohali on Saturday. In the first of Saturday's double-header, KL Rahul scored a good looking 71 off 57 balls after a sluggish start to his innings to anchor the chase. His opening partner Chris Gayle scored a quickfire 40 off 24 balls, then Mayank Agarwal played a blinder, hitting 432 off 23. Rahul and David Miller did the job.

Earlier, put into bat by R Ashwin, Mumbai lost skipper Rohit Sharma in the sixth over after a very good start at the score of 51. His opening partner Quinto de Kock hit a stroke full 60 off 39 balls to keep the visitors in the match, but Punjab bowlers take wickets in crucial stages. Thanks to a late Hardik Pandya flourish, 31 off 19 balls, helped Mumbai post 176/7. But it wasn't enough. They have lost two in three, yet another slow to a new season for the three-time champions.

Punjab skipper Ashwin's namesake Murugan was brilliant with the ball. 2/25.

Punjab will host Delhi Capitals in the season's first North-India derby on Monday, while Mumbai take on Chennai Super Kings at home on Wednesday.

7:39 PM IST: KL Rahul hit the first ball of the penultimate over for a four, beating the fielder at third man. A single and scores were leveled. David Miller took a single off the fourth ball to win the match, by eight wickets.

7:36 PM IST: Mitchell McClenaghan on with his final over. Eight runs from the over. KXIP were 171/2 after 18 overs, need another 6 in two overs. Also, fifty partnership between KL Rahul and David Miller in 26 balls. Miller hit the last ball for a four.

7:29 PM IST: Jasprit Bumrah on with his third over. A dot to KL Rahul, then a double. It was followed by back-to-back fours, first through cover then to fine leg. 11 runs from the over. Bumrah has so far leaked 17 from his three overs. KXIP were 163/2 after 17 overs. Easy for Punjab, need 14 runs in 18 balls.

7:22 PM IST: Old war horse Lasith Malinga called into the action as Mumbai needed all possible help. But it's still Punjab in the driver's seat. KL Rahul, who started his innings, ever so slowly, has brought his fifty with a four off the fifth ball. He pulled it to the fine leg boundary. Rahul took 46 balls to reach the mark. 12 runs from the over. KXI Punjab were 152/2 after 16 overs. Now 25 needed off 24.

7:15 PM IST: KL Rahul played a brilliant shot for his first six, over backward point boundary. Hardik Pandya's clearly struggling. After that first-ball six, a single then two wide deliveries. Rahul hit the fourth legal delivery for a four, cracking shot, to beat the fielder at cover. A single, then David Miller, who was applauding his partner, got into the act bu hitting the last ball for a four to the fine leg boundary. 19 runs from the over. KXIP were 140/2 after 15 overs. They need another 37 runs from 30 balls. Time-out.

7:03 PM IST: KL Rahul is holding the other end even as Mayank Agarwal, who came into bat in the eighth over, has outscored him. Rahul unbeaten on 30 off 35 balls, with a single four. Some patience. Agarwal was batting on 35 off 18. Six runs from the 13th over. KXIP were 109/1 after 12th.

6:58 PM IST: Mayank Agarwal continued to score in a brisk pace. He just hit Krunal Pandya for a six, clearing the long-on fence. That happened off he fourth ball. 12 runs from it. KXIP were 103/1 after 12 overs.

6:54 PM IST: Seven runs from Mitchell McClenaghan's third over. Lots of running for KXIP batsmen. They were 91/1 after 11 overs and need another 86 runs.

6:51 PM IST: Another good over for KXIP. 11 runs from Krunal Pandya's second over. Mayank Agarwal hit the second ball for a four, cut past backward point. KXIP were 84/1 after 10 overs.

6:46 PM IST: Mayank Agarwal has taken over from just departed Chris Gayle. Two fours, both brilliant cricketing shots, to take 12 runs from Mayank Markande's first over. KXIP were 73/1 after 12 overs.

6:41 PM IST: Huge wicket. Krunal Pandya got the job done, and it will his little brother immensely. Chris Gayle (40 off 24)went for another biggie, but it traveled only as far the long-on boundary rope, where Hardik took the catch. FoW-53/1 (7.2 Over).

Nine runs and a wicket from the over. Mayank Agarwal, the new man, didn't take long to hit his first boundary, a four, off the last ball. KXIP were 61/1 after eight overs.

6:35 PM IST: Just wow! Chris Gayle has smoked Hardik Pandya, and the India all-ready looked lost. Only two sixes, but that's what Gayle sixes can do to a bowler. 14 runs from the over. KXIP were 52/0 after seven overs.

6:27 PM IST: Just two runs from Jasprit Bumrah's second over, a single each to Chris Gayle and KL Rahul. KXIP were 38/0 after six over. Mandatory power-play over.

6:23 PM IST: Chris Gayle is taking care of the chase. He has hot Lasith Malinga for two fours. First one was a sublime drive to long-on boundary, then the second was through the gap in the cover area. Nine runs from the over. KXIP were 36/0 after five overs.

6:17 PM IST: Jasprit Bumrah got his first over in the fourth over. Four dot balls to KL Rahul, then the Punjab opener played a sublime cover drive for his first boundary. That's all from the over. KXIP were 27/0 after four overs.

6:13 PM IST: Mitchell McClenaghan on with his second over. KL Rahul took a single then Chris Gayle hit the next two balls for sixes. First one was a huge six, some 101 metre-long biggie over mid-wicket. The second one sailed over mid-on. Two more singles and 15 runs from the over. KXIP were 23/0 after three overs.

6:04 PM IST: Mitchell McClenaghan started the proceedings. A single off the first ball as KL Rahul angled it down the third man. A huge LBW shout followed as Chris Gayle got beaten by the pace. Three dots then a four, guided over the cordon, for a four. Five runs the over.

5.35 PM IST A late onslaught from Hardik (31 off 19)  has powered MI to  176 for 7 in 20 overs.  Shami looked erratic with his line and length today. MI have piled upon his lose deliveries and put it into the stands. Shami managed to pick up Hardik in the last over after being hit for a six off the first ball.  Mumbai have set a target of 177 for KXIP. This is going to be an interesting chase. MI 176/7 in 20 Overs. Target: 177

5.26 PM IST: Pollard goes high and he's been caught by Mayank. That was a well-disguised Knuckleball from Tye and Pollard miscues it. He s gone for 7 runs.  FoW.146/5 (17.1 Overs). Mayank pulls off a wonderful catch at long off.  Both the Pandya brothers are now in the middle.

5.15 PM IST: KXIP have managed to put the screws on the run rate. Will Pandya be able to repeat his heroics yet again. The seamers have been very expensive today. Thanks to both the Ashwin's, who have kept the batsmen under check.  At the end of 16 overs, MI were 137 for 4. And it is a strategic timeout.

5.10 PM IST: With six overs to go, the platform is set for incoming heavyweights Pollard, and Pandya. MI will be aiming to reach somewhere close around 190 to 200.  M Ashwin has been exceptional today.  He is into his final over and picks up Yuvraj Singh. It was the wrong one and Yuvi falls for it. Went for the sweep shot and the cherry lands safely into the hands of Shami at deep backward square leg. Yuvi departs for 18 runs. FoW 126/4 (14.4 Overs).  M Ashwin finishes his spell with the returns of 2/25.

4.55 PM IST:  Vintage Yuvraj is back. He s taking Tye for a toss. An excellent drive followed by an elegant straight drive. No wonder he has rolled back the time. Mumbai brings up their100.  Kock hits one in the air and it's a four. He brings up his 50 off 35 balls. At the end of 12 overs, MI were 106/2

4.48 PM IST: Short ball from Shami and QDK buries it into the stands. This is probably going to be a high scoring game.  The South African has made his intentions clear. He is not going to play a patient game; He is going on all attack mode at the opposition. De Kock is nearing his fifty. After 10 overs, Mumbai were 87/2.

4.40PM IST: de Kock looking in great touch. The southpaw cuts R Ashwin for a four and reaches 1000 run landmark in IPL. He follows it up with a couple of boundaries in the next over as he comes down the track to M Ashwin and slams two fours.  Its the end of 9 overs and its a time out. Mumbai were 76/2 after 9 overs.

4.30 PM IST:  Suryakumar Yadav comes into bat and gets going with a couple of boundaries. His journey is shortlived as he is trapped in front by Murugan Ashwin. It was a slider and he was caught plumb in front of the wicket. Yadav departs for 11. Fow 62/2 (6.2 Overs). Yuvraj Singh walks into the middle. He would be hoping to make it big given Mohali is his home ground.

4.25 PM IST: Viljoen comes into the attack and strikes the first blow, as he traps Rohit Sharma leg before the wicket. The MI skipper went for a wild slog and missed the ball completely. The South African is jubilant. Rohit departs for  32 (18) FoW-51/1 (5.2 Overs)

4.20 PM IST:  Andre Tye is introduced into the attack. And Rohit looks in sublime touch. Three boundaries were scored off the over.  An elegant backfoot punch all the way to the boundary sums up the class Rohit possesses.  Mumbai were 50/0 after 5 overs

4.05 PM IST: At the end of three overs, MI  have scored decently as they have a score of 28 for no loss on board. Rohit Sharma and Kock have started the innings pretty well with a couple of boundaries to their name.  Ravichandran Ashwin has

3:45 PM IST: And that brought us the Chris Gayle-Lasith Malinga stats. The Windies great has a strike-rate of just 73.44 Malinga in IPL (47 runs from 64 balls, including 38 dots). Malinga got him out once.

3:41 PM IST: What about this captain vs captain stats: Rohit Sharma's batting average in IPL against Ravichandran Ashwin not great but not bad. He has scored 73 from 87 balls and was dismissed only once.

3:33 PM IST: R Ashwin wins the toss and KIXP will bowl first against MI. One change for Punjab, Mumbai are unchanged. This Mohali pitch is expected to be sporting. And average first innings score is 169.

.@lionsdenkxip captain @ashwinravi99 wins the toss and elects to bowl first at Mohali.@mipaltan skipper @ImRo45 says that he would have batted first. #KXIPvMI #VIVOIPL pic.twitter.com/ZXHEHCOLhZ

2:58 PM IST: Spotlight, as expected will be on Rohit Sharma, Jasprit Bumrah, Chris Gayle, Hardik Pandya and of course Yuvraj Singh. But Varun Chakravarthy can be a dark horse today despite his not so comfortable IPL debut. He's still a mystery spinner. Here's WHAT a vintage Yuvi did in Bengaluru.

2:38 PM IST: MI lost their first match in Delhi with Rishabh Pant toying with the visiting bowlers, then beat Royal Challengers Bangalore in Mumbai. KXIP started their campaign with a controversial win against Rajasthan Royals at home, then were blown away by Andre Russell in Kolkata. As things stand now, KXIP top the bottom half of the eight-team table, by virtue of better run rate. MI are second, just above two winless sides RCB and RR. At the top half, its KKR, CSK, DC and SRH at the top.

2:30 PM IST: It was a league double for Mumbai Indians in this fixture last season, In the first match in Indore, Krunal Pandya helped with the bat, scoring 31 from 12 balls, as MI chased down 174. At home, they Mitchell McClenaghan Mumbai defended 17 in the last over to win by 3 runs.