Chennai Super Kings move back to the top of the points table after their six-wicket win over SunRisers Hyderabad. Shane Watson was back to his best and completely smashed Rashid all over the park. His 96 took the game away from SRH. Follow highlights of CSK vs SRH match here: 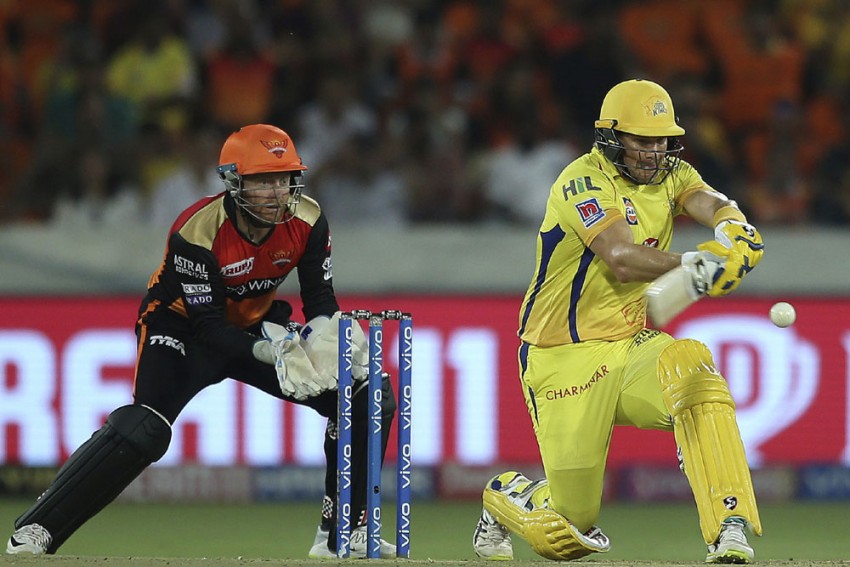 Welcome to the highlights of the Indian Premier League (IPL) 2019 match between Chennai Super Kings (CSK) and SunRisers Hyderabad (SHR).

Here are the highlights of CSK vs SRH IPL match:

Chennai Super Kings now have 8 wins in the ongoing tournament and now sit comfortably on top of the table. They have probably sealed their play-off spot, just like they have done in all the seasons. A good tactical move by Dhoni and Fleming to get back Harbhajan today, who was good with the ball.

SRH was in the game with the early dismissal of Faf. But Shane Watson, who until now had had a very poor season, played splendid innings as he smashed SRH bowlers all over the park. Rashid Khan was taken for a ride by Watson. Watson managed to get the better of the Afghan spinner and his assault spoilt Rashid's figures. And as usual, CSK tends to take the game in the last over and they won it yet again.

Watson started the chase as he played down an entire first over. A maiden over for Bhuvi at the start. And then Watto suddenly found his lost touch and took CSK within distance of the target. Missed his century by 4 runs. Raina played a crucial knock as he pressed the accelerator in the powerplay. CSK continue to dominate at home.

SRH will be happy with the way Manish Pandey played today. He was brilliant in the powerplay and carried on till the end. Bairstow will be flying back after this game and probably Martin Guptill will come in. Probably Pandey can be their No.3 till Kane Williamson comes back.

CSK is one team who keep their playing XI consistent. They rarely change their team. Watson was poor all season, CSK kept backing him. And he won the game for CSK today. Watson who received the man of the match, thanked MSD and Fleming for having faith in him. He also adds that just like in the past, other teams would have benched him if he was out of form. So he wanted to pay back for that faith that the management had shown in him.

11:33: Sandeep to bowl the last over. Kedar goes for a big shot in the deep mid wicket region. Pandey almost saves it from crossing the line. But he has just stepped over the fence with his ball still in the hand. Six runs. Kedar smashes it straight to the mid-off. Batsmen pick up a single. Short ball and Rayudu goes for the pull and it is a top edge and he is caught at mid-off. Bravo makes his way into the middle. Kedar Jadhav hits it straight, the ball hits Bravo and hits the stumps. Batsmen scamper for a run. Game over. CSK win by 6 wickets.

11:18: Khaleel is back into the attack. Watson pulls it over deep mid wicket for a six.  Rayudu goes over the top and picks up a couple in the extra cover region. CSK 160/2 after 17 overs.

11:13: Rashid is into his last over. Rashid started the fight in his first over with the stare and some exchange of words with Watto. And Watson is giving the stare back to him after every shot. Smashes it over long on for a huge six. Watson is tearing Rashid apart. Watson goes down on one knee and smashes it to the backward square for a boundary. 15 runs off the over. CSK 150/2 after 16 overs. Rashid Khan 4-0-44-1. Timeout. Watson 89*(50), Rayudu 15*(15)

11:08: Bhuvi is back into the attack. Yorker from Bhuvi. Watson opens the face of the bat and places the ball between point and short third man for a boundary. 8000 T20 career runs for Shane Watson. Watson cuts and gets and the ball runs down the third man region for another boundary.  11 runs off the over. CSK 135/2 after 15 overs.

10:53:  Sandeep is back. Watson cuts it between the point and short third man for a boundary. Waston fetches it from outside off stump and pulls it in the deep mid-wicket region for a boundary. Short ball and it was climbing. But Watson stands tall and pulls it over deep square leg for a maximum. Fifty for Shane Watson.  19 runs off the over. CSK 104/2 after 12 overs.

Some serious hitting here from @ShaneRWatson33. Brings up his FIFTY with a maximum.#CSK 102/2 after 11.4 overs pic.twitter.com/GCPbfjL2EE

10:45: Rashid Khan with a wrong one and Raina misses it completely. Just went past the stumps. Raina misses a leg spinner and it again goes just above the stumps and Bairstow misses it too. 4 byes. Rashid has the last laugh. Raina is stumped. Tried to run it down leg side. Missed it and Bairstow easily takes the bails off. Raina departs for 38 off 24 balls (6x4,1x6). CSK 80/2 after 10 overs.

10:38: Sandeep is back into the attack. Watson goes for a wild swing and the edge flies to the keeper's right. Bairstow dives but is unable to hold on to it. 5 runs off the over. CSK 73/1 after 9 overs.

10:30: Rashid into the attack. Full-length delivery and Watson drives it straight past Rashid for a boundary. Too close to cut and Suresh Raina manages to get the ball past a diving Warner at slip and the ball runs down for a boundary. 10 runs off the over. CSK 68/1 after 8 overs. Timeout. Watson 33*(26), Raina 34*(15)

10:25: Shakib is back. Half-tracker and Watson goes low, swivels and pulls it over deep square leg for a maximum. Sailed into the stands. 9 runs off the over. CSK 58/1 after 7 overs.

10:20: Sandeep Sharma into the attack. Short ball and Raina pulls it to the deep mid wicket region for a boundary. Strays down leg and Raina flicks it past the fine leg fielder for another four. Raina comes down the track. Tries to go over covers. It takes an edge and flies over short third man for another four. Three fours on the trot. Again angling down pads and Raina gets the ball past short fine leg. And a six to finish the over off in the same direction. Big big over. 22 runs coming off it. CSK 49/1 after 6 overs.

10:15: Change of ends for Khallel. Slow bouncer and Watson pulls it for a six over deep square leg. The ball sailed over the fielder in the deep. Watson goes over extra cover for a boundary. CSK 27/1 after 5 overs.

10:10: Shakib is into the attack. Watson goes for the sweep and gets a boundary in the square leg region. CSK 16/1 after 4 overs.

10:05: Bhuvi continues. Faf knocks it to mid off. Hooda gets a direct hit. It was a tough decision. But the third umpire gives it out. Faf raises his hand in disbelief. Faf departs for 1(7). Suresh Raina walks in at No.3. Glorious straight drive and the ball goes past mid off for a boundary. CSK 8/1 after 3 overs.

10:00 PM IST: Khaleel into the attack. Four dot balls. Faf punches it in the covers and scampers for a single. Watson gets an edge that goes to the third man. Both batsmen off the mark. CSK 2/0 after 2 overs.

9:55 PM IST: Bhuvneshwar Kumar to start the proceedings for SRH. Great over by Bhuvi. It is a maiden over. Watson is struggling with the out swingers. CSK yet to open their account.

9:28 PM IST: Deepak Chahar gets his first wicket of the night. He had Vijay Shankar caught by Ravindra Jadeja. Seven runs from the over. His figures:1/30. SRH-167/3 after 19 overs.

8:44 PM IST: 12 runs from Ravindra Jadeja's second over, including a six hit by David Warner over cow corner. SRH-81/1 after nine overs.

8:33 PM IST: Bowling change. Ravindra Jadeja on. And he's gets welcomed by David Warner with a four to long on. Nine runs from the over. SRH-63/1after seven overs. Time-out.

8:28 PM IST: Harbhajan Singh on his with his third over. A single then Manish Pandey hits the second ball for a four. A rare dot, followed by a double. Fifty for SRH 34 balls. Pandey follows it up with a four through point. 11 runs from the over. SRH-54/1 after six overs.

8:25 PM IST: Deepak Chahar continues with his third over. David Warner hits the first ball for a four and Manish Pandey drills the third ball for a straight drive. Chahar's lucky not to get hit by the ball. Faf du Plessis then stops a certain boundary with a sliding effort at deep. Saved one run. A quick single to end the 13-run over. SHR-43/1 after five overs.

8:19 PM IST: Manish Pandey hits the last ball of the over, over long off. The over started with a six, with David Warner hitting Harbhajan Singh clobbering over long-on. 15 runs from the over. SRH-30/1 after four overs.

8:15 PM IST: Deepak Chahar continues with his second over. Six runs from the over, including a four hit, by David Warner off the fourth ball. SRH-15/1 after three overs.

8:11 PM IST: Manish Pandey is the new man. And he hits the first batt for a four. Nine runs from the over. SRH-9/1 after two overs.

8:08 PM IST: Brilliant stuff from Harbhajan Singh. The veteran offie strikes in his first over. He had Jonny Bairstow caught behind for a duck. FoW-5/1 (1.3 Over). Not so good a parting gift from the Englishman.

8:05 PM IST: Deepak Chahar starts the proceedings in Chennai. Four runs from the first over. Jonny Bairstow and David Warner open for the visitors.

7:40 pm IST:  Mahendra Singh Dhoni has worked his charm with the coin again and won the toss.  Dhoni has opted to field and Surisers Hyderabad will bat in the first inning of the match.

Here are the playing eleven from both the squads: