Gautam Gambir, who joined the Bharatiya Janata Party (BJP) on Friday, had said that Virat Kohli has been "lucky" to have survived in a result-oriented franchise like RCB despite never winning the title in his eight years as skipper. 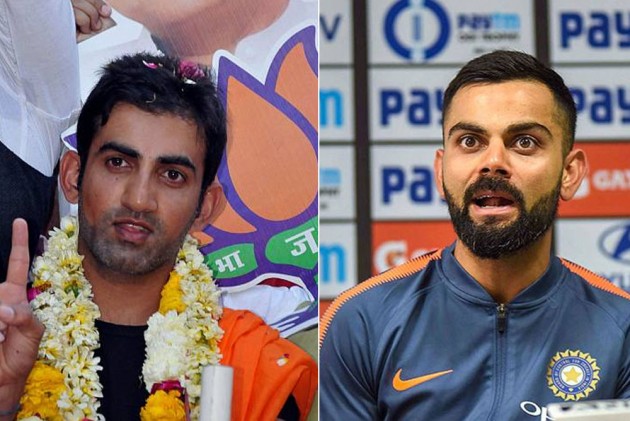 Fleming said Friday, differing with Gautam Gambhir's viewpoint that one can't say Kohli and Mahendra Singh Dhoni in the same breath, as India's captain has not won the tournament.

Former India opener, who joined the Bharatiya Janata Party (BJP) on Friday, recently said that Kohli has been "lucky" to have survived in a result-oriented franchise like RCB despite never winning the title in his eight years as skipper.

Why Gambhir And BJP Are Made For Each Other?

"One man doesn't win the IPL. It's a tough competition to win. It's getting tougher because teams are a lot smarter. Players are conditioned to playing in the IPL. Coaches and managers are getting more shrewd in how they buy and put together teams," Fleming said.

"There's a number of things that go towards it. One thing I do know is that when there's a challenge put in front of him, he meets it."

Fleming's admiration for the Indian batting maestro did not stop there and said retaining the trophy they won last year will be very difficult.

"His expectation with this team will be to give it a good run and I'm sure, as most other franchises will be wanting. Winning competitions is a byproduct of how you lead your team so there's a challenge there.

"But as I say they're really looking (like) a good team. Most teams on paper are outstanding so we have got our work cut out to win it again, we will be giving it a good shot as well," he added.

The former New Zealand captain said the loss of the team's South African paceman Lungi Ngidi was a big blow.

"Ngidi is a big loss. He was the find last year for us, he bowled really well. We got a squad that can cover his absence. But, sometimes players are a little bit special. The onus is on the other overseas options. We are taking our time on his replacement at the moment."

Fleming was speaking on the eve of the IPL-12 opener between CSK and Royal Challengers Bangalore at the MA Chidambaram Stadium. He said South African captain Faf du Plessis, leg-spinner Imran Tahir and New Zealand all-rounder Mitchell Santner had arrived and were available for selection.

"There is a real emphasis on starting the tournament well. Last year, we won a couple of games which could easily have gone the other way. We know the importance of a good start. We are certainly not desperate to win it and it's just an opportunity we are looking forward to," he added.

On wrist spinners doing well in recent times, Fleming said there were a "few reasons" and added they have got clever as well.

"I think there are a few reasons. One is that there's a lot of younger players now on the big stage who maybe haven't played as much first-class cricket or developed skills that used to go along with an apprenticeship with batting, and part of the batsmanship in my era and before was reading the bowler, watching the ball.

"Now it's about power. And ball striking. So there's a lot more emphasis on power. Whereas probably in my era, it was about defence first. So there's been a big shift about the way young players play the game. A lot of those players are now emerging and playing big parts in the IPL."

"Wrist spinners have got clever as well. They play a role where the batsmen have to take risks. Before T20 you could take your time with wrist spin, now you've got to be aggressive and with the ball going both ways, if you don't know, it can be your downfall. I think they're good weapons to have," he added.