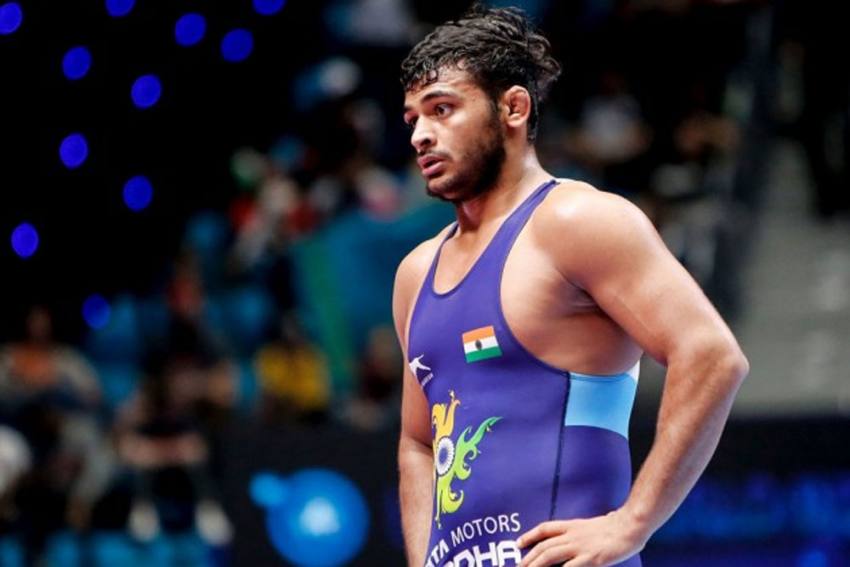 t has been learnt that the 2019 World championships bronze-winner Deepak Punia had suffered the injury two-three days before leaving for Warsaw during practice.
Courtesy: Twitter
PTI 2021-06-08T17:13:40+05:30 Injury Scare For Olympic-bound Wrestler Deepak Punia, Pulls Out Of Poland Open

Olympic-bound Indian wrestler Deepak Punia on Tuesday pulled out of the Poland Open here to avoid aggravating his left-elbow injury that he carried into the last Ranking Series event before the Tokyo Games. (More Sports News)

Punia was to take mat for the 86kg event but forfeited his quarterfinal against American Zahid Valencia. It has been learnt that the 2019 World championships bronze-winner had suffered the injury two-three days before leaving for Warsaw during practice.

READ: With Focus On Tokyo, Bajrang Punia Opts For Training

"It's a minor injury, there is nothing to worry about. He sustained it while practising in India. We just did not want to aggravate the injury. The Federation was kept in loop. He is still practising, so there is nothing worrisome," national coach Jagmander Singh told PTI.

Singh also dismissed suggestion that it was a made-up injury to get a specific draw at the Olympics.

"Nothing like that. We are not looking that much ahead," he said.

The Wrestling Federation of India (WFI) confirmed the sequence of events.

"Yes we had given him a choice. We do not want to put pressure on wrestlers, Olympics are near, so no point in taking risks," said WFI Assistant Secretary Vinod Tomar.

Punia will remain with the team till July 5 for the training camp that has been organised by the Polish Federation.

The WFI is also trying to negotiate with Turkey, Romania and Russia to organise training camps for India's Olympic-bound wrestlers.

With Punia pulling out, only three Indians are now left in the competition.

Ravi Dahiya, who qualified for the Games in 57kg, will compete in the 61kg category in this event.

Vinesh Phogat (53kg) and Anshu Malik (57kg) will compete on Friday in the women's event.

Bajrang Punia had also decided to miss the event, preferring to train in Russia instead. Seema Bisla (50kg) and Sonam Malik (62kg) did not travel to Warsaw as they too are nursing their respective injuries.

Sumit Malik (125kg) has been suspended by the world body for failing a dope test in Sofia, where had made the cut for the Tokyo Games.