India are in Pool A along with Olympic champions Argentina, Australia, New Zealand, Spain and Tokyo Olympics hosts Japan 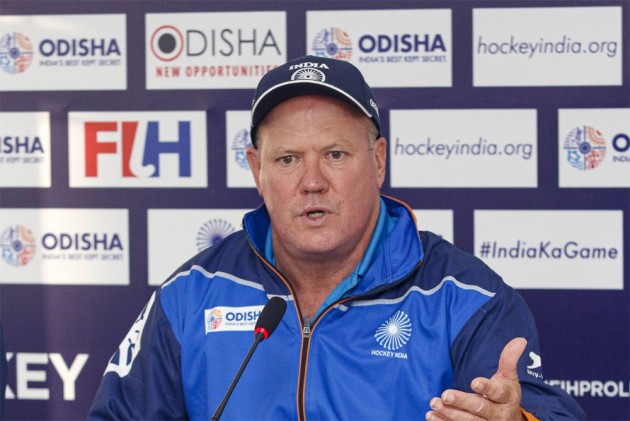 India's men's hockey coach Graham Reid is in awe of the "mental resilience" shown by his wards amid the COVID-19 pandemic and feels it could well make all the difference when the side chases its first Olympic medal in over four decades in the upcoming Tokyo Games. (More Hockey News)

Reid is of the view that Indians, in general, are unaware of their own mental fortitude.

India reached the quarterfinals of the 2018 World Cup in Bhubaneswar and performed well in the FIH Hockey Pro League earlier this year, beating reigning Olympic champions Argentina before a second wave of the pandemic disrupted the world number four side's schedule.

"I think Indians don't really understand how mentally resilient they are, how good they can be. So I think that part of it is really important," Reid said in virtual media interaction from Bengaluru, two days after the announcement of a 16-member Tokyo-bound squad.

"And don't underestimate the effect that will have when the chips are down in Tokyo. I think I take a lot of solace from that.

"As a coach, you always want to do more but then I've also have had the confidence in what we have been doing over this period. So that's the mentality we have to go into Tokyo with."

The restrictions imposed on travellers from the country following the second wave meant that the Indian team was stuck at the Sports Authority of India's Bengaluru Centre.

While there, the 57-year-old tactician has prepared 10-minute videos of each of his players' life stories so as to "understand more about their stories."

"We did a 10-minute video with each of them with just just myself and the players, where they told their stories and that's very powerful," Reid, who coached Australia during the Rio Olympics, said.

"I intend to bring them out in the next three weeks to get all our guys to understand the sort of things that each player has been through during their life," he said.

"I've been very happy to be honest. What has been really good in these last 15 months is having the ability to be able to get to know the players. That's something perhaps that often you don't get to do as a coach."

Fourth-ranked India will begin their Olympic campaign against New Zealand on July 24.

India are in Pool A along with Olympic champions Argentina, Australia, New Zealand, Spain and hosts Japan.

It's been more than four decades since the former giants won an Olympic medal -- the last being a gold in the 1980 Moscow Olympics. India boast of 11 medals, including eight gold, two silver, and a bronze dominating the scene in yesteryears.

Reid is hopeful of ending the medal drought this time.

"What we've been talking to the players a lot about is that if you look at the 12 teams that are going to the Olympics. In the last two years we've played and beaten all 12 except for Canada we haven't had a chance to play Canada.

"I think that's a really important point to note. If we play well, if we do our things and we are definitely aiming to jump onto that podium," he said about their target.

"You have to take time, one game at a time when we're trying to get through to the quarterfinals...To be in that final game at the end of the tournament is what everyone's trying to do. That's no different to us," Reid said.