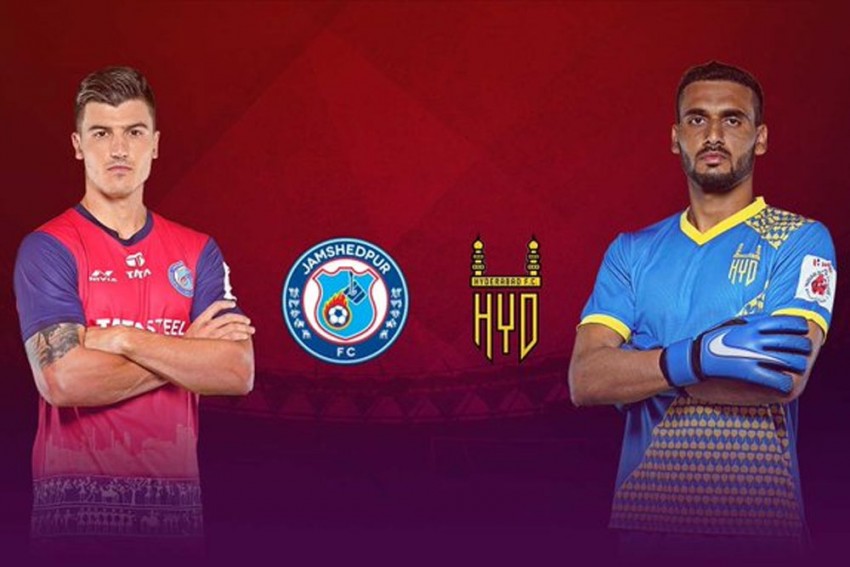 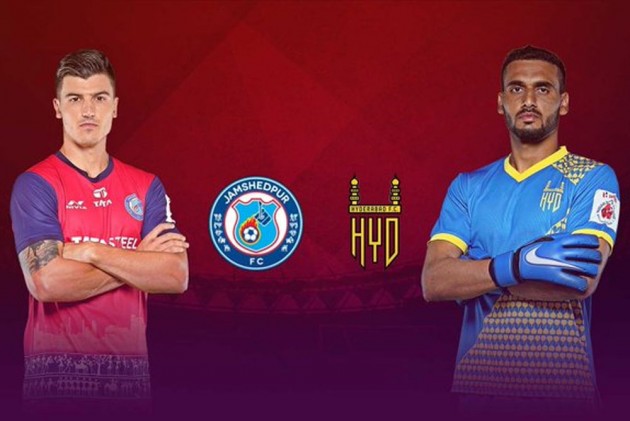 A brilliant display from a confident side against an outfit that is having a tough take-off. Jamshedpur FC go top of the Indian Super League (ISL) 2019-20 table with two wins in two. A 3-1 win at home with two youngsters Farukh Choudhary and Anikhet Jadhav showing the future of Indian football. Choudhary won the man of the match award for a goal and an assist. Jadhav, one of the stars of India's U-17 World Cup, came as a substitute and score a brilliant goal. Sergio Gastel scored the third for the winners, while Marcelinho got the consolation goal. Hyderabad are at the opposite spectrum with two defeats, conceding eight goals. Tomorrow, we have Chennaiyin FC and ATK  [Read Preview HERE] taking on each other in a clash of former champions at Chennai. That's all for tonight.

Get highlights of Jamshedpur FC vs Hyderabad FC match here:

90+4' - What's that for? Sub for Hyderabad. Abhisek Halder in for Mohammad Yasir.

90+2' - Keagan Pereira wasting time. Takes the ball to the near corner but loses possession.

89' - Then, a counter for Jamshedpur. Another half-chance with Sergio Castel in the action. Good release from Anikhet Jadhav. Moments ago, Robin Singh was seen going for the goal, which ended up as a skier.

88' - Hyderabad keep the pressure on. Meanwhile, the hero of the match is Farukh Choudhary. One goal and one assist. Deserving. And sub. He makes way for Sumeet Passi.

85' - A good looking move from Hyderabad. Win a throw-in in the final third. From an Ashish Rai cross, Adil Khan goes for the spectacular, a bicycle kick. But ends up injuring Robin Gurung. Medical attention for Jamshedpur defender.

82' - A free-kick for Jamshedpur just outside the Hyderabad box. But Piti can only produce a skier, way over the bar.

80' - Then, Keegan Pereira forces a save from Kamaljit Singh. Hyderabad are all over the place. More goals coming!

76' - And what? Aniket Jadhav releases a pin-point pass for Farukh Choudhary, who goes with a header. Kamaljit Singh does well to avoid a fourth.

75' - GOAL! Sergio Castel produces probably the best goal of the season far. The Spaniard collects the ball from a Memo long pass than beats Matthew Kigallon and Gurtej Singh by taking a slow turn and scores with hiss weeping leg. No chance for Kamaljit Singh.

74' - Lucky, Marko Stankovic. He pulls back Piti and concedes a free-kick. Yellow card written all over it. Another one and was he was going home.

72' - A throw-in for Hyderbad and Robin Singh gets the ball inside the box, and shoots. But wide.

69' - Another corner for Jamshedpur. Gurtej Singh clears it away.

68' - Corner for Jamshedpur from a brilliant Piti-Sergio Castel play. Nothing comes off it.

65' - Sub for Hyderabad. Abdul Gani Nigam in for Marcelinho. That's a shocker, removing their best player.

64' - Marcelinho wins a foul thanks to a Memo tackle. Free-kick for Hyderabad. But the Brazilian hits the wall.

59' - Aniket Jadhav almost scored inside a minute after entering the field. He just needed to slot home, and his header ballooned. A very good cross from Sergio Castel. Wasted chance.

57' - Sub for Jamshedpur. Aniket Jadhav in for Isaac Vanmalsawma.

55' - Sahil Panwar is stretchered off. Ashish Rai replaces him.

53' - Piti wins the ball from a Hyderabad throw, but fails to find his intended target. Sahil Panwar in on the floor after a run-in with Sergio Castel.

51' - And after that early burst, Hyderabad are now losing possessions pretty easily. Farukh Chaudhary gets a good ball in the right flank. But, Matthew Kilgallon does well to block his cross.

50' - Gurtej Singh concedes a free-kick. Jamshedpur just about manage to create a half-chance. A though pass for Robin Singh, but too heavy.

47' - What a start from Hyderabad. Robin Singh gets a clear sight on the goal but his shot ends up deflecting for a corner.

Plenty of chances for dominant Jamshedpur, but take the break at 1-1 after Marcelinho's opportunistic but brilliant finish. Earlier, Farukh Choudhary scored the opener. Jamshedpur hit the target five times from eight attempts with 52% possession, against one off two for visitors.

45+2' - That goal at the stroke of half-time spoils all the good effort from Jamshedpur.

45+1' - GOAL! Marcelinho's delivery fails to impress. But from the following play, the Brazilian equaliser by beating Subrata Paul to the near post.

44' - Good defensive work from Hyderabad. But a long ball wastes the play. Robin Singh, patrolling alone in the final third, can't reach to the ball.

42' - Optimistic strike from Isaac Vanmalsawma. But not good enough to test Kamaljit. Marcelinho and Piti in a little tussle.

40' - Another attempt for Jamshedpur, but Hyderabad do well respond with a quick counter-attack.

38' - Adil Khan and Marko Stankovic link up well to set up Marcelinho for a chance. Free-kick to Jamshedpur after a simulation from Pereira.

32' - Piti takes the corner but his delivery fails to find the intended target at the far post.

31' - Hyderabad quickly lose possession inside the Jamshedpur half. Nikhil Poojary, playing out of position at right-back, clears a dangerous ball. Jamshedpur launches another attack, win a corner.

29' - Two men down after a collision. Both Farukh Choudhary and Sahil Panwar go for header and end up clashing against eash other. Sahil has come off.

27' - Goal kick for Hyderabad after a loose play from the hosts. But the ball comes back to Kamaljit Singh. And he delightfully launches another long ball.

26' - A long ball from inside the Hyderabad half, and Robin Singh is caught offside.

25' - Marcelo Pereira tries a long ranger from some 25 yards, and misses the target. Ball sails over the bar.

24' - Mohammed Yasir takes control of the ball near the left sideline, and from the following ball, Hyderabad win another corner. Marcelo Pereira was on the ball. But a free-kick to Jamshedpur following a foul from a Hyderabad player inside the box.

21' - A very good delivery from Piti for Sergio Castel inside the Hyderabad box. But Castel is let down by his first touch. Goal kick.

20' - Hyderabad win a throw-in inside Jamshedpur half. Another one. Sergio Castel wins the ball back from Gurtej Singh, and links up with an onrushing Piti. Relatively easy take by Kamaljit Singh.

16' - Smart play from Sergio Castel. Draws a foul from Gurtej Singh. Free-kick to Jamshedpur. Farukh Choudhary again. He gets a header, targeting the top corner. Misses the target.

12' - Piti showing his class. Hyderabad facing a barrage of attacks from their hosts in the city of steel. And the first yellow card. Marko Stankovic lunges on Aitor Monroy. Some theatrics from Jamshedpur player.

10' - Another dangerous play from Jamshedpur. Piti's high boot. He argues with the referee. Then, the hosts get a very good chance. Kamaljit Singh spills the ball in the first attempt, then goalline clearance. Farukh Choudhary can't believe it. Then, Kamaljit Singh produces another brilliant save to deny Farukh again.  Kamaljit is down, getting medical assistance.

6' - Free-kick to Hyderabad. Dangerous play from Mobashir Rahman. Marcelinho goes direct, but not on target.

4' - Marcelo Pereira gets himself positioned deep inside the Jamshedpur half and gets the ball in a good spot. But early pressure from Jamshedpur from a counter-attack.

2' - Jamshedpur are looking for their first-ever back-to-back wins. Confident start from the Hyderabad. But the hosts win the ball back for the first and Piti releases one for Farukh Choudhary gets a good run on the left flank.

7:31 PM IST: Jamshedpur are in red and blue, win the toss and will attack from left to right. Hyderabad are in all yellow. Tonight's referee is Tejas Nagvenkar.

7:26 PM IST: Players are out. National Anthem coming up.

In Jamshedpur's first match against Odisha FC, the man of the match Farukh Choudhary forced an own goal off Rana Gharami in the 17th minute, but Aridane Santana produced a sublime volley to equalised after Bikash Jairu was sent off for a sliding tackle on ever-impressive Jerry Mawhmingthanga. Despite one man down, Jamshedpur dominated the proceedings at JRD Tata Sports Complex. Tireless Sergio Castel then scored the winner five minutes from the regulation time.

For Hyderabad, it was not the start they had expected. A 0-5 thrashing by ATK. Kolkata's Aussie import David Williams started with a brace, Roy Krishna joined the fun, then Edu Garcia scored his own double in the last 20 minutes coming in as a sub. Some of the Hyderabad players even forgot to run, chase the ball. Poor effort from the debutants.

This is the first meeting between Jamshedpur FC and Hyderabad FC, formerly Pune City FC. Jamshedpur and Pune have faced four times with Pune winning all four matches.

In the pre-match press conference, Hyderabad head coach Antonio Iriondo revealed that is team can still perform better. "The team is still under construction and we are still working on our style of play. The players made a great effort (against Odisha) and we are very happy with that. We are happy about the result, but we want to play better. At this point, we still have to improve. We didn't have the ball control then, but we had control of the match," he said.

Meanwhile, Phil Brown felt that Hyderabad can bounce back to winning ways. "We had some knocks after the first match. We were beaten 5-0 and it is not easy for the players when they go back home. It affects the mentality of the players. But we picked ourselves well, the group is okay," he quipped.

6:00 PM IST: The hosts won their opening match against Odisha 2-1, with a late winner from Sergio Gastel. Meanwhile, the visitors were crushed 0-5 by ATK in their first fixture. Jamshedpur head coach, Antonio Iriondo has a fully-fit squad except for midfielder Jairu, who is suspended due to a red card. He is expected to be replaced by Mobashir Rahman. Also, youngster Amarjit Singh Kiyam is still out due to a fractured wrist. The visiting head coach, Phil Brown will be without Rafa Lopez due to a thigh injury. Nikhil Poojary and Giles Barnes could also miss out due to fitness issues. Their new acquisition Nestor Gordillo is suspended till December.