Catch highlights of the 23rd match of the Indian Super League 2019-20 season, between Chennaiyin FC and Hyderabad FC here 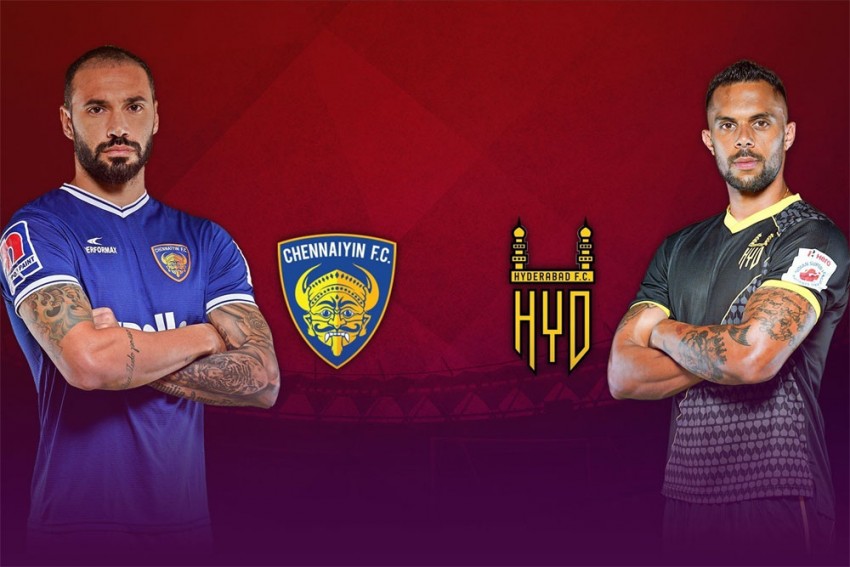 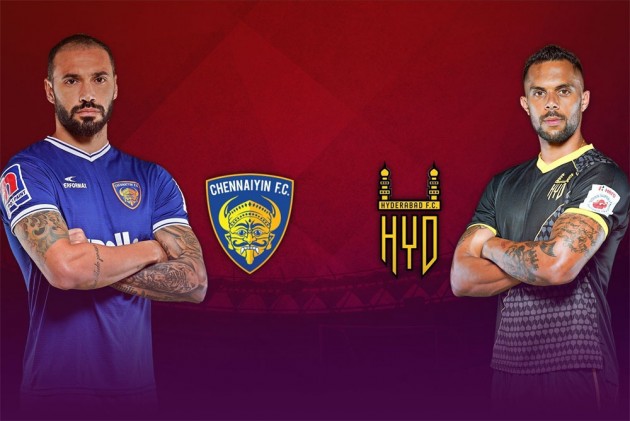 What a game we had. Chennaiyin FC finally won a match this Indian Super League (ISL) 2019-20 season in a thriller against newcomers Hyderabad FC at home. The two-time winners dominated the proceedings with Lallianzuala Chhangte running the show and also getting some rough handling from Gurtej Singh. Then, after 92 minutes of goalless action, Andre Schembri scored Chennaiyin's first goal of the season. Within minutes they conceded as Matthew Kilgallon buried one past Vishal Kaith only to see substitute Nerijus Valskis scoring the winner. All happening inside four minutes. Catch highlights here.

90+7' - And it's over. What a match. Chennaiyin finally wins a game this season.

90+6' - Wow. Another goal. Nerijus Valskis, who's been silent whole night, burst into the life and beats Kamaljit Singh with a fine finish. So, Chennaiyin ara up and running again. John Gregory is celebrating. Just wow.

90+5' - GOAL! And what. Chennaiyin switch off and pay the price. A brilliant header from Matthew Kilgallon to beat Vishal Kaith.

90+2' - GOAL! Edwin Vanspaul wins a crucial header inside the Hyderabad half to allow Chennaiying to make another move. They lose the ball for a moment, then keep the pressure on. Then, they break the jinx. A brilliant team goal. Boy, they need that. And re Schembri, the sub, beats three defenders and drills one to the near post. And he's booked for shirtless celebration. And why not. This is their first goal in 769 minutes.

90' - Rafael Lopez Gomez and Andre Schembri fight for the ball and Hyderabad player is down.  Five minutes added on.

87' - Meanwhile, Mohammed Yasir is quietly making his mark. Goes for the goal from a distance, missed though. Minutes ago, Chennaiyin skipper Lucian Goian was down, struggling with his hamstring.

85' - Abhishek Halder on for Marcelo Pereira. And back-to-back corners for Chennaiyin. Someone, Hyderabad are keeping it clean.

84' - Gurtej Singh finally gets a booking. A red card should have done justice. After holding onto Dragos Firtulescu's shirt, he holds the neck of the Chennaiyin player. After the restart, Chennaiyin get another very good chance.

82' - Dragos Firtulescu shows his class, and wins a corner. And Chennaiyin's last SUB. Andre Schembri on for Rafael Crivellaro.  Firtulescu's corner, and another wasted chance.

80'  - Lallianzuala Chhangte's delivery. Chennaiyin seek ways to break down Hyderabad's resolute defence. But fails again, with Kamaljit Singh getting hold of the ball after leaving his line. Good outing for Hyderabad goalie so far.

79' - Hardworking Lallianzuala Chhangte up against three Hyderabad defenders. And win another corner after losing the ball momentarily. And change for Hyderabad. Rohit Kumar off, Shankar Sampingraj  in.

77' - Marcelo Pereira goes with his left foot. A dangerous-looking volley from just outside the box, and it gets blocked. Tense moment for the hosts.

76' - Gevrmanpreet Singh heavily involved in Chennaiyin's latest move. They win a throw-in in the final third.  But nothing coming off it.

74' - Rafael Lopez Gomez defends well to deny yet another Chennaying attack. Hyderabad defenders are brilliant today. They are absorbing everything.

71' - Lallianzuala Chhangte and Rohit Kumar down. Chhangte gets a heavy challenge from Marko Stankovic. Free kick to Chennaiyin, but no card.

70' - A long throw from Tondonba Ngasepam, forcing Hyderabad to some desperate defending. On the break, Hyderabad get the ball as far the centre.

66' - Player down. And breather for others. Tondonba Ngasepam is getting medical attention.  L Ajit Metei, the referee, initially decided to continue the play, but finally, allowed physios to come in.

64' - This is becoming an end to end affair. Marcelo Pereira, from a free run, goes for the far post and misses it. But Robin Singh's there for the tap in. Just misses the ball.

63' - Marcelo Pereira releases a teasing ball inside the Chennaiyin box but Rafael Crivellaro heads clear the danger. On the counter, Chennaiyin hit the woodwork again. Great strike from Eli Sabia.

60' - Bobo gets a booking for his high boot on Tondonba Ngasepam.

59' - Then, a brilliant save from Kamaljit to deny Chennaiyin. Rafael Crivellaro, that's a good chance.

58' - Selfish play from Rafael Crivellaro. On the counter, Chennaiyin commit men in front. Thoi finds Crivellaro inside the box, and the later goes for the glory instead of setting up.

57' - Smart play from Robin Singh, to win a throw-in. Long one and Chennaiyin are forced to do some desperate defending. Bobo releases a very good through ball and Marcelo Pereira is denied by a brilliant Vishal Kaith. Corner.

54' - And Chennaiyin continue to press hard. Thoi Khangebam lobs one for Lucian Goian and the skipper misses te target, over the bar.

53' - Robin Singh showing a calming presence in the centre. Then, Gurtej Singh manhandles Lallianzuala Chhangte. Huge respect for the Mizo boy for not reacting.

50' - Then another very good save from Kamaljit Singh.  Fingertip save to deny Thoi Khangebam and the ball hits the far upright and corner from Chennaiyin.

49' - Lallianzuala Chhangte beats Gurtej Singh on the flanks, and win a corner. Anirudh Thapa on the ball from the delivery and tries to set up Chhangte, but good work from  Kamaljit Singh.

47' - First booking of the match. Yellow card for Anirudh Thapa. A soft one. Mohammed Yasir making the most out of it and the referee is fooled, once again.

46' - And Chennaiyin get the first free-kick. Very late tackle from Rohit Kumar, to Rohit Kumar.

8:33 PM IST: Players are back for the second half.

8:23 PM IST: Chennaiyin FC dominated the first-half but the two-time winners continue to wait for their first goal of the season. Chances galore for them, majority of those to Lallianzuala Chhangte. But Hyderabad FC did well to contain the danger and they were in fact growing into the contest with a couple of chances, including a very very easy one for Robin Singh. And what he did. Wasted, as usual.

45+1' - Marcelo Pereira is caught off-side. Very tight. Then, a free-kick for Chennaiyin at the opposite end. Rafael Crivellaro delivers, and clearance. That's all from the first half.

45' - Then, the worst miss of the match so far. Robin Singh hits the side netting from a very good side. One minute added on.

43' - Marko Stankovic, Robin Singh and Bobo in a good play, but Lucian Goian wins the tussle just outside the box and Tondonba Ngasepam gets robbed of a brilliant chance, from his feet, just outside the Hyderabad goalmouth.

41'  - On the counter, Chennaiyin win another corner. Rafael Lopez Gomez stands all and clears with a convincing header.

40' -Hyderabad defender Gurtej Singh lucky to win the ball from Lallianzuala Chhangte, then a move of some intention. Corner for Hyderabad.  From the following play, Marcelo Pereira gets on one on one with Vishal Kaith, and the Chennaiyin goalie beats him. A sliding clearance outside the box. Dangerous.

38' - A mazy run from Marcelo Pereira, then sets up Bobo. The final attempt from Bobo fails to hit the target. But something is coming from Hyderabad.

37' - Goal-kick for Hyderabad, and they look happy employing the long-ball. Chennaiyin captain Lucian Goian wins a header but the ball lands on the path of Bobo, who takes a long ranger. Poor effort.

36' - Rafael Crivellaro on the ball, and lots of Chennaiyin players inside the Hyderabad box. Another release and Lallianzuala Chhangte is off-side.

34' - At the opposite end, Mohammed Yasir gets on with the business. But he's alone. Hyderabad are not committing enough men forward to test Chennaiyin defence.

32' - From a quick counter, Arinudh Thapa finds Lallianzuala Chhangte in the final third, then Thapa finds himself in the midst of the action. His attempt from a close range is blocked on the goal-line by Matthew Kilgallon. Mighty chance.

30' - Thoi Khangebam on, and sends in a cross from the right flank. But clearance for Hyderabad.

29' - Marcelo Pereira goes with for the far top-corner. Just misses.

25' - Big miss! Another chance. This time, a lot easier. Corner, and an unmarked Lallianzuala Chhangte fails to hit the target with his header.

23' - Lallianzuala Chhangte, what a day, he's having. Good chances coming his way, but failing to convert. After yet another move, the Mizo youngster gets involved in a goal-mouth melee. Edwin Vanspaul, from the rebound, goes for the goal with his left foot, Good save from Kamaljit Singh.

21' - A very good move from Hyderabad with Nikhil Poojary delivering one from the right flank. But Robin Singh, as usual, continues to find his best.

19' - Rafael Crivellaro with another brilliant delivery for Lallianzuala Chhangte, then another chance going to waste. Clearance misses the far post by a whisker for a corner.

16' - Lallianzuala Chhangte is furious. Is brought down inside the box, or he thought so. Yes, it was clear case of pulling the shirt. That's a penalty. Corner. And nothing from it. In the build up, Rafael Crivellaro was brilliant.

15' - Another chance for Lallianzuala Chhangte, and another clearance from Rafael Lopez Gomez.

14' - Free-kick for Chennaiyin after a Rohit Kumar challenge on Anirudh Thapa. But the hosts just about manage to reach the goalmouth from the set-piece. Poor piece. Then, again, Hyderabad defence is not that great. Allowed the hosts to launch another attack.

12' - Chennaiyin are having the majority of possession. Hyderabad frontman Marcelo Pereira is caught off-side. Then, from the following play, Anirudh Thapa sends in a teasing cross.

6' - Anirudh Thapa does well to keep the ball in play near the centre-line. And another good move, but good mouth clearance.

4' - Bobo showing his physical presence in the midfield, and win a free-kick for Hyderabad.

2' - Good start from the hosts, making early inroads into Hyderabad half.

7:12 PM IST: Chennaiyin have made three changes to the side that lost to Bengaluru FC 0-3. Masih Saighani, Lallianzuala Chhangte and Thoi Khangebam are in for Dhanpal Ganesh, Rahim Ali and Andre Schembri. Three changes for Hyderabad too, that lost NorthEast United FC 0-1. Rafael Lopez, Bobo and Robin Singh in for injured Gomes, Gani Abdul Nigam and Abhishek Halder respectively.

Chennaiyin are the only team who are yet to score this season, but Hyderabad have conceded the most goals this season. Intriguing.

Both the sides have -7 goal difference. Hyderabad have conceded 10 while scoring two, but its 0-7 for Chennaiyin so far.

Chennaiyin have won just one match at home since last season.

6:45 PM IST: Here are the starting XIs and subs

Chennaiyin are hardly playing like champions. In four matches John Gregory's team hasn't scored a goal and with a draw to show, the Chennai team are at the bottom of the 10-team table. Hyderabad have three points from four matches.

It remains to be seen how Chennaiyin FC recover from the three-nil drubbing they received from Bengaluru FC.

"We dominated in our home matches. We played well against Mumbai and ATK. So, I was relaxed going into the Bengaluru FC game, but the performance left me shell-shocked. Particularly since it was against our rivals. We gave our fans nothing to cheer about," said Gregory.

Hyderabad coach Phil Brown will be happy to see his main players recover from injury. Except for Adil Khan, who picked up a knock in India's 2022 FIFA World Cup qualifier against Oman, the other main players are available for selection. Brown should have his best team on the pitch tonight.

"Chennaiyin won the title two years ago and now he's (Gregory) like a caged animal, a wounded animal. He's not getting the reward for hard work. They are losing games. That's the hard part of coaching, that's the hard part of management, to get answers. He has got the same problems like me, picking the right combination of Indian and foreign players," said Brown.