India's chase started off to a nervy start, but Dhoni and Jadhav settled the issue with a brilliant unbeaten partnership 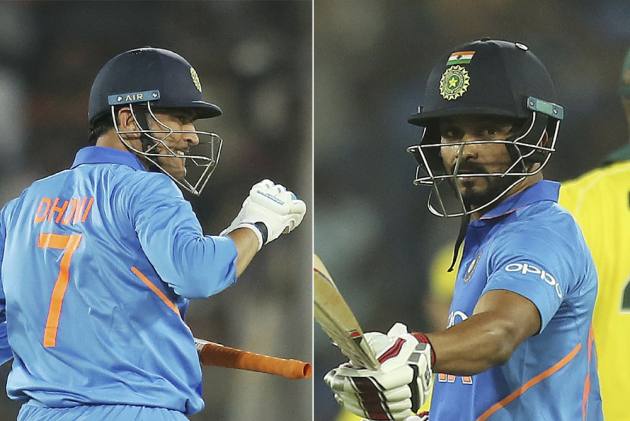 India had restricted Australia to a modest 236 for seven after the visitors opted to bat. The hosts then returned to overhaul the target with 10 balls to spare, scoring 240/4 in 48.2 overs.

When And Where To Watch 1st ODI?

The second match will be played at Vidarbha Cricket Association Stadium, Nagpur on March 5.

MS Dhoni hit the winning runs, a four, with 10 balls to spare as India won the first ODI match by six wickets.

After 30 overs, India were 125/4, still needing another 112 runs.  Ambati Rayudu (13 off 19) was the last Indian batsman to get out, Zampa had him caught behind. MS Dhoni and  Kedar Jadhav have added 26 runs in 39 balls for the fifth wicket. For the Aussies, Nathan Coulter-Nile and Adam Zampa have taken two wickets each.

Virat Kohli departed after making 44 off 45 balls, trapped in front by Adam Zampa. FoW - 80/2 (16.6 over). But before that, the skipper had added 76 runs with his deputy Rohit Sharma as India recovered from the early blow of Shikhar Dhawan wicket. Ambati Rayudu was the new man, and India were 82/2 after 18 overs. Still need 155 runs.

Rohit Sharma and Virat Kohli steadied the ship with a patient stand of 38 from 53 balls. India were 42/1 after 10 overs, still needing 195 more to win the match.

Nathan Coulter-Nile has sent Shikhar Dhawan (0 off 1) back, caught at point by Glenn Maxwell. FoW - 1-4 (1.1 over)Virat Kohli joined Rohit Sharma in the centre. India were 4/1 after two overs.

Australia managed to post a fighting total of 236/7 after Indian bowlers dominated the proceedings. Opener Usman Khawaja top scored with 50, while Glenn Maxwell contributed with 40 runs. Alex Carey and Nathan Coulter-Nile also chipped in with valuable 36 and 28 runs respectively.

Another wicket for Kuldeep Yadav. A beauty to beat Peter Handscomb (19 off 30) between bat and pad and MS Dhoni, behind, doing what does best. But Glenn Maxwell has been brilliant so far, 23 off 18. Australia were 133/4 after 30 overs. Ashton Turner is the new batsman.

Usman Khawaja (39 off 52) and Marcus Stoinis (28 off 35)have added 71 runs for the second wicket to counter India's charge. Virat Kohli have utilised as many as six bowlers. Australia 71/1 after 15 overs.

Another maiden over from Mohammed Shami, his second in three overs today. Earlier, Jasprit Bumrah provided India just the perfect start by removing Australia captain Aaron Finch (0 off 3), caught behind. FoW-0/1 (1.3 over)

India lost the toss again, third in succession against the Aussies. And the Aussie captain Aaron Finch opted to bat first in his 100th ODI. One change for the Aussies, wicketkeeper Alex Carey coming in for Jhye Richardson. For India, Ravindra Jadeja and Kuldeep Yadav come back.

The Indian cricket team will continue its experiments to figure out the final pieces of a jigsaw puzzle called the 'World Cup squad' as they take on a five-match ODI series against Australia.

The team is slowly moving into the World Cup mode and even a 0-2 loss in the just-concluded T20 series won't see any shift in plans as far as skipper Virat Kohli and coach Ravi Shastri are concerned.

"Every team will look to fine-tune whatever they need to before the World Cup, and we'll keep doing that in the ODI series too, but we still want to win every match we play," skipper Kohli said after the Bengaluru T20 loss headlining his intention.

The Australian team, buoyed by the maiden T20 triumph over India, will be eager to continue the momentum it has gained.

There will be at least four Indian players for whom the series will be like a 'pre-test', a good score ensuring that they get 'admit cards' for the board exams.

The four players in question are KL Rahul, Rishabh Pant, Vijay Shankar and Siddarth Kaul, who are fighting for two available slots in that UK bound 15-member squad.

One man who will be keenly tracking the developments from the sidelines will be Dinesh Karthik, who still, many believe, has an outside chance of making it to the team.