It was almost 10 pm IST in Guwahati when the umpires decided the T20I clash between India and Sri Lanka would have to be abandoned due to wet pitch, and fans slammed BCCI 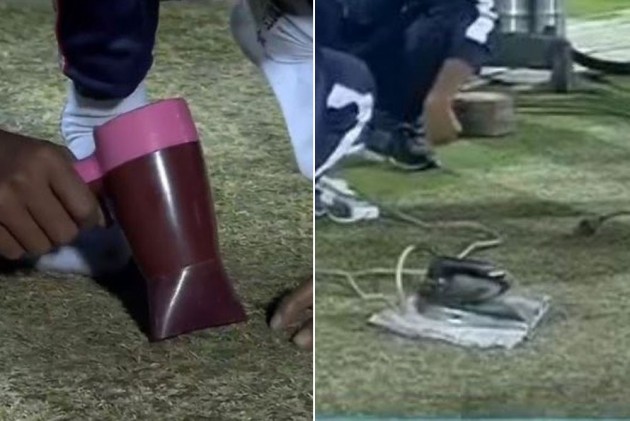 India's opening Twenty20 International against Sri Lanka was abandoned without a ball being bowled due to rain and a wet cricket pitch in Guwahati on Sunday.

As It Not Happened | Ignorant ACA | Cricket News

It started pouring 15 minutes before the scheduled time after India skipper won the toss and elected to bowl. The rain spell lasted less than an hour but the ground could not be prepared in time.

Meanwhile, spectators, in thousands, entertained themselves with a mass singalong while waiting for news of pitch inspections, before a final decision was announced shortly before 10 pm local time.

As the news of 'no match' arrived, celebrated cricket commentator Harsha Bhogle took to Twitter and wrote: "Hopefully this won't happen again."

Fans, reacting to his post, flooded the social media platform with angry reactions, with a common narrative -- the Board of Control for Cricket in India (BCCI), the richest cricket board in the world -- losing the game to rain. Some even compensation for wasting their time.

International match in Guwahati Assam has been abandoned.

It's such a shame, BCCI is richest board and we are using this Iron In the name of Drainage facility.

We all know this is a plan of modi shah to ruin Assam.

Spectators should sue BCCI for waste of time.

State association get million's of dollars from bcci every year to spend as budget . All these corrupt officials to do is waste the money to party and travel. Why can't there be hover covers like used in England to cover the pitch.

A international game abandoned because there were holes in the cover. Some things still remind us of the third world country tag. Shame.

india should not just have 5 permanent test centres, but the same has to be applicable for the limited over format as well...hair dryer and steam iron used to dry the pitch??it's shameful that @BCCI despite being the richest board lacks basic infrastructure to host a game #INDvSL

What about the fan experience? These people in Guwahati probably wanted to forget everything that’s been going on there and have a good time. Don’t take fans for granted @icc @BCCI @SGanguly99 we expect better things with Mr. Ganguly at the helm.

Jasprit Bumrah was set to return to action for India after recovering from a back injury, but his first appearance since September will have to wait.

Virat Kohli won the toss and chose to bowl, yet early evening rain meant there was no play possible, to the disappointment of a large crowd at the Barsapara Cricket Stadium.

The second game in the three-match series is scheduled for Tuesday at the Holkar Stadium in Indore.