IND Vs PAK: It All Changed After Sourav Ganguly, Never Thought India Could Defeat Pakistan Till He Became Captain - Shoaib Akhtar

Until Sourav Ganguly donned the skipper's hat it was thought that India could never regularly defeat Pakistan in matches, said former Pakistan bowler Shoaib Akhtar as the ex-India captain is all set to head the Board of Control for Cricket in India (BCCI) 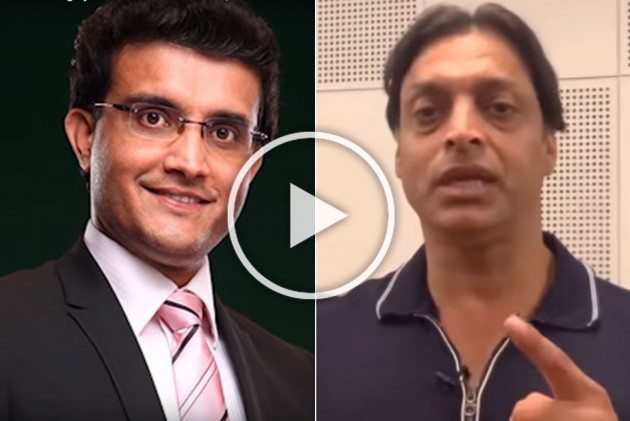 Former fast bowler Shoaib Akhtar said he never felt India can beat Pakistan before Sourav Ganguly became the captain and attributed the "transformation of Indian cricket" to the BCCI president-elect.

"I have spent a lot of time with Sourav Ganguly on the field and off the field. He was my captain at Kolkata Knight Riders. He is the person who transformed Indian cricket. He changed the mentality of the Indian team. Before he became captain, say in 1997 or 1998, I never felt India had the mentality to beat Pakistan," Akhtar said.

Pakistan used to dominate India in the field, except for the ICC tournaments. But the new crop of Indian players have turned the table on their arch-rivals, dominating the rivalry like never before. And Ganguly was the catalyst, who not only showed aggressive captaincy but also groomed future stars like Harbhajan Singh, Virender Sehwag, Zaheer Khan, Yuvraj Singh, etc.

"He had an eye to pick talent. He brought in players like Harbhajan, Sehwag, Zaheer, Yuvraj. Finally, I saw a different India. They had a team which can beat Pakistan. They won the series against Pakistan in Pakistan in 2004, that was a big series," the former tearaway pacer said in a video on his Youtube channel.

Ganguly was the captain of the Indian team for five years from 2000 to 2005, and he remained the most successful skipper of the country till Mahendra Singh Dhoni and then Virat Kohli surpassed him.

"Ganguly is a great leader, he is an honest person when it comes to picking talent. He has a brilliant cricketing knowledge. He raised the Indian team from a pedestal to a high level."

The 44-year-old Akhtar, who took 247 wickets in 46 Tests between 1997 and 2007, also said that people have a wrong perception that Ganguly is afraid of facing his raw pace.

"I hit him on his body, ribs, that one in Mohali. He cannot play pull or hook shot from my bowling. That was a drawback of his batting. Wasim (Akram) bhai told me to hit him on his rib. But it was is a wrong perception. Why should he be afraid of me and still come out to face my bowling?

"Since he is going to become BCCI president, I hope he can make a difference in world cricket, save Test cricket, and reduce this playing cricket throughout the year, especially T20.

"These days the bowlers are at the receiving end, I want relaxation for fast bowlers, they should be able to bowl bodyline."