The senior opener scored India's only half-century of the game with the home side spinners accounting for 19 wickets. 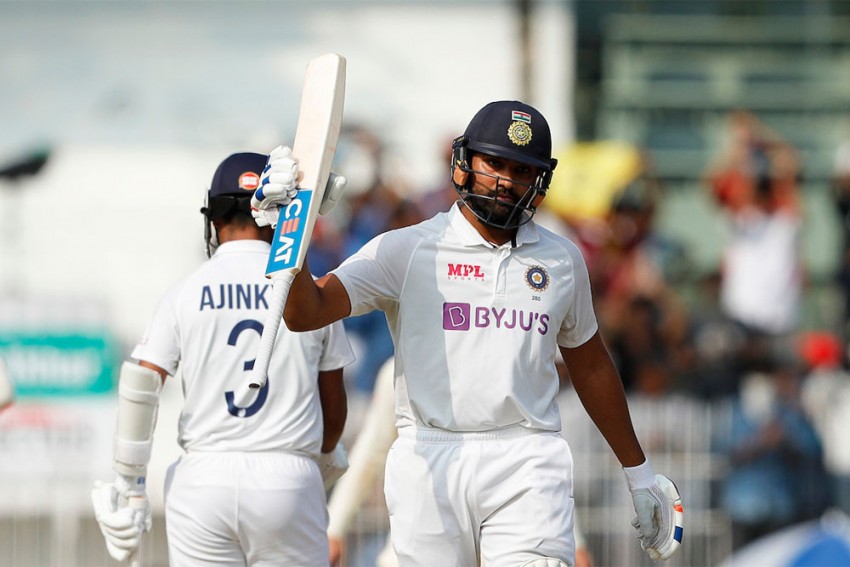 Rohit Sharma attributed his sublime first innings half-century to the positive intent that he displayed by not just trying to survive on an "interesting" but "normal" Indian wicket where England got thrashed by 10 wickets. Highlights | Scorecard | Gallery | News

The senior opener scored India's only half-century of the game with the home side spinners accounting for 19 wickets. England batsmen were deceived by Axar Patel's straighter deliveries that skidded straight instead of turning.

"When you are playing on a pitch like that, you need to have an intent and look to score runs as well. You cant just keep blocking. As you saw that odd ball might just turn and odd ball might just skid on to stumps, when you play for turn," Rohit said during the virtual conference after the end of the match.

Rohit felt that during his innings off 66, he was a step or two ahead of England bowlers.

"You just need to be slightly ahead at times and try and find ways to score runs. My intent was not just to survive but try and score runs as well, while respecting the good balls. That's all I tried to do.

"The pitch was an interesting one and odd ball was just coming in and some were taking turns. On a track like this, you need to have a clear mindset, which I think I did until I played that sweep shot."

He felt that Patel's strategy of attacking the stumps paid off well.

"Coming out from nowhere and performing is never easy. He was out injured, slightly down, came back and bowled very well in Chennai. He understands conditions well and how to vary the pace and what lines to bowl."

Coming wider off the crease was also another effective ploy used by Patel.

"He made the batter play most balls which is important as you never know which one is going to turn. It all goes to his skill-sets. He bowls little wider off the crease and slightly slinging action makes it very difficult for batsman to either leave or play," said Rohit.

For Rohit, the second Test track at the Chepauk was way more challenging.

"If you look at the Chennai second Test, it was turning helluva lot than what it did here, to be honest. But then a lot of batters got runs there in the second Test.

"Like I said in this Test match, we got to accept that we didn't bat well but in Chennai where the pitch had a lot more to offer, we batted well on that track. Ashwin got a hundred, Virat got 60-odd, so if you applied yourself, you could still score runs," said Rohit, who himself got 161 in that game.

He admitted tackling spinners in pink ball games is an area that would need some work as far as batsmen are concerned.

"We need to get back to drawing board and decide what we need to do when the ball is not spinning. Most batters got out to straight balls."

Asked about the difference between pink and red SG ball, Rohit felt that the former travelled faster.

"I think it (pink) came to the bat a little faster than normal red ball. I guess it has a lot to do with the conditions in the evening. The temperature goes down and plus dew factor. Whenever we play pink ball in India, it's going to behave like that, lot more grass on the pitch," he added.