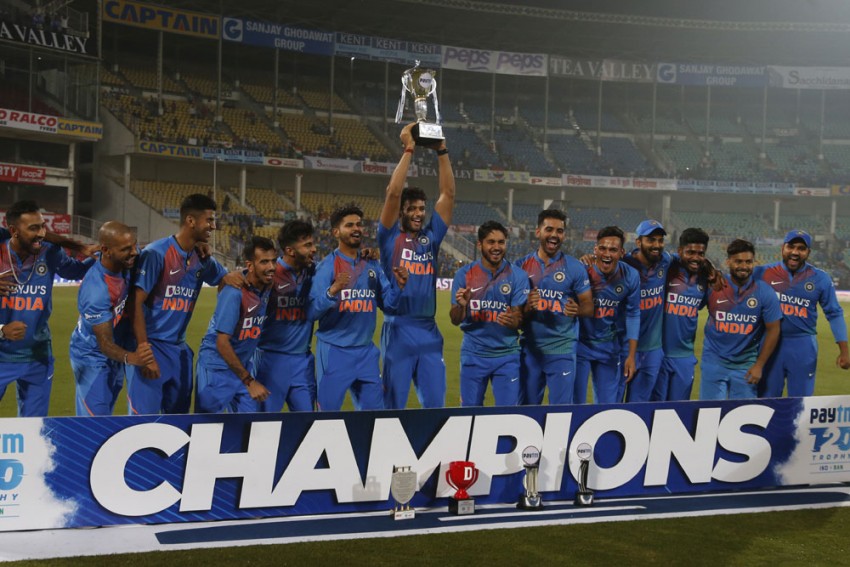 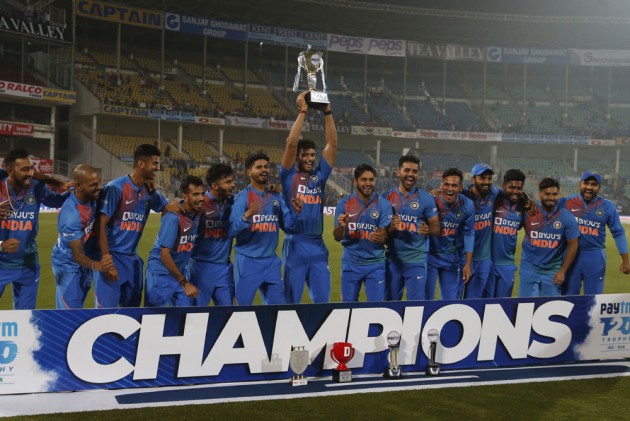 India captain Rohit Sharma credited his bowling unit for their stupendous show in the third and final T20 International against Bangladesh, saying the bowlers won the game and the series for the hosts at Nagpur on Sunday.

Pacer Deepak Chahar took a sensational six-wicket haul, including a hat-trick after entertaining half-centuries from Shreyas Iyer and K L Rahul, as India defeated a self-destructing Bangladesh by 30 runs in the third and final T20 International to win the series 2-1.

Pacers Deepak Chahar (6/7 in 3.2 overs), who registered the best figures in a T20 match on Sunday besides becoming the first Indian to take a hat-trick in the shortest format, and Shivam Dube (3/30) shared nine wickets amongst themselves to secure India's first T20 series win at home this season.

"It was the bowlers who won us the game. I know I have to say that being a batsman, but I know how tough it was given the dew. But this must be one of the best comebacks in this format for India," he said.

"It was easy for them (Bangladesh) at one stage, with 70 needed in eight overs. But the boys showed characters, took up the responsibility. Good to see young players putting their hands up. I just reminded the boys (while under pressure) that we're playing for India. Our body language was a little off in the first eight overs, but then we saw a different team India."

Rohit also lauded the batting unit for their efforts in the series.

"I want to credit the batsmen too. KL (Rahul), getting that knock was crucial, and Shreyas Iyer played an incredible knock. Until we get close to the World Cup, we have to find the right balance. Few guys are missing and will come back in, but keeping everything in mind, we've got quite a few games before narrowing in on a perfect 11," he said.

"We can try hell lot of things before getting on that flight to Australia. If we keep playing like the way we did today, it'll be a good headache to have for Virat (Kohli) and the selectors."

Bangladesh skipper Mahmudullah felt that they had their chances in the game but lost the plot in the middle overs.

"We had our chances. (Mohammad) Naim and (Mohammad) Mithun's partnership was incredible to see but we lost wickets in the middle," a dejected Mahmudullah said.

He, however, lauded the effort of his teammates.

"I think the effort that boys have put in has been very good to see. Naim is a very talented batsman, the way he bats and composes his innings was good to see. Hope he'll continue.

"Our seamers have been very good, execution was good and all of them bowled really well," Mahmudullah said.

Deepak Chahar, who won the nan of the match and man of the series awards for his sensation six-wicket haul on Sunday, including a hat-trick, said his hard work over the years finally paid off.

"I hadn't thought something like this would happen," said Chahar, who also registered the best figures in a T20 match besides becoming the first Indian to take a hat-trick in the shortest format.

"I've just been wanting to work hard, it's all god's help that I'm here. Today the plan was to bowl upfront with the new ball. I was told I'll be bowling the crucial overs. Happy the team management gave me that responsibility," he added.