With this win, TRAU, despite being level with Mohammedan Sporting, climbed to fifth with 13 points, courtesy of a better goal difference 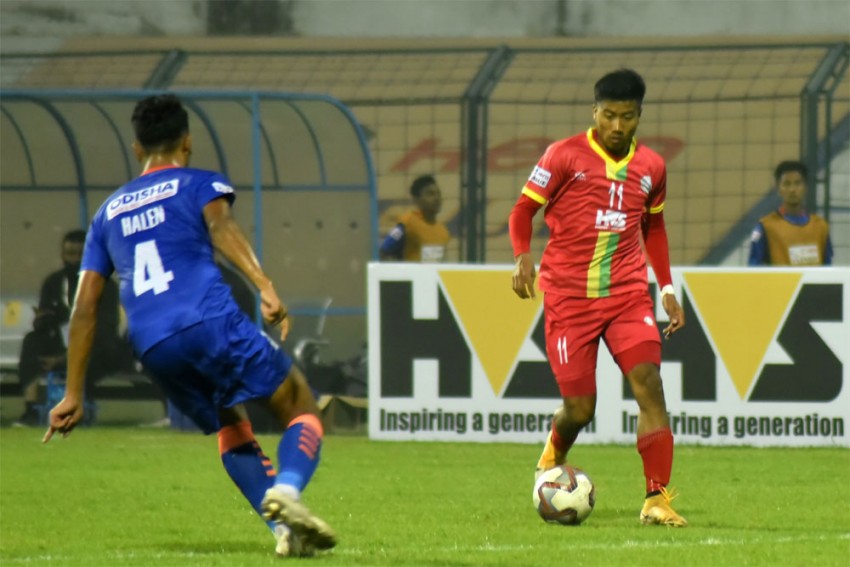 A Bidyashagar Singh brace, coupled with strikes by Mayosing, Komron Tursunov, and Chanso Horam led Nandakumar Singh’s men to a win after Harsh Patre’s magical free-kick had reduced the deficit for the Arrows.

With this win, TRAU, despite being level with Mohammedan, climbed to fifth with 13 points, courtesy of better goal difference, to set up an exciting last game-week showdown for all mid-table teams involved.

Needing a win to propel them higher up the table, TRAU showed urgency in the opening minutes of the match to find the back of the net.

Helder Lobato's header in the third minute itself came close to handing Nandakumar's team the lead but Ahaan Prakash's heroics between the sticks saved Lobato's effort.

TRAU followed their trend of scoring within the first 15 minutes of the match when Tursunov cleverly stepped past his marker and released a delicious through ball for Bidyashagar.

With ample time, Bidyashagar found the back of the net to hand TRAU the lead in the 14th minute.

In the 15th minute, Joseph Olaleye ran onto the left flank and sent inside a low cross for Mayosing who slotted home from close range as TRAU scored two goals in two minutes to take a two-goal advantage.

In the 29th minute, Ricky Shabong's majestic effort from the edge of the box came close to reducing the deficit for the young guns.

It took a moment of genius for the young Arrows to score. In the 42nd minute, Harsh Patre stood tall over a free-kick from the edge of the box and sent a curling shot into the top left corner to reduce the deficit for the Indian Arrows.

After the half-time scoreline read 2-1 in TRAU's favour, the Manipur-based club once again showed urgency in attack right from the start.

And it did reap dividends for them in the 49th minute. Tursunov once again combined with Bidyashagar and this time as well he assisted his strike partner, who slotted the ball comfortably into the net to extend TRAU's lead.

Regaining the two-goal cushion allowed TRAU to dominate possession comfortably once more. But Nandakumar's team did not hold back in trying to score more to better their goal difference.

In the 62nd minute, Tursunov passed unselfishly to Bidyashagar who shot wide of the goal. Had the Tajik import taken an effort itself, the Indian Arrows could have been in more trouble.

Tursunov capped his two assists with a goal in the 74th minute when a driven through pass from the midfield found him inside the box, and the Tajik import made little mistake from an acute angle as his low finesse shot found the back of the net to make the scoreline read 4-1 in TRAU's favour.

Harsh Patre could have reduced the deficit to two goals in the 79th minute, but his shot could only rattle the woodwork on its way out.

TRAU added more gloss to the scoreline through a Chanso Horam strike in the 84th minute.