In another match, Mohammedan SC came from two goals down to earn a 2-2 draw against TRAU FC at the Kalyani Municipal Stadium 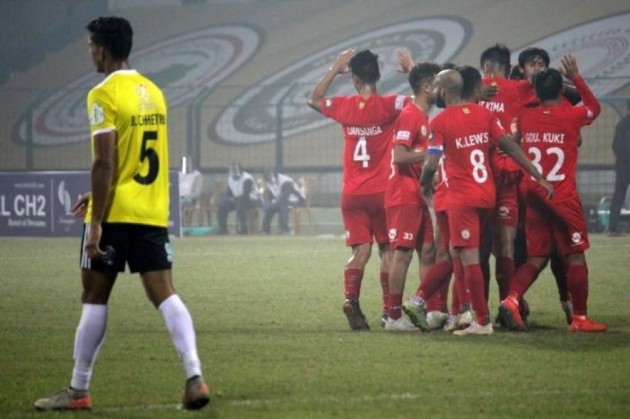 A wonder strike by Shaiborlang Kharpan from 35 yards was cancelled out by Mason Robertson in the 75th minute, as both the teams shared the spoils of battle in a cagey match where chances were rare.

Real Kashmir had a chance in the 10th minute when Danish Farooq pounced on a loose ball and ran towards the byline to whip in a cross. His delivery missed the Kashmir forwards as well as the opposition goalkeeper as the ball went out of play.

In the 12th minute, a header off a free-kick went wide of the Sudeva goal as Real Kashmir hunted for an early lead.

With Real Kashmir dominating possession in the final third, Sudeva looked to stop their forwards by committing bodies in defence. The Delhi outfit sat back and soaked pressure, clearing away loose balls and rarely found a sniff of the Kashmir goal.

Kean Lewis, who had been a bright spark for Sudeva in the last two matches, was well marked by the opposition defence, making life extremely difficult for the winger on the flank.

In the 19th minute, Sudeva had their first shot on target when Shaiborlang Kharpan’s first-time attempt brought out a decent save from the opposition custodian.

Dangerous in counter-attack, Sudeva tried to once again breach the citadel, this time from distance in the 21st minute. However, their attempts were still kept out by the goalkeeper.

Although Real Kashmir dominated possession, the David Robertson-coached team had little to show for their efforts. The half-time scoreline read 0-0 as both the teams went into the tunnel on level.

The complexion of the match did not change much in the second half. As both the teams played cautiously and rotated possession from wing to wing, chances were few and far.

It needed something special to change the complexion of the match and that something special came in the 62nd minute. Kharpan picked up the ball almost 35 yards out and released an inch-perfect shot which crashed into the right top corner of the net to hand Sudeva the lead.

In the 72nd minute, Kharpan tried the spectacular once again, this time his shot went wide as he tried a first-time volley off a cross from the left flank.

Real Kashmir, however, did not have to wait long for the equaliser. In the 75th minute, Sena Ralte found Robertson, who had to shoot from a tight angle, but the lanky defender made the most of it and fired his effort between the legs of the opposition custodian to bag a leveller for the Kashmir outfit.

Mohammedan SC came from two goals down to hold TRAU FC to a 2-2 draw at the Kalyani Municipal Stadium here on Tuesday.
Goals by Komron Tursunov in the second minute and Helder Lobato in first half stoppage time were cancelled out by headers from Nikhil Kadam and Hira Mondal in the 58th and 68th minutes respectively, as both the teams shared points at the end of the 90 minutes.

TRAU were given the chance to go ahead in the very first minute itself after Komron Tursunov's header went inches over the bar.

The Goan side dominated the match both in terms of possession and chances created and the Punjab FC defence was under constant threat.

In the fourth minute, Punjab FC were handed a golden opportunity when forward Chencho Gyeltshen burst forward and rounded the onrushing goalkeeper. But the Bhutanese forward’s strike was cleared from the goal-line by Suresh Meetei.

Four minutes later, Luka Majcen was put through to goal off a fine cross from the right flank. With only the opposition custodian to beat, Majcen shot over the bar and Punjab FC survived a scare.