A penalty by Megan Rapinoe and a strike from Rose Lavelle took the United States to a 2-0 victory over Netherlands in the final of the FIFA Women's World Cup 2019 in Lyon, France on Sunday. 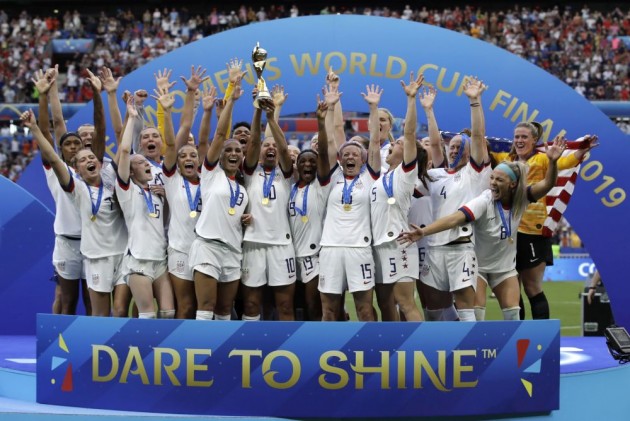 Reign FC forward Rapinoe plundered her sixth goal of the tournament to ensure Jill Ellis' side successfully defended their title at the expense of a Netherlands team that fought bravely to overcome their underdogs tag but ultimately came up short.

The goal, which came after a VAR review highlighted Stefanie van der Gragt's foul on Alex Morgan, drew Rapinoe level with Morgan and England's Ellen White in the goalscoring stakes, while Netherlands forward Lieke Martens cut a frustrated figure as the Dutch struggled to create chances.

Lavelle provided the best moment of an entertaining clash in Lyon when she carried the ball from the center circle to the edge of the box before producing a classy finish, the quality of which reflected everything crowds at this World Cup have come to expect from its dominant team.

The European champions certainly played their part but, perhaps fittingly after a tournament marked by the use of technology, the contest hinged on a challenge that might have gone unnoticed without it.

Sherida Spitse was booked for a late sliding challenge on Lavelle in a cagey opening spell that saw the United States fail to score inside the opening 12 minutes of a game for the first time at this year's tournament.

The USA struggled to break down a compact Dutch defense until Julie Ertz thundered a volley towards goal after 28 minutes but Sari van Veenendaal was equal to it, parrying the ball away from danger.

Van der Gragt's superb interception prevented Morgan from latching onto a long ball forward and Van Veenendaal then made two excellent saves to deny the forward before Netherlands ended a battling first-half performance with a dangerous spell of pressure.

Netherlands continued to frustrate USA until Van der Gragt's high challenge on Morgan prompted a VAR review and, after a penalty was correctly awarded, Rapinoe side-footed the ensuing spot-kick low to Van Veenendaal's left and into the net.

Vivianne Miedema tore through the USA defense with a mazy dribble but could not get her shot away and moments later Lavelle provided a finishing lesson, making space for herself on the edge of Netherlands' box before stroking a left-footed shot into the corner of the net.

Van Veenendaal made an excellent save to deny Crystal Dunn when the left-back burst clear but there was no time for her teammates to mount a comeback as the world champions deservedly secured back-to-back titles.