EXCLUSIVE | Virender Sehwag Could Bring Any Attack To Its Knees: John Wright 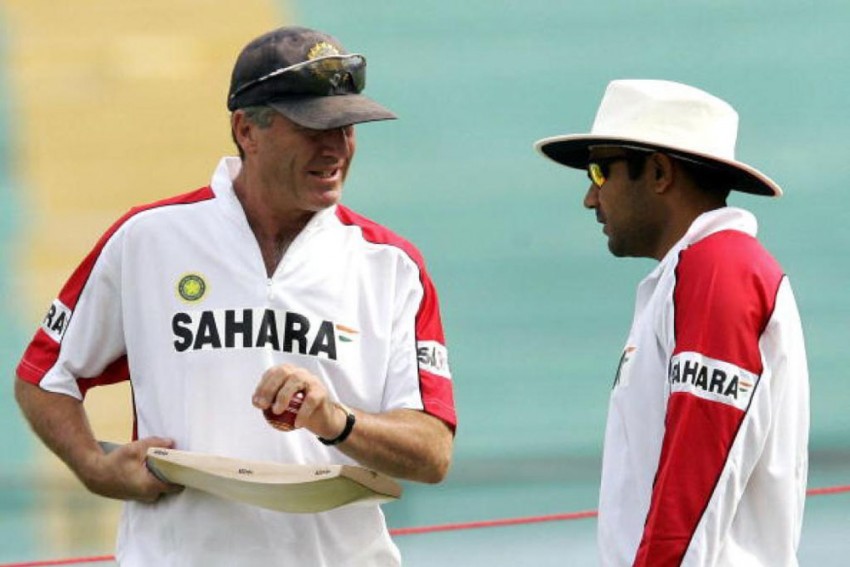 On the occasion of the 16th anniversary of swashbuckling Virender Sehwag’s – and also India’s -- maiden Test triple century on Sunday, March 29, then India team coach John Wright just can’t seem to stop praising the opening batsman. For Wright, Sehwag was “very special, a truly great player who could bring any attack to its knees”.

Along with Wright in the elated Indian dressing was another staunch Sehwag fan – Prabhakar, a Deputy Commissioner of Police with Delhi Police – who was accompanying the team as a security liaison officer. Prabhakar was so moved by the occasion that he has preserved his mauve-colored shirt he wore that day and also a stump used in the third and final Test of the series in Rawalpindi, where India won and clinched the first-ever Test series on Pakistani soil in 50 years.

“It was a superb innings [309 runs, 375 balls, 531 minutes, 39x4s, 6x6s] in every respect, but particularly because it was such an important Test match for us as a team. Our first Test match against Pakistan for many years [first since 1989],” Wright, who was a big fan of Sehwag, told Outlook in an exclusive chat from New Zealand on Sunday.

India were touring Pakistan after many years and playing their first Test series in almost 15 years. Sehwag was 25 years old at the time and playing his first Test match on Pakistani soil – and 21st of his career. The pressure on the India was immense as no team had won a Test series in Pakistan in five attempts in 50 years, starting 1954-55. And, not to forget, Pakistan had a potent bowling attack in speedsters Shoaib Akhtar, Mohammad Sami, Shabbir Ahmed, and Abdul Razzaq, and world-class off-spinner Saqlain Mushtaq.

During his belligerent innings, Sehwag not only improved upon his own highest score of 195, but also bettered India’s top Test innings of 281, scored by VVS Laxman in the historic Kolkata Test against Australia in 2001. Laxman was happy to applaud Sehwag’s effort from the Multan dressing room. 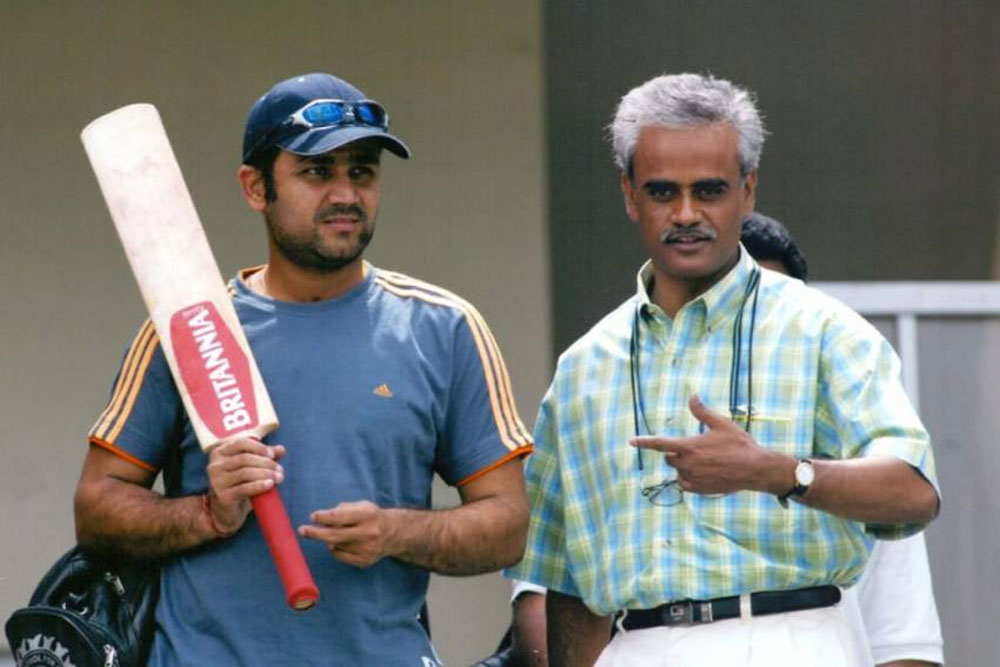 Virender Sehwag with Prabhakar, a Deputy Commissioner of Police with Delhi Police who accompanied the Indian team as security liaison officer on the 2004 tour of Pakistan.

“His innings gave us so much confidence and relaxed us all in the dressing room and he just kept going,” Wright, a former New Zealand captain, disclosed. India captain Rahul Dravid – he led the team after original captain Sourav Ganguly was ruled out due to indisposition – won the toss and opted to bat. Sehwag and his Delhi teammate and co-opener Aakash Chopra (42 runs) gave India a solid start of 160. But Sami dismissed Dravid (6) cheaply, with the addition of only 13 for the second wicket. This brought Sehwag and Sachin Tendulkar (194) together and they added 336 for the third wicket, with the former remaining unbeaten on 228 and Tendulkar on 60 at the end of the first day.

Sehwag’s innings, along with Tendulkar’s, set the tone for India’s eventual innings and 52-run win, on a pitch prepared a family member of Pakistan’s first Test captain, Abdul Hafeez Kardar. India lost the second Test by nine wickets in Lahore, but came back strongly to clinch the third one in Rawalpindi to make history.

Soon after completing his triple century on the second day, Sehwag got out to Sami, edging to Taufeeq Umar in the lone slip. Interestingly, Dravid declared the Indian innings at 675 for five wickets, when Tendulkar was batting at 194. This decision created some ripples, but later both Dravid and Tendulkar “sorted out” the issue amicably. When Pakistan batted, left-arm pacer Irfan Pathan captured four wickets with his banana swingers to help bundle the opposition out for 407, and forced them to follow on. In their second innings, Pakistan had no answer to leg-spinner Anil Kumble’s guile and he ended up with a superb six-wicket haul to complete Pakistan’s mauling, despite Mohammad Yousuf’s 112.

Sehwag’s batting style enamored Wright. “I loved Veru’s approach to batting. He was never intimidated by either his opponent or the occasion. To me, Veru was very special, a truly great player who could bring any attack to its knees. He destroyed bowlers,” gushed the New Zealander.

Wright also highlights Sehwag’s breath-taking 195 (233 balls, 312 minutes, 25x4s, 5x6s), scored against Australia in Melbourne, just three months before his Multan triple ton. “This innings, along with the 195 he scored at the MCG against Australia before tea on the first day at Melbourne, I will never forget,” says the coach who was with the team there.

And what did Wright say to Sehwag after his 309 in Multan? “I cannot remember what I said to him after his innings. I hope not too much, as words wouldn’t do justice to the quality of his batting,” he says in awe of the Sehwag’s explosive batsmanship.

Prabhakar, on the other hand, saw the celebrations both inside the Multan dressing room and in the Indian team bus that carried the players from the stadium to Holiday Inn hotel. The top cop proudly points out that the first shot the live telecast showed of the Indian dressing room, following Sehwag’s triple, includes him applauding the effort of the batsman from Najafgarh in Delhi.

“I was wearing a mauve coloured shirt that day, and I have preserved that shirt. After all, it was an historic occasion. When the team was on its way to the hotel at the end of the first day’s play, when Sehwag was unbeaten on 228, I distinctly remember I said to someone that there was a probability of him scoring India’s first triple century the next day. And it turned out to be that way,” Prabhakar, who retired from service last August, told Outlook.

“And, I also remember that it was business as usual for the Indian team even after it won the Multan Test, though all the players were happy. Only after they won the third Test in Rawalpind that it dawned on the players that they have scripted history – the first ever Test series win in Pakistan. And I have got a stump used in the Rawalpindi Test as a souvenir, including the mud attached with the stump,” said the man who accompanied the team in the last two matches of the five-ODI series and the entire three-Test series.