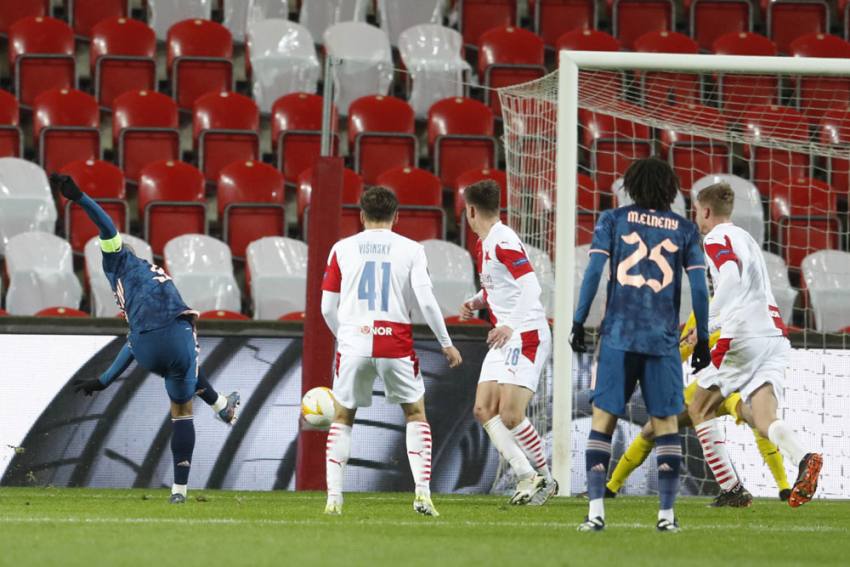 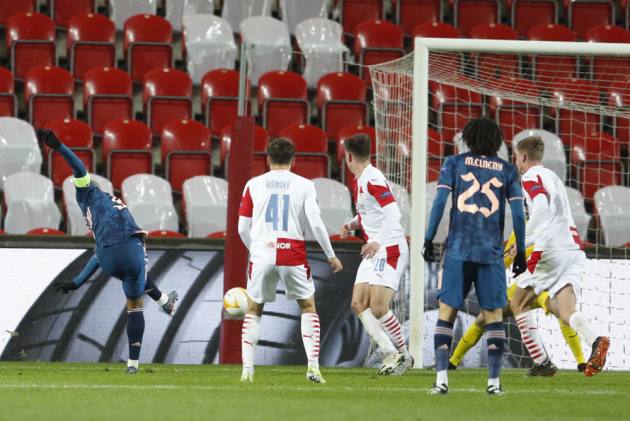 Arsenal turned on the style with three goals in six first-half minutes to beat Slavia Prague 4-0 and progress through 5-1 on aggregate, setting up a reunion with Unai Emery's Villarreal in the semi-finals. (More Football News)

A number of spurned opportunities came back to haunt Arsenal in last week's reverse fixture as Tomas Holes scored late on to cancel out Nicolas Pepe's opener in a 1-1 draw.

But the Gunners were at their efficient best in front of a sparse crowd at Sinobo Stadium on Thursday, completely wiping out Slavia's away-goals advantage through strikes from Pepe, Alexandre Lacazette and Bukayo Saka inside 24 minutes.

Slavia had gone 23 games without defeat in all competitions and last lost at home in November 2019, but there was no sign of a comeback as Lacazette added a late fourth for Arsenal to seal an emphatic victory.

Emile Smith Rowe thought he had given Arsenal the lead on the night early on when tapping in after Saka's curler was pushed onto the post by Ondrej Kolar and fell into his path.

The goal was ruled out for offside following a lengthy VAR check, but Smith Rowe played in Pepe a minute later and the winger coolly slotted past Kolar for the visitors' opener.

A second away goal followed from the penalty spot three minutes later, Lacazette sending the keeper the wrong way after Jakub Hromada brought down the lively Saka.

Arsenal showed no signs of slowing as Saka carried the ball inside from the right and drilled a left-footed finish into the bottom-right corner from 18 yards, with Kolar rooted to the spot.

That left Slavia requiring four goals to advance but the Czech champions, who knocked out Leicester City and Rangers en route to this stage, struggled to muster a response.

Lacazette had a penalty appeal rejected when going down in the box but the Frenchman had the last laugh when finding the near post to round off a counter 13 minutes from time, sending Arsenal through with minimal fuss.

What does it mean? Brilliant Gunners keep season alive

Arsenal are relying on the Europa League to salvage their season and, on the basis of this performance, there is no reason why they cannot lift the trophy next month.

With their first-half blitz, the Gunners have now scored three or more goals in four successive away games in all competitions for the first time since December 1932.

A reunion with ex-boss Emery awaits following Villarreal's 3-1 aggregate win over Dinamo Zagreb, while Roma face Manchester United in the other semi-final.

Who will contest the final in Gdansk? #UEL pic.twitter.com/WxoEC80WAj

In complete contrast to last week in London, the first half of this second leg was an attacking masterclass from the Gunners, with three of their four forward players on the scoresheet and the other - Smith Rowe - having a goal ruled out.

Saka in particular caught the eye and with his goal he has now netted four times for Arsenal in European competition - the joint-most of any teenager for the club, alongside Charlie George and Ray Kennedy.

Holes in the defence

Centre-back Holes was the hero for Slavia seven days ago with his late equaliser, but he and his team-mates were torn apart time and again by Arsenal on Thursday.

He lost possession 14 times - only striker Peter Olayinka gave it away more often for the hosts - and could not cope with the trickery of Pepe, Smith Rowe and Saka in and around the box.

- Arsenal have reached the semi-finals of European competition for the 10th time (including Fairs Cup), with the Gunners getting to the last four in three of their four Europa League campaigns.

- Slavia suffered their first home defeat in their last seven European games (W3 D3), conceding more goals in this game (four) than in the previous six on home soil (three).

- Arteta's side kept a clean sheet in a European game for the first time in eight games, since a 3-0 away win over Molde in the Europa League in November 2020.

- Pepe has been directly involved in nine goals in his 10 starts for Arsenal in the Europa League (four goals, five assists).

Arsenal return to Premier League action with a home match against Fulham on Sunday, the same day that Slavia travel to Slovan Liberec in the Czech First League.