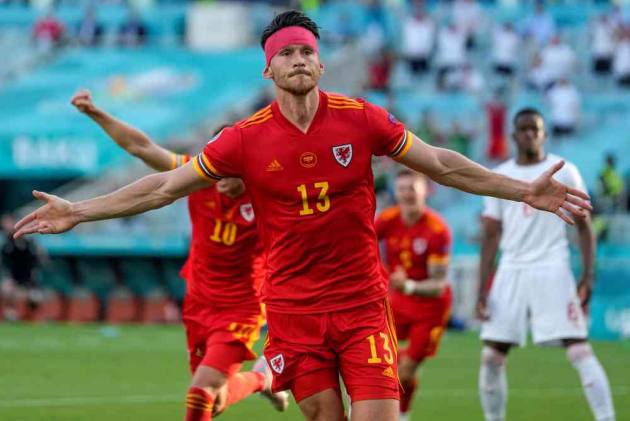 With his head wrapped in bandages the same colour as his red shirt, Keiffer Moore nodded in an equalizer to give Wales a 1-1 draw with Switzerland on Saturday at the European Championship. (More Football News)

Moore headed in a cross from Joe Morrell in the 74th minute to give the Welsh a 1-1 draw with Switzerland on Saturday at the European Championship. Breel Embolo had put the Swiss in the lead with his own header about 25 minutes earlier.

For Moore, it was the biggest step so far in a long journey to soccer's elite after starting in the non-league system in southwest England.

Towering over most opponents at 1.96 meters (6-foot-5), Moore spent time as a lifeguard early in his career when he was a part-time player. But he worked his way up to the second division and made his debut for Wales at the age of 27 in 2019.

"It's great personally. I think it's a good start for us. We would have liked a win but to take a draw from the first game to put us in a good position is everything for us," Moore told the BBC.

"Obviously this is a big occasion and I've loved every second of it."

Moore nearly gave Wales a lead with a looping header which Switzerland goalkeeper Yann Sommer stretched to push over the bar, but he was hurt in a clash on the resulting corner.

Moore left the field bleeding and returned in bandages, but was largely cut out of the game as Wales defended deeper in the first half before his equalizer.

"He's not just a presence up top, he's more than that. His linkup play is good, he's got a good touch for a big lad and he's a willing runner," Wales interim coach Robert Page said.

"When you've got all three of those attributes as a center forward, it's a good recipe."

Switzerland dominated possession but wasted numerous chances before Embolo scored the opening goal in the 49th minute. First he won a corner when his shot was pushed wide after a solo run, then rose above his marker to head in a cross from Xherdan Shaqiri.

"It was a good ball from Shaq. I think it was a good game from the team. At the end we were not strong enough to get the three points. Yes, we deserved more, I think, today," Embolo said.

The Swiss pushed for a winning goal after Moore's header and thought they had one when Mario Gavranovic put the ball in the net, but it was ruled offside on video review as the Welsh fans sang the praises of VAR. Wales goalkeeper Danny Ward made a fine save to tip another Embolo header over the bar shortly after.

Wales, which reached the semifinals at Euro 2016, has avoided defeat in seven of nine games under interim coach Robert Page. He is in charge for Euro 2020 while Ryan Giggs awaits trial in January on charges of assaulting two women and exerting controlling and coercive behaviour.

UEFA said only 8,782 spectators were at the match, even though authorities in Azerbaijan allow up to 31,000 for this year's tournament.

Italy leads Group A with three points after its 3-0 win over Turkey on Friday. Wales and Switzerland have one point each and will both still face Turkey in Baku, where the Turks are likely to have a large number of travelling fans and strong local support.

"We have to use this a springboard now to the next game."

Switzerland is trying to improve its record in major tournaments after losing in the round of 16 at its last three appearances at the World Cup and European Championships.