The match between Denmark and Finland was suspended due to the medical emergency. Eriksen was 'stabilised' in hospital 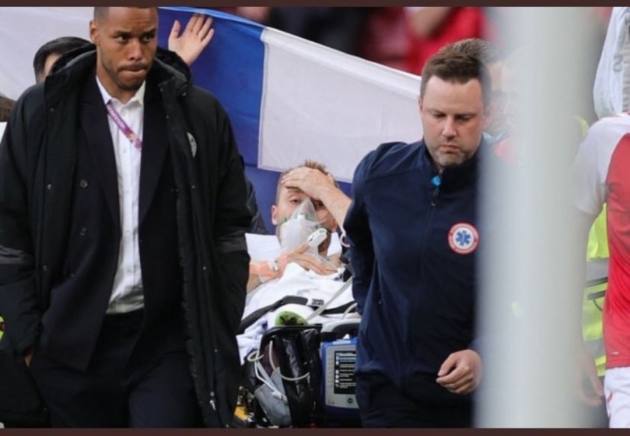 The European Championship game between Denmark and Finland was suspended briefly on Saturday after Christian Eriksen needed urgent medical attention on the field near the end of the first half. (More Football News)

But after the news emerged that Eriksen is 'stable and awake', the players from both the sides decided to restart the match.

The game was halted in the 43rd minute with the score 0-0.

Eriksen was given treatment for about 10 minutes after collapsing on the field before being carried off on a stretcher.

The player was transferred to the hospital and was stabilised, UEFA said in a tweet on Christian Eriksen's condition.

UEFA then announced the game had been suspended 'due to a medical emergency.'

Following the medical emergency involving Denmark’s player Christian Eriksen, a crisis meeting has taken place with both teams and match officials and further information will be communicated at 19:45 CET.

The player has been transferred to the hospital and has been stabilised.

Eriksen had just played a short pass when he fell face-forward onto the ground. His teammates immediately gestured for help and medics rushed onto the field.

After a while with Eriksen stable, UEFA tweeted that "Following the request made by players of both teams, UEFA has agreed to restart the match between Denmark and Finland tonight."

Following the request made by players of both teams, UEFA has agreed to restart the match between Denmark and Finland tonight at 20:30 CET (TBC).

The last four minutes of the first half will be played, there will then be a 5-minute half-time break followed by the second half.

Eriksen was given chest compressions as his teammates stood around him in a shielding wall for privacy.

A stadium announcer asked fans to stay in their seats until further information could be provided.

The Finland players huddled by their bench and eventually walked off the field while Eriksen was still getting treatment.

Eriksen was eventually carried off to a loud ovation, with his teammates walking next to the stretcher.

Eriksen is one of Denmark's biggest stars and the incident brought an instant sense of shock to the Parken Stadium, where about 15,000 fans fell into hushed silence. Some supporters could be seen crying and hugging in the stands.