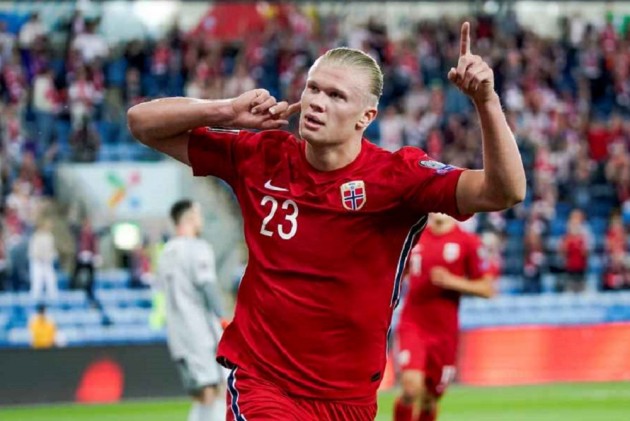 Haaland's 20th-minute strike on Wednesday was cancelled out by Netherlands midfielder Davy Klaassen in front of 7,000 fans at Oslo's Ullevaal Stadium. Substitute Denzel Dumfries came close to snatching a winner for the Netherlands with the last attempt of the match.

The qualifier was the first for the Netherlands since Van Gaal took over for his third stint as coach and marked the return of captain Virgil van Dijk, who was sidelined for months with a serious knee injury.

In Istanbul, Risto Radunovic scored an equalizer deep in second-half stoppage time as Montenegro recovered from a 2-0 deficit to draw 2-2 with Group G leader Turkey.

Cengiz Under and Yusuf Yazici put Turkey ahead before Adam Marusic and Radunovic salvaged a point for Montenegro.

Turkey remained on top of Group G after four matches, while the draw in Oslo left the Netherlands one point adrift in second, ahead of Montenegro and Norway on goal difference. Latvia beat Gibraltar 3-1 in the group's other match.

Van Gaal restored the team to the formation of four defenders, three midfielders and three forwards favored by his players. But the attacking setup left the Dutch vulnerable to Norway's fast breaks and the Netherlands forwards could not break down the stubborn Norwegian defense.

"You need creativity that we don't have at the moment," Van Gaal told Dutch broadcaster NOS.

Haaland forced a good save from Dutch debutant goalkeeper Justin Bijlow in the 15th minute and five minutes later the 21-year-old controlled a high ball, held off a Van Dijk challenge and poked the ball past Bijlow to give Norway the lead. It was the Borussia Dortmund striker's eighth goal in just his 13th international match.

"You can't do anything about it. That's the quality of Haaland," Van Gaal said.

The Netherlands pushed forward throughout the first half and was rewarded in the 36th minute when Klaassen bundled the ball into the net after a low cross by Georginio Wijnaldum.

Haaland came close to restoring the Norway lead in the 66th minute when he again beat the Dutch defense to run onto a through ball by Martin Odegaard but hit the post with a curling left-foot shot.

Substitute Donyell Malen also came close for the Netherlands in a disappointing second half, cleverly making room for himself on the edge of the penalty area before shooting just wide.

Van Gaal took over from Frank de Boer, who resigned after the Netherlands was eliminated from the European Championship by the Czech Republic. Klaassen's goal was the 100th by the Netherlands under Van Gaal's leadership.