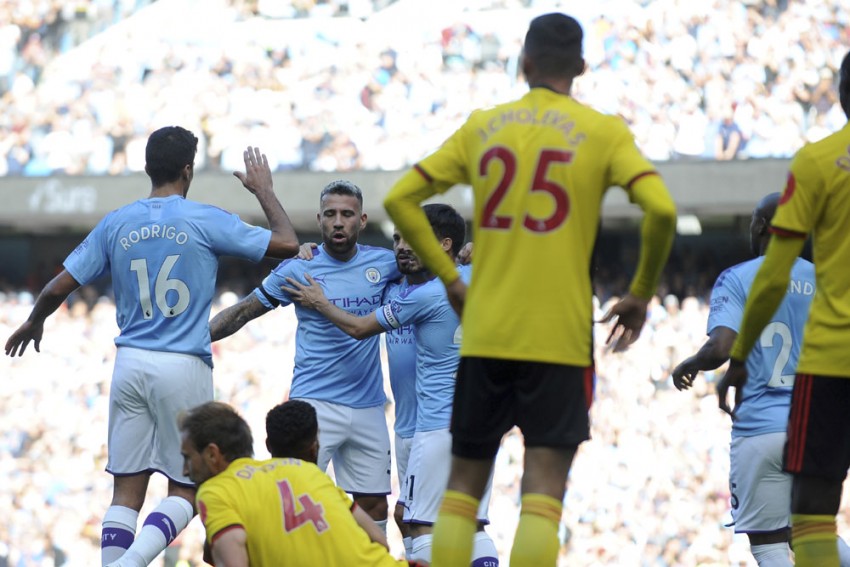 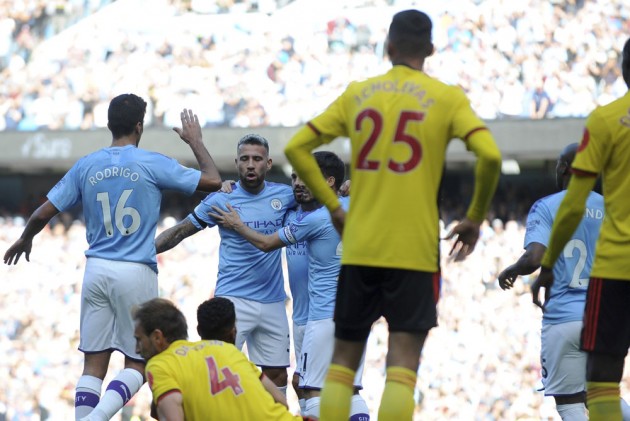 Manchester City returned to winning ways in the Premier League with a stunning 8-0 triumph over sorry Watford to record their biggest ever top-flight victory at the Etihad Stadium.

Pep Guardiola's side slipped to a shock defeat at Norwich City last weekend but responded in spectacular fashion against the league's bottom side, racing into a five-goal lead inside 18 minutes.

David Silva got them on their way after 52 seconds before a Sergio Aguero penalty and goals from Riyad Mahrez, Bernardo Silva and Nicolas Otamendi put the game out of the sight before the midway point of the first half.

Bernardo Silva grabbed the first top-flight hat-trick of his career with goals in the 48th and 60th minutes before Kevin De Bruyne added an eighth five minutes from time.

"Amazing" doesn't do it justice!

The result moves City two points behind Liverpool at the Premier League's summit – though the Reds have a game in hand - while Watford remain rooted to the foot of the table with just two points from their opening six games.

Their third came after just 12 minutes when Mahrez's free-kick from the edge of the area beat Foster courtesy of a significant deflection off Tom Cleverley.

Bernardo Silva added a fourth just three minutes later, stooping to head home a corner from eight yards, while Otamendi made it five in the 18th minute, turning home Aguero's low cross at the back post.

City's intensity dropped a little after that devastating opening, although Aguero came close to registering a hat-trick before the interval, the Argentina international twice denied by the post.

The hosts wasted little time making it six after the restart, Bernardo Silva slotting past a helpless Foster from 10 yards after collecting David Silva's pass.

Aguero twice came close to adding a seventh before Bernardo Silva brought up his hat-trick on the hour mark, prodding home De Bruyne's cross from close range at the back post.

Mahrez then saw a header cannon back off the crossbar before De Bruyne capped a superb individual display with a rising drive from 16 yards that gave a beleaguered Foster no chance.

What does it mean? Watford on the end of brutal backlash

Determined to return to winning ways after last weekend's surprise defeat to Norwich, poor Watford never stood a chance against Guardiola's men. A display of relentless efficiency moves them two points behind Liverpool, who travel to Chelsea on Sunday well aware that the reigning champions are ready to pounce should they slip up.

The 31-year-old has now scored in each of his six Premier League appearances this season as he brought up a century of league goals at home. His only disappointment will be that he failed to add more, twice hitting the upright in the first half.

100 - Sergio Aguero has scored his 100th Premier League goal at the Etihad - he is one of just three players in the competition's history to net 100+ goals at a single venue, alongside Thierry Henry at Highbury (114) and Wayne Rooney at Old Trafford (101). Milestone. pic.twitter.com/1CaVQqMNzd

He was hardly helped by his woeful defence, but the Watford goalkeeper provided little resistance to City. He brought down Mahrez for Aguero's penalty and scarcely produced a save in what was a game he will hope to forget quickly.

Both sides are in EFL Cup action on Tuesday, with City travelling to Preston North End and Watford hosting Swansea City. Guardiola's side then visit Everton in the Premier League on Saturday, while the Hornets take on Wolves at Molineux on the same day.