India wobbled after a bright start but KL Rahul, batting on 57, kept the visitors on course. India trail by 58 runs. Catch the highlights of ENG vs IND here 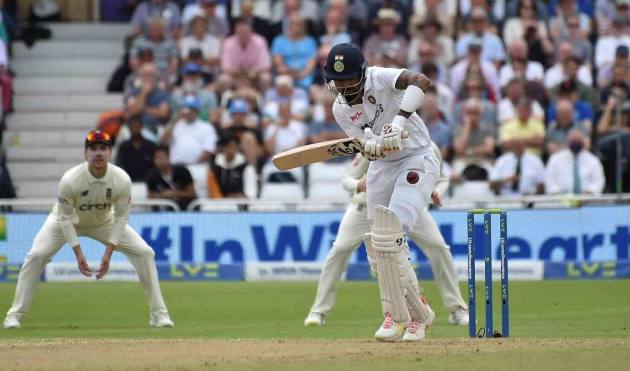 India were 125 for four in their first innings at stumps after rain effectively washed out the entire evening session on day two of the first Test against England in Trent Bridge on Thursday. Only 33.4 overs were possible in the day with the majority of them coming in the morning session. KL Rahul and Rishabh Pant were batting on 57 and 7 on either side of the rain break before play was called off. For England, James Anderson took two wickets, while Ollie Robinson picked one.  Veteran England pacer Anderson equalled Indian spin legend Anil Kumble’s tally of 619 Test wickets. Anderson, a right-arm pacer, achieved the feat during the second day of the first test here, after he removed India skipper Virat Kohli on a zero.Only former Sri Lankan spin great Muttiah Muralitharan with 800 Test scalps and former Australian leg-spinner Shane Warne with 708 wickets are now ahead of Jimmy Anderson, who is playing his 163rd Test, after making his debut way back in 2003. Brief Scores: England 1st innings: 183 in 65.4 overs (Joe Root 64, Jonny Bairstow 29; Jasprit Bumrah 4/46) Indian 1st innings: 125 for 4 in 46.4 overs (KL Rahul 57 not out, Rohit Sharma 36; James Anderson 2/15).Follow live cricket scores of England vs India here. (SCORECARD | OLYMPICS AUG 4 HIGHLIGHTS | DAY 2 REPORT)

10:22 PM IST: Thats stumps for the day. KL Rahul and Rohit Sharma are the only two bright spots for India on Day 2

8:50 PM IST: But rain has comeback again. Only one ball could be bowled as players rush back inside and ground staff rush with covers. Stay tuned for more updates

8:42 PM IST: Rains have stopped and covers are off. Hopefully we will see action in next 5-10 minutes;

7:54 PM IST: Tea has been taken as we still wait for weather to improve and rain to stop.

7:07 PM IST: Bad light has stopped play. India who were 97/1 at lunch collapsed and were 125/4 when the play was stopped. James Anderson accounted for Cheteshwar Pujara and Virat Kohli off successive balls, while Ajinkya Rahane ran himself out. KL Rahul was batting on 57, while Rishabh Pant was batting on seven.