ENG Vs IND, 3rd Test: What Forced Rishabh Pant To Change His Stance At Leeds? 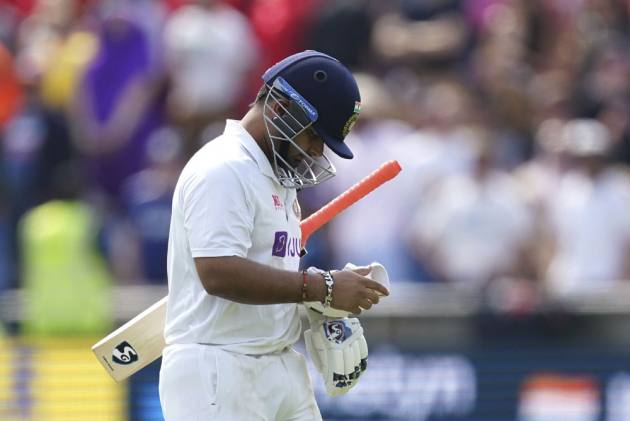 For all his flambouyance and match-winning abilities, India wicket-keeper Rishabh Pant was a poor shadow of himself at Headingly, Leeds on Day 1 of the third Test against England.

But after the day's play, Pant revealed that he had to change his stance after being told by the umpire. The left-handed batter was batting outside the crease to negate swing formed footmarks in the pitch's danger area.

"Because I was standing outside the crease and my front-foot was coming into the danger area, so he (the umpire) told me that you can't stand there," Pant said during the virtual post-day press conference on Wednesday.

The 23-year-old got out going after an Ollie Robinson widish delivery for two runs as India capitulated against England pacers. India recorded their third-lowest total against England - just 78 runs in 40.4 overs.

He added, "So, I have (had) to change my stance, but as a cricketer I don't have to think too much about that, because it's everyone who is going to do that, umpires are going to say the same thing. I didn't do that the next ball and you move on."

Of late, Pant has been pressed into action early with the top-order consistently failing to deliver but the youngster sees that as an opportunity and not something that puts him under pressure.

"As a cricketer, I don't think in that manner. Whatever be the situation, you think about the team first and what you can do in that situation," he said.

"If the top-order collapses and you get an opportunity, I see it as an opportunity that if you can bail the team out of that situation, you are going to do wonders in your life as a cricketer," he said.

"I am not thinking too much about pressure as at the end of the day, everyone is thinking good for the team. So, we need to take everything on our chin rather than thinking about pressure."

Asked whether he was comfortable batting at number six in England, Pant responded in the positive.

"Personal, individual things matter but we don't focus on that too much as the Indian cricket team," he explained.

Having won the toss and chosen to bat, India were bowled out in no time after an excellent opening spell from James Anderson sparked a collapse.

The hosts were 118 for no loss when stumps were drawn.

Pant also backed his skipper Virat Kohli's decision to bat first while admitting that the wicket was "soft" in the morning.

"It's part and parcel of the game. Every day the batting unit is giving hundred per cent, but sometimes, it doesn't go well," Pant said about the disastrous outing with the bat, which came just nine months after the 36 all out in Adelaide.

"In the morning, the wicket was slightly on the softer side and they bowled in good areas. We could have applied ourselves better. We can learn from it and only move on. That's all we can do as cricketers. You learn from your mistakes and improve."

He also said that Kohli's decision to bat first, despite the wicket being damp, was a collective call.

"I don't think so," he replied when asked if batting first was a tricky move.