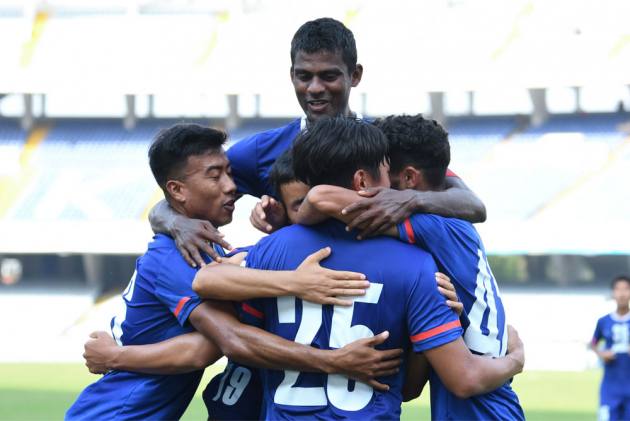 An all-Bengaluru final in Durand Cup 2021 is still possible with Bengaluru FC confirming their semi-final place with yet another come-from-behind win. The Indian Super League (ISL) outfit defeated Army Green 3-2 in their Durand Cup quarterfinal at the Vivekananda Yuba Bharati Krirangan on Saturday. (More Football News)

BFC's city rivals, Bengaluru United have already made the last four after getting walk over against Army Red Friday. In the first semi-final on Monday (September 27), Mohammedan Sporting will face Bengaluru United. The following day, two ISL sides -- FC Goa and Bengaluru FC -- face off for the second final spot.

Lallawmkima PC (9’) gave Army Green the lead in the first half, before goals from Wungngayam Muirang (20’), Leon Augustine (46’) and Namgyal Bhutia (74’) put the Blues ahead. Vibin TV (89’) pulled one back at the end, but Bengaluru held on to win the game.

Earlier, Naushad Moosa made one change to the team that beat Indian Navy 5-3, with Leon replacing Bidyashagar Singh in the attack.

The Blues started the game on the front foot and had the first chance of the game when Leon skipped past his marker and sent Sivasakthi Narayanan through on goal, but Army Green goalkeeper Sarath Narayanan was quick to come off his line and block his shot.
Minutes later, the services side took the lead at the other end, when Lallawmkima scored from the spot after he was brought down by Ajith Kumar in the box.

Leon found himself free down the right and cut into the box in the 15th minute to find Harmanpreet Singh, who took a couple of touches to make space for himself but shot straight at ’keeper Sarath.

Bengaluru got back on level terms soon after, when Leon won a free kick on the right flank. Muirang’s effort beat the wall and the ’keeper, to make it 1-1.

Buoyed by the equaliser, the Blues began to make frequent inroads into the final third, starting with Damaitphang Lyngdoh’s curling effort from the edge of the box that needed Sarath at full stretch to keep the scores level.

In the 37th minute, Parag Shrivas intercepted a pass and sparked a counter-attack by setting Leon free, who saw the ’keeper come off his line and took a shot that went wide.

Minutes later, the 22-year-old initiated another counter after winning the ball in the middle of the pitch. He sent Sivasakthi free down the right and the youngster found Biswa Darjee in the middle, but the midfielder’s touch was too heavy and Sarath was quick to come out and collect the ball.

It took less than a minute into the second half for the Blues to complete the comeback. Leon, who had sparked the comeback against Indian Navy on Tuesday, escaped his markers and, with the ’keeper charging forward, chipped the ball into an empty net to make it 2-1. Less than a minute later, he almost had another goal in a similar fashion but his effort went just wide of the goal this time.

Army Green forward Dip Majumder had two chances in the space of a minute to get his side back on level terms. First, Naorem Roshan Singh timed his sliding challenge well to make a block in the box and later Lara Sharma went low to make a save on the line.

The Blues got their third goal of the game when Biswa found substitute Bhutia in the box, and the forward shot low into the far corner to put Bengaluru 3-1 up.
Akashdeep Singh, who had an earlier effort blocked by Sarath, saw his shot deflect off the ’keeper and bounce off the far post. Army Green won another penalty a minute before stoppage time after Robin Yadav brought down Lallawmkima and Vibin TV sent Lara the wrong way to make it 3-2.