A Santos historian has said Pele's goals in friendlies should not be ignored, after Barcelona star Lionel Messi passed his record in competitive games 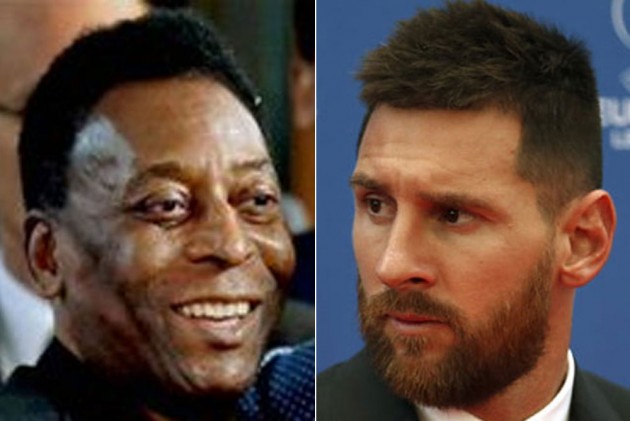 Barcelona captain Messi scored his 644th competitive goal for Barcelona in the 3-0 win over Real Valladolid on December 22.

That took him past the total of 643 that Pele scored in official games for Santos, and three-time World Cup winner Pele has been quick to praise the Argentine forward.

Yet Santos appear to believe that Pele's 448 goals in friendlies should carry equal weight, and that therefore the true leader in goals for one team remains their greatest player.

The Plays Of The Game #ValladolidBarça

The piece states: "In the last few days, much has been said in the press and on social media about the number of goals scored by Pele with the Santos shirt.

"According to some statisticians, Argentine Lionel Messi (Barcelona) became the player with the most goals for the same club, reaching 644 goals for the Catalan club, excluding friendly matches - called by some as official goals."

Ribeiro acknowledges Pele's note of congratulations to Messi, but adds: "Part of the press reports the historic feat, reneging on the greatest of all records, the total goals in the clubs.

"Pele scored 1,091 goals for Santos. In the accounts of the specialised press, the King of Football scored 643 in competitions and the 448 goals scored in friendly matches and competitions were ostracised, as if they had less value than the others.

"The 448 goals that today they try to disqualify were scored against the main clubs and teams of the day. America (Mexico) and Colo Colo (Chile) each suffered nine goals from Pele.

"Internazionale Milan, one of the main teams in Europe in the 1960s, suffered eight more goals from the King."

The historian points out a string of sides that Pele scored against in friendly games, adding: "Barcelona themselves, where Messi now plays, were also a victim of Pele: four goals, scored in four matches."

Pele's extraordinary four-figure goalscoring haul has been the subject of debate in the decades since he was an active player, with some arguing several of the opposition teams were lightweight.

The 80-year-old Pele posted a note on Twitter on Sunday that appeared to be a reference to the COVID-19 pandemic, where he wrote: "We are reaching the end of this great and tiring game. We will come out winners. And we will embrace at the end!"

Even such a warm, positive message did not mean Pele was spared a jibe from one social media critic, clearly a sceptic of his career record, who replied: "How many goals you scored against your nephew in the garden this weekend?"