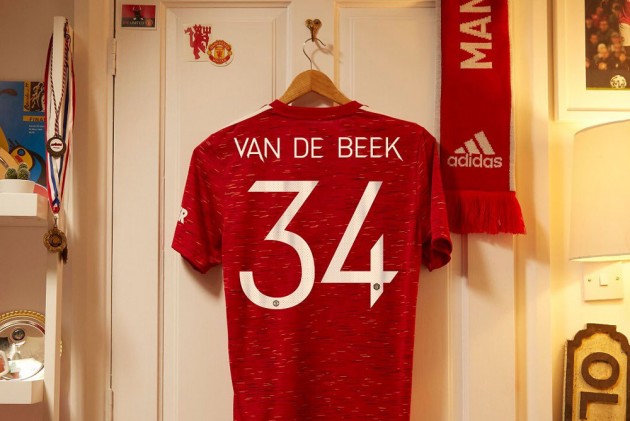 Donny van de Beek has chosen to wear the no.34 jersey at Manchester United, a tribute to his friend and former Ajax team-mate Abdelhak Nouri. (More Football News)

Van de Beek completed a transfer from the Dutch giants on Wednesday in a deal that could eventually cost United £39.1million (€44m).

Soon after his move was confirmed, the Red Devils announced Van de Beek's choice of shirt number, as the 23-year-old made a classy gesture.

Nouri, with whom Van de Beek came through the Ajax academy, had worn 34 during his time with the senior side before a tragedy cut short his burgeoning career in 2017.

Then just 20, Nouri collapsed during a pre-season match and suffered a cardiac arrhythmia attack that left him with permanent brain damage and in a coma, from which he only awoke in March after nearly two years and nine months.

Dean Henderson had been the number's custodian, but United confirmed the goalkeeper had let Van de Beek take it.

"This is a special thing for me because my good friend Abdelhak Nouri… maybe you know the story," he said to Man United's official website.

"He had a heart attack and he's a good friend of mine, and I'm really close with his family and his brother is one of my best friends. I talk a lot with them.

"So, I decided to take his old number on my shirt. I want to get good memories with this number."

Van de Beek had appeared destined to join Real Madrid earlier this year, but media reports claim Los Blancos opted to pull out of an agreement with Ajax once the coronavirus pandemic enforced a stop to top-flight European football.

The Netherlands international bolsters United's midfield options and signed a five-year contract, though the club have the option to extend it by a further 12 months.

It is expected he will make his United debut in their opening match of the Premier League season on September 19 at home to Crystal Palace.