David Luiz is a confirmed absentee, but Arsenal could also be without two fledglings and a midfield general for the clash with Liverpool. 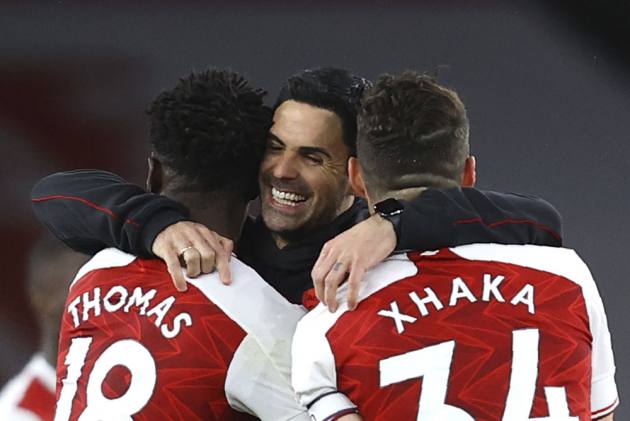 Brazilian centre-back David Luiz must miss the Premier League game at Emirates Stadium, with Arsenal stating the 33-year-old has encountered "discomfort" in his right knee.

How serious that discomfort proves to be remains to be seen, with Arsenal saying the problem would continue to be examined.

Arsenal have a 36.8 per cent win rate in the 19 Premier League games that have featured David Luiz this season, compared with 50 per cent in the 10 games for which he has been absent.

They have collected an average of 1.4 points when he has played and 1.6 when he has not, with Arsenal heading into the weekend in ninth place, four points adrift of Liverpool who sit seventh.

The injury forced Saka out of England's three World Cup qualifiers in the past fortnight and although Arsenal posted a picture on Twitter of the 19-year-old in training, they said he "will be assessed ahead of Saturday's match regarding his availability".

The same applies for Smith Rowe, who suffered tightness in his right quad on England Under-21 duty, with Arsenal prepared to leave final decisions until closer to the game.

Manager Mikel Arteta faces a further wait to learn whether former captain Granit Xhaka is ready for the game, with the Swiss midfielder having missed training on Friday due to feeling unwell on his return from international duty.

Willian is available to Arteta, however, with the former Chelsea midfielder fully recovered from a left calf injury.

The 32-year-old has had the most assists (7) of all Arsenal players this season, across all competitions, with Smith Rowe and Saka (both 6) just behind the Brazilian.