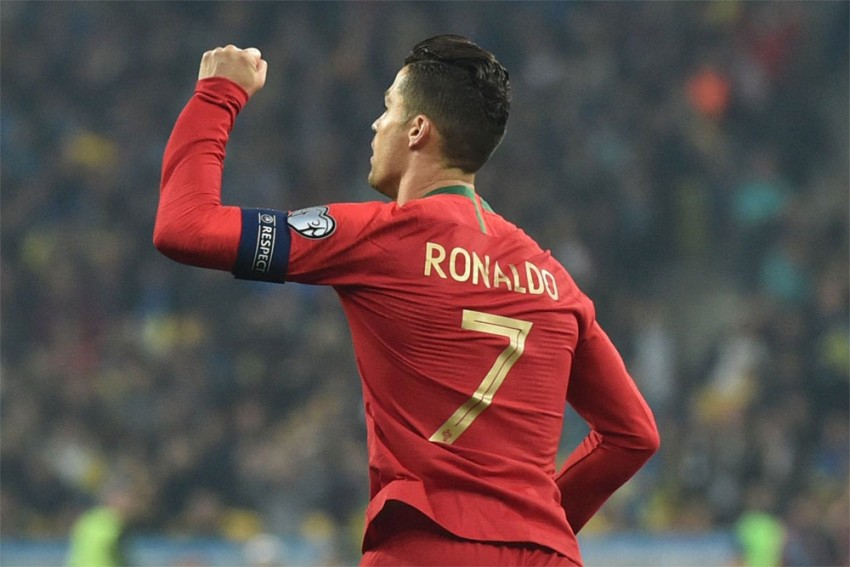 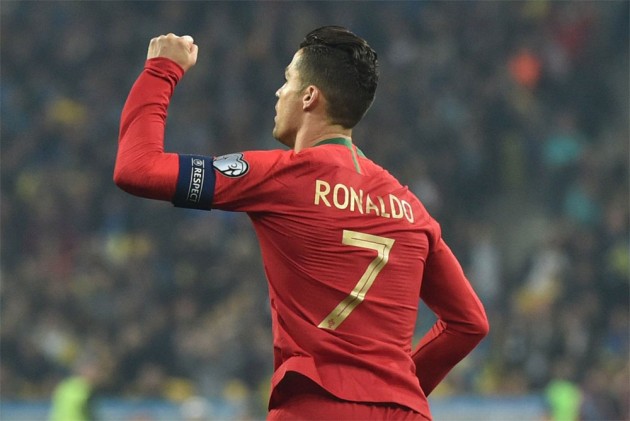 If Ukraine goalkeeper Andriy Pyatov needs any consolation, it had happened 699 times before. (More Football News)

Cristiano Ronaldo scored his 700th goal of a phenomenal career as Portugal suffered a setback in Euro 2020 qualifying on Tuesday.

Ronaldo reached his latest milestone when he converted a second-half penalty in Kiev, awarded after Taras Stepanenko handled the ball inside the box.

A hero at Manchester United, Real Madrid and now Juventus, a fair few of Ronaldo's incredible haul have been stone-cold classics. Here, we look back at 10 of his best goals.

Perhaps the finest free-kick Ronaldo struck in his career.

The Portuguese developed his reputation as a set-piece master at United and he lashed a phenomenal 25-yard effort past David James as part of a double to send Alex Ferguson's side to the top of the Premier League.

His knuckleball technique sent the ball swirling into the top-right corner for one of his defining Old Trafford moments.

He had absolutely no right to score this one.

Back in his homeland for a Champions League quarter-final against Porto, Ronaldo picked up the ball in the middle of the opposition half, got it out of his feet and sent a searing strike flying past Helton to seal a 1-0 win at the Estadio do Dragao and a 3-2 aggregate triumph.

Cristiano Ronaldo netted an unstoppable effort for #mufc against Porto on this day in 2009. Stunning! https://t.co/7xRMBjNusy

Almeria vs Real Madrid: April 15, 2010Ronaldo has developed into more of a penalty-box poacher in recent seasons, but this effort against Almeria was a reminder of how devastating he could be when starting with the ball outside the area.

Rafael van der Vaart won back possession in the Almeria half and the ball was worked to Ronaldo, who accelerated past two challenges, left a third defender for dead with a stepover, and drilled home with his left foot. The visitors would go on to win 2-1.

Sevilla have grown sick of the sight of Ronaldo – he has scored 25 times against them, after all – but this strike in a 6-2 thrashing is perhaps the best of them all.

Collecting Karim Benzema's pass 30 yards out, Ronaldo took advantage of the time and space given to him by the defence to blast a shot into the top-right corner, the swerve on the ball making it totally unstoppable. It was one of three he scored that day at the Ramon Sanchez Pizjuan.

It was not enough to keep Madrid's title chase alive but this was another goal that showcased Ronaldo's killer instinct and dexterity.

In second-half injury time, with Valencia 2-1 ahead, Angel Di Maria volleyed over a cross from the left and Ronaldo swivelled to score a backheel volley and snatch a point.

Although his game had become more refined from those buccaneering early days, Ronaldo showed here he was not quite done when it came to solo runs and spectacular finishes.

With Madrid already 3-0 up in what would prove to be a 6-0 thrashing, James Rodriguez's pass was deflected into Ronaldo's path and he did the rest, showing brilliant footwork to skip beyond three challenges before rifling home from the edge of the area with his left foot.

Portugal thrice fell behind to Hungary in Lyon during Euro 2016, and Ronaldo brought them level on the second occasion with a display of fine skill.

The captain added a deft flick with his trailing leg to Joao Mario's right-wing cross to make it 2-2, and he cancelled out Balazs Dzsudzsak's second with a double of his own. It was enough to send Portugal into the knockout stages and from there they claimed a maiden international title.Did you know? Ronaldo can also balance the trophy on his head. #EURO2016 pic.twitter.com/WK9mLZkhSL

Moving away from goal as Dani Carvajal dug a cross towards the penalty spot from the right, the Portuguese lept into the air and connected with a marvellous overhead kick. His leg was at a right angle to his body as he struck with the sweetest of volleys that flew past an idle Gianluigi Buffon.

Having twice given his side the lead, Ronaldo found Portugal 3-2 down to their Iberian neighbours in their thrilling opener at the 2018 World Cup.

The was a sense of inevitability when he stood over an 88th-minute free-kick, but the execution was sheer perfection – power and dip combined to leave David de Gea with no chance.

Another decorated Portuguese was celebrating at full-time when Jose Mourinho watched his Manchester United team complete a 2-1 comeback win.

But Ronaldo struck first with a sumptuous and technically brilliant strike, watching Leonardo Bonucci's raking ball over his shoulder to volley home.