Cricket World Cup, India Vs Pakistan: Throwback To When Sachin Tendulkar Led His Country To A Historic Victory In 2003 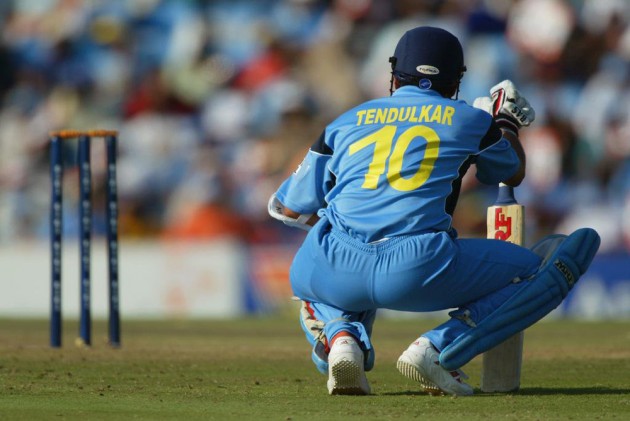 As fans gear up for India Vs Pakistan of the ongoing Cricket World Cup, many people for sure remember Sachin Tendulkar's epic knock in a similar fixture of the 2003 edition. In what can be termed as one of the best individual innings in history, the Master Blaster smashed Shoaib Akhtar, considered to be one of the fastest bowlers ever! Virat Kohli's side take on their eternal rivals on June 16, at Manchester's Old Trafford. Before D-Day begins, let's take a walk down memory lane, and experience the Little Master's fine performance against the Green Army.

It has been quite sometime since Sachin graced a cricket pitch, and the sport has never been the same without him. The calmness and aura displayed by the legend has been matched by none amongst the modern day cricketers.

With patience and concentration, the Cornered Tigers put up a good start, with Khan taking Umar's wicket in the 11th over. Veteran Anwar crossed a ton, with Pakistan well over 195 for 4 after 40 overs.

A good formidable target in those days!

The duo trod down and take their place in the pitch. After a few cautionary moves, Tendulkar hits a Wasim Akram delivery past cover for a boundary. The craze around that shot wasn't just about the boundary, it was rather about his excellent footwork, which helped him move back-foot and smash the ball.

The first over got 9 runs for India, with Akram in dismay.

After a few wides, he bowled outside off-stump, which Tendulkar punched for a six, over the third-man. Many fans believe that this was the shot which won India the match. All in all, it was pretty expensive over for Akhtar.

After a good over by Akram, Younis came in after Akhtar. Sehwag hit his first ball for a six. After changing, Tendulkar hit him for a four/ In the next over, Sehwag smashed Akram for two fours.

Soon Younis got Sehwag out, followed by a Ganguly wicket. Up came Mohammad Kaif, who turned out to be the perfect partner. A patient player, Kaif stayed with the legend, and watched him weave his magic.

Another moment which totally pushed the game in the Men in Blue's favour, was when Razzaq missed a mis-hit shot from Tendulkar, who tried to loft Akram's delivery over mid-off. He was 32 runs that time, and it wasn't supposed to be a difficult catch. But Razzaq missed it, which annoyed Wasim. Sachin then reached his 50 in Waqar's over. In celebration, he punched the air in joy!

With India at 126 for 2, Tendulkar began to suffer from cramps. Soon, he and Kaif built a 100-run partnership, with the latter having scored 31. Then finally Afridi notched Kaif's wicket, with India still at control (155 for 3 after 21.4 overs).

The management decided to send in Rahul Dravid; the best choice.

Pretty soon, Tendulkar could bear his cramps anymore, and Sehwag came in to be his runner. The score was at 177.

Then came his wicket! Akhtar pitched in a short bouncer, which whizzed towards Tendulkar in terrifying pace. The legend was a little slow to react, and hit it towards Younis at point. A fitting end to a great performance! He got out at 98 off 75 balls!

With 97 runs needed off 134 balls, Yuvraj Singh came in. An upcoming star at that time, Yuvi and Dravid took control and began to tease the bowlers.

Soon Dravid got tired, and his partner began to take over. The recently retired player totally destroyed Pakistan's bowlers.

Quickly, India reached 250. The slowly took India past the target, with Dravid hitting the winning hit via a Waqar delivery. Indian fans went screaming in victory, while Dravid took his helmet off, and Yuvraj rushed to hug him. Tendulkar received his MOTM award. The Little Genius has won three such awards against Pakistan in World Cups.

Well, it has been more than 10 years, but Tendulkar's 98 will always be one for the history books. Can we see something similar when the two teams face each other again?