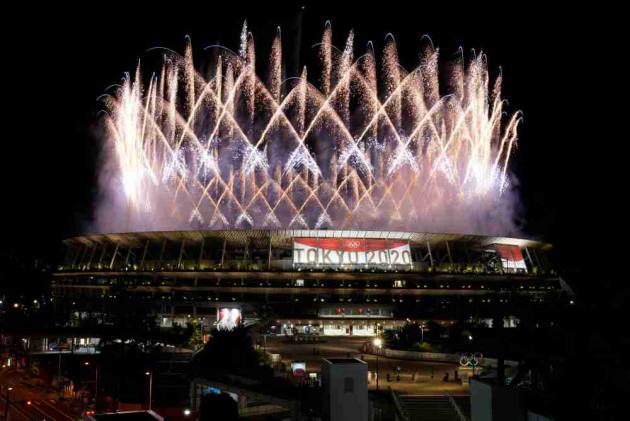 The Olympics like no other opened here on Friday sans the customary razzmatazz, the toned-down ceremony showcasing Japan's grandeur, rich culture and heritage while reflecting the sombre mood of a world ravaged by an unrelenting pandemic.

Japanese emperor Naruhito declared the Games open, a month after voicing concerns over the possible spread of coronavirus during the Olympics, becoming the third member from his family to do the honours.

It was ironical that the locals milling around the majestic National Stadium were not allowed entry due to the ban on crowds, even as visitors, including athletes and dignitaries, from across the world participated in the opening ceremony of the Games projected to cost a whopping USD 28 billion.

Fewer athletes across contingents took part, some to stay focussed on their events on Saturday, a lot others out of the fear of catching the infection that has already found its way into the Games village.

#TeamIndia is ready for the March past at the Opening Ceremony of #Tokyo2020 #Olympics #Cheer4India pic.twitter.com/asJKuvVqoy

Around 950 VIPs and world leaders were in attendance inside the arena that has a capacity of 68,000. Despite the ban on crowd, the stadium was occupied by over 10,000 individuals performing different roles.

International Olympic Committee (IOC) president Thomas Bach, without whose steely resolve and stubbornness the Tokyo Games wouldn't have seen the light of the day, acknowledged that it will be different from the ones in the past.

"Today, the Olympic athletes are sending a resounding message of hope to our fragile world. The Opening Ceremony will highlight this Olympic message of resilience, solidarity and unity of all humankind in overcoming the pandemic," Bach said in his address.

"The Olympic Games Tokyo 2020 are a light at the end of this dark tunnel."

He added, "Today is a moment of hope. Yes, it is very different from what all of us had imagined. But let us cherish this moment because finally we are all here together."

Even as the opening ceremony took place, protestors gathered outside the stadium and made their voices heard after blocking one of the city's busiest roads, forcing the police to act.

Although there were no spectators inside the Olympic Stadium, there were fireworks and music, from famous Japanese video games, to which each of the competing nations walked in, led by Greece, home of the Ancient Olympic Games, with host nation Japan entering the stadium last.

A total of 19 Indian athletes, including flag-bearers iconic boxer M C Mary Kom and men's hockey team captain Manpreet Singh, besides six officials, participated in the ceremony. The country has a 228-strong delegation in Tokyo, including over 120 athletes.

Deviating from the norm, Vanuatu and Tonga's male flagbearers created quite a flutter after they walked in shirtless and bodies smeared with oil.

'United by Emotion' was the theme of the evening which opened with a countdown video dating back to the time when Tokyo won the bid to host the Games in 2013 before persevering through a year of postponement due to the pandemic.

It was followed by a 20-second indigo and white fireworks display, highlighting the colours of the Tokyo 2020 emblem and shaped like a fan, which is an auspicious symbol in Japanese culture.

Olympic rings made from the wood of trees planted from seeds brought to the country the last time it hosted the Olympics in 1964 were formed before the traditional Parade of Nations.

Unlike previous Games held in Japan, where participating nations marched into the stadium in the English order of their names, Tokyo 2020 followed Japan's writing system.

After the Olympic oath was taken by athletes, officials and coaches, and the Games were officially declared open, a spectacular artistic display greeted the viewers as the flame entered the city's Olympic Stadium and the lighting of the cauldron took place.

Tennis star Naomi Osaka lit the cauldron on the main stage, atop an octagonal mountain inspired by Mount Fuji. The sphere opened like a flower to embody vitality and hope, a visual representation of the start of the Tokyo Games.

One of the best moments was when a staggering 1824 drones lit up the sky above the Olympic Stadium to form the Tokyo 2020 emblem in a spectacular show.

Then there was a rendition of timeless classic 'Imagine' as the Suginami Junior Chorus performed John Lennon's masterpiece, and joining them were renowned musicians from the five continents, including American singer-songwriter John Legend, Spanish singer-cum-composer Alejandro Sanz, Angelique Kidjo, and Keith Urban.

The Beatles' founder Lennon and his Japanese wife Yoko Ono, an award-winning multimedia artist, co-wrote the critically acclaimed song that became a rage in the 1970s after it was recorded in their Berkshire home in 1971.

The two big screens inside the stadium outlined the COVID-19 countermeasures which have been implemented to ensure the Games go ahead without any hiccups.

Japanese Prime Minister Yoshihide Suga message ahead of the Games was: "By hosting a safe and secure Tokyo 2020 Games, we hope to show the world that through sport, people can rediscover their connection with the planet and share their hopes and dreams with one another."

There was a lot of focus on unity in diversity, peace and solidarity during the ceremony, with the message 'you may be apart, but not alone', to the athletes who have for long trained in isolation because of the fear of contracting the COVID virus.

The Japanese flag was carried out by eight children, four eminent athletes of the country, a person with an impairment and health care professionals in recognition of their relentless service during the pandemic.

With a moment of silence, the ceremony then remembered all the people who lost their lives during the pandemic, members of the Israeli delegation killed during the 1972 Munich Games massacre, the 2011 earthquake, Tsunami and the nuclear disaster.

Members of the Japanese self defense forces raised the national flag on the Protocol Stage as the national anthem 'Kimi Ga Yo' played in the background.

Nobel Peace Prize winner, Professor Muhammad Yunus of Bangladesh, was awarded the Olympic Laurel virtually for his "extensive work in sport for development, including the Yunus Sports Hub, a global social business network.

The event was a far cry from the glitzy ceremonies of London 2012 and Rio 2016 involving thousands of performers in packed stadiums, but it stayed in tune with the unprecedented time.