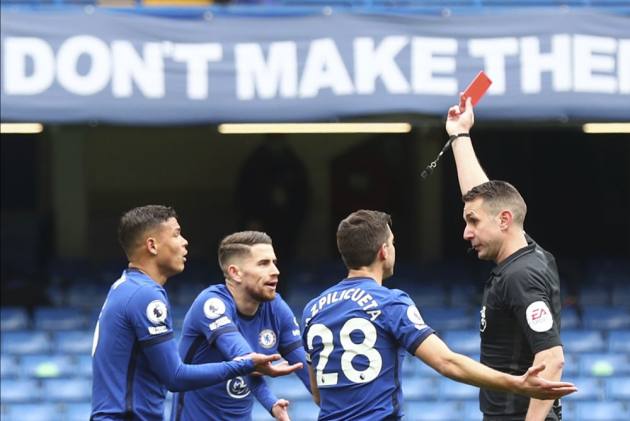 The Blues were unbeaten in 14 games under head coach Thomas Tuchel and had not conceded a goal in seven matches, but they suffered a shock defeat at the hands of the second-bottom Baggies at Stamford Bridge on Saturday.

Christian Pulisic put Chelsea in front, but Silva was given his marching orders for a second bookable offence only 29 minutes into his return from injury.

The clinical Pereira then struck twice in first-half stoppage time and things went from bad to worse for Chelsea after the break, with Robinson and Mbaye Diagne giving Albion a three-goal advantage.

Mason Mount pulled one back, but Robinson applied the finishing touches in injury time as the brilliant Baggies secured a first away league victory over the London club since 1978 to raise hopes they can pull off an unlikely great escape.

Albion started brightly, but Chelsea were in front after 27 minutes, when the alert Pulisic finished from close range after Marcos Alonso's free-kick came back off the post.

West Brom's chances of mounting a fightback were given a major boost just a couple of minutes later, with Silva picking up a second yellow card for catching Okay Yokuslu as he attempted to block the midfielder's shot from just outside the penalty area.

Branislav Ivanovic, who replaced the injured Dara O'Shea, was on the field for only 14 minutes against his former club before he did damage while sprinting to thwart Timo Werner.

The Baggies were deservedly level two minutes into time added on at the end of the first half, Pereira lobbing Edouard Mendy with his left foot after Sam Johnstone's clearance sailed over a static Chelsea defence.

Matt Phillips struck the crossbar with a measured left-foot strike but Pereira capitalised on more poor Blues defending just before the break, tucking a clinical left-foot finish inside the near post to give Albion a shock lead.

Tuchel replaced Pulisic with Mount at the interval and Semi Ajayi prevented Chelsea from equalising by diverting Alonso's scuffed shot against the post.

Pereira was denied a hat-trick by the legs of Mendy as Albion continued to cause the Blues all sorts of problems and they had a two-goal cushion courtesy of a stunning Robinson strike after 63 minutes.

Darnell Furlong was the architect, delivering an inviting cross from the right and Robinson beat Mendy with a magnificent volley as he burst into the box at speed.

Sam Allardyce's men were cutting Chelsea to pieces and Diagne finished off another devastating counter-attack before Werner set Mount up for a tap-in a few minutes later.

Robinson added insult to injury in stoppage time, dinking over Mendy with a clever finish as Albion sensationally secured only a fourth win of the season in the top flight.