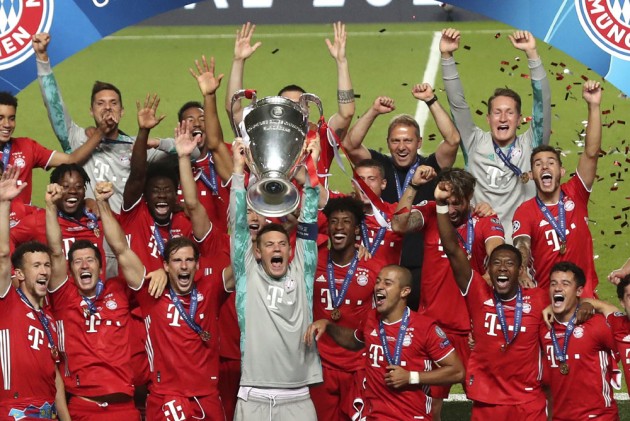 Hansi Flick's men were second best for periods of the match at the Estadio da Luz in Lisbon, but Coman made the difference to deny his former club a historic first Champions League title.

His well-placed header ensured Bayern emulated their treble-winning side coached by Jupp Heynckes in the 2012-13 campaign.

Given the exploits of both sides en route to the final, the first half was somewhat lacking the deadly touch many might have expected in the final third, with Neymar, Kylian Mbappe and Robert Lewandowski all spurning decent chances.

Coman, a PSG academy product, broke the deadlock in the 59th minute and that caused the contest to open up significantly.

But, while the Parisians might feel they were incorrectly denied a penalty in an incident involving Mbappe and Joshua Kimmich, Bayern held on to seal their sixth European crown.

Perhaps jolted into life by that scare, Bayern went even closer soon after as Lewandowski swivelled in the area and hit the left-hand post, but still PSG looked brighter.

Jerome Boateng's forced withdrawal through injury made life tougher for Bayern, though Lewandowski again went close just past the half-hour mark when his close-range header forced Keylor Navas into action.

Neuer then had to be alert at the other end on the stroke of half-time, saving Mbappe's tame attempt after a defensive mix-up.

Although the second half began as a tighter contest, Bayern produced their best move of the match just before the hour and it brought the crucial goal.

Lewandowski laid Serge Gnabry's cross back to Kimmich just outside the area and his inviting delivery to the back post was headed home by Coman.

PSG had to mount a response and almost levelled when Neuer saved from Marquinhos, while Kimmich's apparent trip on Mbappe in the Bayern area went unpunished a few moments later.

Neymar then curled just wide – with substitute Eric Maxim Choupo-Moting almost getting a crucial touch on it – in stoppage time, but Bayern hung on as PSG fell short.

What does it mean? All-conquering Bayern prolong PSG's quest for Holy Grail

Ever since PSG's change of ownership in 2011 took their ambitions to the next level, the Champions League has been their ultimate goal. They are a team that was put together with the sole purpose of becoming European champions. (More Sports News)

But, while they have at least reached the final hurdle this time, once again they have ultimately failed, though they had their moments here and will feel hard done by.

As for Bayern, the German champions may not have produced the devastating performance neutrals were hoping for, but they out-scrapped PSG in the end, capping a remarkable achievement for Flick.

Return of the King

A former PSG youth player, Coman left the club as a teenager convinced he would find a better route to first-team football elsewhere. He has gone on to enjoy remarkable success and he was impressive here, his winning goal just the tip of the iceberg.

After Flick handed him a start over Ivan Perisic, he terrorised Thilo Kehrer and had the last laugh against his old club.

Di Maria fades into the background

A couple of brief flashes aside, it was a disappointing outing for Di Maria on the biggest stage. He failed to create a single chance and his solitary shot was a woeful attempt.

30 & 21 - FC Bayern München finished the 2019-20 season unbeaten in their last 30 games (W29 D1), winning each of their final 21 matches in all competitions. Unstoppable. #PSGFCB #UCLfinal pic.twitter.com/OtoU5xgOr5

There is no time to sulk for PSG, as they commence their Ligue 1 title defence away to Lens next Saturday, while Bayern have a bit of a break before they return to domestic action. Their DFB-Pokal campaign starts on September 11, before the Bundesliga champions' league adventure begins at home to Schalke seven days later