Bayern Munich issued a Bundesliga statement with a 4-1 victory in RB Leipzig, when Borussia Dortmund came from behind three times to beat Bayer Leverkusen 4-3 in a thriller. (More Football News)

Robert Lewandowski, Jamal Musiala, Leroy Sané and Eric Maxim Choupo-Moting scored for defending champion Bayern to beat its closest challenger last season, though coach Julian Nagelsmann had to endure a hostile reception in his first game back since leaving Leipzig for Bayern.

Nagelsmann started former Leipzig defender Dayot Upamecano and brought on former Leipzig captain Marcel Sabitzer for his Bayern debut in the 59th, just after Konrad Laimer pulled one back from 25 meters (yards) for the home side.

Away wins were the order of the #BLMatchday!

Leipzig's third defeat from four games means coach Jessie Marsch's team was already seven points behind Bayern as it prepares to face Manchester City away in the Champions League on Wednesday. “The daily work with the group is very strong at the moment, very good,” said Marsch, who said he was happy with his team's performance.

“We need results to validate what we're doing and to make sure we have a good feeling for what we're doing.” Leipzig missed chances by the likes of André Silva and Yussuf Poulsen. New Leipzig captain Péter Gulácsi pulled off a fine save to deny former teammate Sabitzer, and Choupo-Moting completed the scoring in injury time.

Nagelsmann had already taken off Lewandowski with an eye on Bayern’s Champions League opener in Barcelona on Tuesday. Lewandowski’s early penalty took his tally to six goals in four league games. The Poland star has scored in his last 17 matches across all competitions for Bayern.

Dortmund and Leverkusen had — along with Bayern — the best attacks in the league (nine goals from three games), so needed no encouragement to push forward against each other. But the winning goal, a penalty scored by Erling Haaland in the 77th minute, came after a contentious decision.

Odilon Kossounou caught Dortmund captain Marco Reus in the face with his hand as he tried to shield the ball, and referee Daniel Siebert pointed to the spot after watching replays following an intervention from the video referee.

“It's not a real blow in my opinion,” Reus said. “What can I do? He hits me and I noticed it hurt and that's why I went to the ground.” Leverkusen opened the scoring in the ninth minute when Paulinho played through Florian Wirtz and the 18-year-old Germany forward tucked his shot inside the right post. 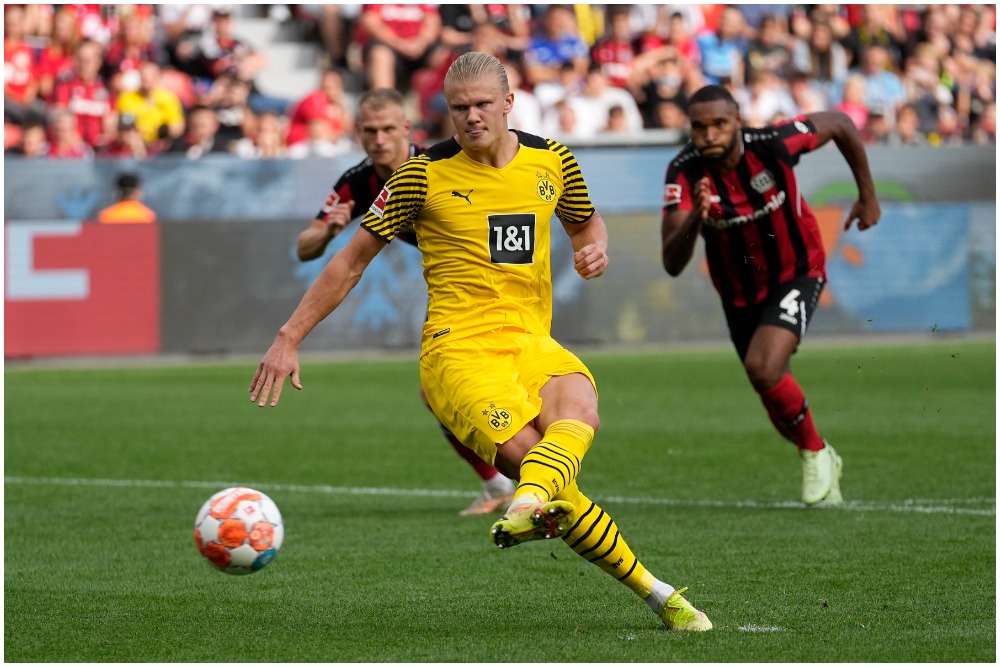 Dortmund kept pushing, however. Haaland finally equalized in the 37th with a header to Thomas Meunier’s cross. Jude Bellingham’s goal two minutes later for Dortmund was ruled out by VAR for a foul by Mahmoud Dahoud in the buildup.

Bellingham went close shortly afterward and Leverkusen struck on a counterattack before the break. Wirtz set up Patrik Schick to score in off the far post before the break. Brandt equalized right after it, somehow controlling Haaland’s poor pass at pace before blasting the ball high into the roof of the net.

But Moussa Diaby fired Leverkusen back in front in the 55th with a crisp shot from distance inside the right post. He missed the ball with his first attempt and made up for it with his next.

Raphaël Guerreiro equalized with a brilliant free-kick inside the top right corner the 71st, and Haaland had the final say from the penalty spot. “Altogether I think 3-3 would have been fair,” Leverkusen midfielder Robert Andrich said.

Wolfsburg maintained its perfect start to the season by winning at promoted Greuther Fürth 2-0, Mainz won at Hoffenheim 2-0, Cologne drew in Freiburg 1-1, and Union Berlin drew with Augsburg 0-0.