Werder Bremen took the lead but were hit for six by Bayern Munich, with Philippe Coutinho scoring three and setting up another two 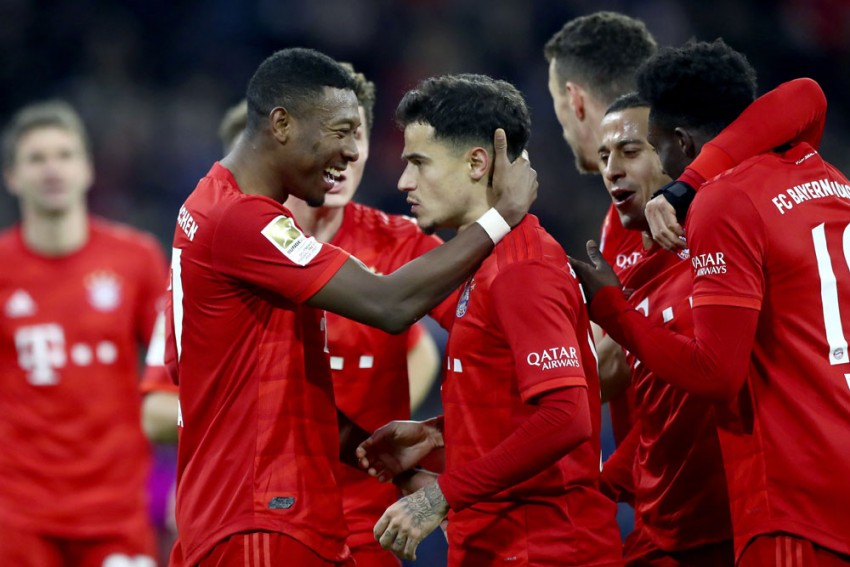 Philippe Coutinho turned in a dazzling display as Bayern Munich came from behind to beat Werder Bremen 6-1 in the Bundesliga. (More Football News)

On-loan Barcelona playmaker Coutinho scored a hat-trick and laid on another for Robert Lewandowski, who continued his prolific campaign with a brace.

Bayern headed into the match on the back of consecutive league losses to Bayern Leverkusen and Borussia Monchengladbach and Bremen deservedly led at the Allianz Arena through a fabulous Milot Rashica strike.

But those struggles felt a lifetime ago by the time Coutinho set up substitute Thomas Muller for the fifth, while the former completed the rout with a brilliant finish from the edge of the area.

Rashica spurned his first opening of the contest, streaking clear of the Bayern defence only to lose his footing in the penalty area, but he atoned in the 24th minute - spinning into space on halfway and driving at Jerome Boateng to lash in a stunning long-range strike.

Bremen goalkeeper Jiri Pavlenka sharply denied Lewandowski and Coutinho, but the two attackers would decisively turn the game on the stroke of half-time.

Coutinho tapped in at the far post from Serge Gnabry's low cross after Josh Kimmich's chipped pass opened Bremen up.

Theodor Gebre Selassie was substituted after injuring his knee in the process of trying to stop the equaliser and the right-hand side of the visitors' defence was exposed as Coutinho played in Lewandowski to equalise in stoppage time.

Bremen retained their threat on the break, with the livewire Rashica slicing wide after tearing at the Bayern defence, yet Coutinho put daylight between the teams after the hour, lobbing a bouncing ball from David Alaba over the helpless Pavlenka.

Muller came on for Leon Goretzka with 20 minutes to play and his old alliance with Lewandowski yielded number four, the Poland star darting on to a chipped return pass for his 18th Bundesliga goal of the season.

Muller then got in on the act himself with a close-range finish – Coutinho the provider before claiming the matchball with a trademark curling effort that arced beyond the diving Pavlenka to find the net via the upright.

What does it mean? Bayern show their muscle to stay in touch

Hansi Flick's men are back into the Bundesliga's top four - at least until fifth-placed Schalke play on Sunday - and, despite their inconsistency, their array of attacking talent means it will still take a formidable effort from any of Gladbach, RB Leipzig or Borussia Dortmund to deny them the title.

The dream move to Barcelona that Coutinho persistently lobbied for turned sour, but this was far more like it from the joint-fourth most expensive player of all time. Creativity, vision and a pair of contrastingly wonderful second-half finishes meant he deserved his treble.

It seems peculiar to single out a defender on the right side of a 6-1 scoreline, but most things Bayern's former Germany international did sat somewhere between laboured and awful. The relentless Rashica could and should have made him pay a heavier price.

Bayern travel to Freiburg on Wednesday, a day after Bremen entertain Mainz.