Brazil Vs Peru, Copa America 2021, Live Streaming: When And Where To Watch 1st Semi-final 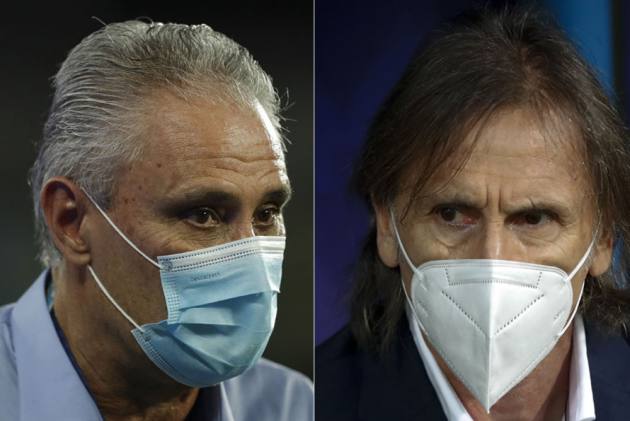 Defending champions Brazil remain favourites to win the 2021 edition of CONMEBOL Copa America, which they agreed to host at the 11th hour following complications [read: refusals] in Colombia and Argentina. Interestingly, Argentina and Colombia are two of the four teams still in contention for the title.

But hosts Brazil have extra motivation to win it -- considering the many protests, COVID-19 crisis, pitch controversies, etc. And a win against Peru in their semi-final will help Tite's Selecao move closer to their 10th continental title, which is still far behind Uruguay's 15.

Brazil won their group, with three wins and one draw. One of the wins was against Peru, a 4-0 thrashing at Nilton Santos Stadium, where they will meet again for a place in the final. Brazil, however, will be cautious not to be too adventurous, especially considering their struggle against Chile in the quarters.

Moments after Lucas Paqueta's strike in the 46th minute against Chile, Brazil lost Gabriel Jesus to a straight red card, and they were forced to defend the one-goal lead for the rest of the match.

Peru finished second in Group B behind Brazil, with two wins, one draw and one defeat. The two-time champions then survived a bad-blood quarter-final clash against Group A third-place finishers Paraguay. They won it on penalties 4-3 after the normal time ended on 3-3. There's no extra time. The semis and third-place play-off too will have no extra time, but the big final will have 30 minutes after the normal time to decide the winner if the scores are tied. Then, the shoot out.

Peru sure are the underdogs. But Ricardo Gareca's men will take inspiration from their famous win against Brazil in the Copa America Centenario in 2016 in Foxborough. Raul Ruidiaz scored a controversial goal in the 75th minute and it was enough to knock Brazil out. Brazil had failed to make the knock-outs, finishing third behind Peru and Ecuador. Yes, Neymar was conspicuously not in the squad which was managed by Dunga.

Head-to-head: This will be their 50th meeting. Brazil lead the head-to-head record, 35-5. Nine matches ended in draws. In the group stage, Brazil hammered Peru 4-0, with Alex Sandro, Neymar, Everton Ribeiro and Richarlison on the scoresheet.

Peru's last win against Brazil was a 1-0 victory in an international friendly in September 2019 at Los Angeles. Luis Abram scored the all-important goal in that match. Before that, that famous Copa America Centenario win in Foxborough.