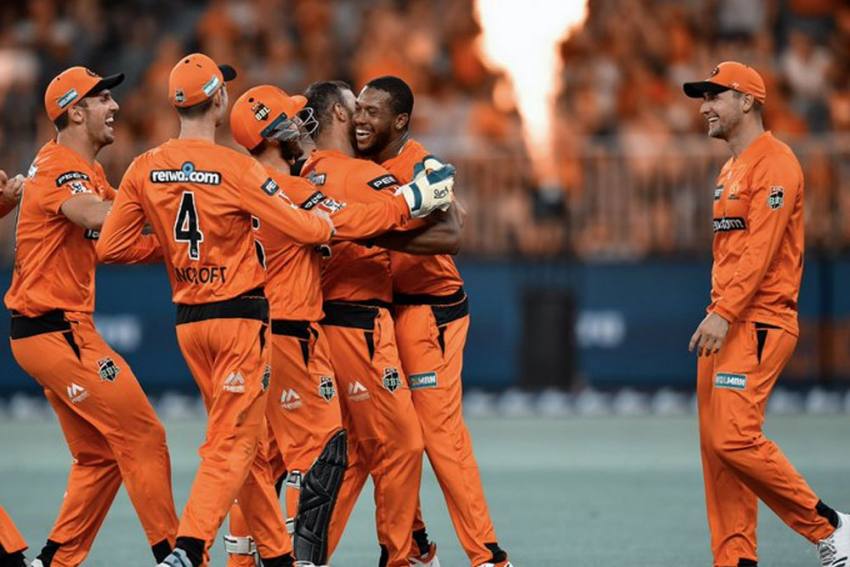 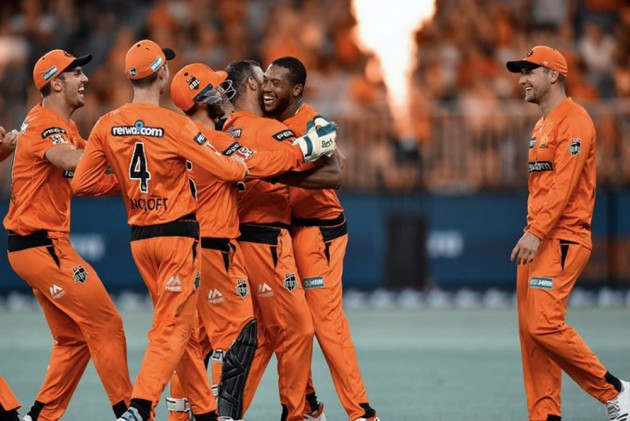 Perth Scorchers recorded their first win in the 2019-20 Big Bash League on Saturday, coming out on top in a high-scoring game with Melbourne Renegades on Saturday. (More Cricket News)

Mitchell Marsh hammered 56 from 22 balls as he prevailed in the family battle against brother Shaun, who made 55 against his former team in a Renegades run chase that came up short in the final reckoning.

Cameron Bancroft also hit a half-century for Perth to help them post 196-7, though Melbourne were in a promising position when they started the 17th over on 156-3.

However, they lost three wickets in a hurry - including the dismissal of Dan Christian to a stunning catch in the deep by Chris Jordan - as the Scorchers eventually triumphed by 11 runs.

Ben Webster finished up unbeaten on 67 from 37 deliveries yet it was the hosts who were celebrating in the end at Perth Stadium, as they left the reigning champions without a victory two games in to their title defence.

Chris Jordan, ARE YOU KIDDING ME!!! #BBL09 pic.twitter.com/kZZf2yMWxF

Perth made a mess of batting first in their opener against Sydney Sixers, when they were bowled out for 131, but prospered this time around after losing the toss.

Liam Livingstone made 29 before falling to Lancashire team-mate Richard Gleeson, while Bancroft's 50 - along with 36 from Ashton Turner - set up Mitchell Marsh for an impressive late onslaught.

The all-rounder launched six sixes as the Melbourne attack toiled bar Kane Richardson, who made sure Perth's final total remained under 200 by returning impressive figures of 4-22.

His economical four-over spell included 11 dot balls, while he also held on to a sharp return catch to dismiss Ashton Agar.

The crowd relished the opportunity to watch the Marsh brothers go up against each other in Melbourne's innings, with Mitchell getting the chance to bowl at his older sibling.

Having decided as captain to bring himself on for the seventh over, Mitchell even had to abort his first attempt at a run-up to increase the tension, leading to a wry smile from the bowler.

However, the head-to-head battle fell a little flat, Shaun managing two singles from the pair of deliveries he faced during Mitchell's two-over spell.

'AIR JORDAN' DOES IT AGAIN

Shaun Marsh and Webster's 92-run stand had the Renegades right in the contest, only for the game to turn crucially in the Scorchers' favour in the 18th over.

The excellent Fawad Ahmed (2-22) finished his work with the ball by taking two crucial wickets, starting with the leg-spinner tempting Marsh to hit straight to Jordan in the deep.

However, while that chance was straightforward, Jordan produced a sensational grab later in the same over to send back Christian. Having made ground to his right from his position at long on, the England international produced a full-length dive - with both feet off the ground - to cling on to the opportunity.