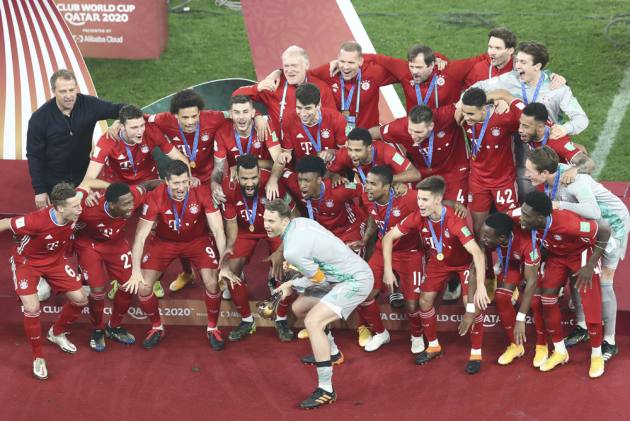 Without the influential Thomas Muller and Jerome Boateng, Bayern laboured for much of Thursday's final in Qatar, with their usual efficiency in front of goal also absent.

A harsh offside decision from the VAR denied Joshua Kimmich a first-half opener, but the technology came to Bayern's aid in the 59th minute when it guided referee Esteban Ostojich to overturn the decision to disallow Pavard's goal for a Robert Lewandowski offside.

The first North American team to reach the Club World Cup final, Tigres had a hopeful penalty appeal dismissed shortly after Pavard's effort, but they failed to test Manuel Neuer as Bayern completed a clean sweep of six trophies over the course of the last 12 months.

Kingsley Coman's winner in last season's Champions League final ultimately booked Bayern's spot at this tournament, but the winger flapped at an early chance following a bright start from Tigres.

Kimmich thought he had put Bayern ahead with a thumping effort in the 18th minute, only for the goal to be disallowed for Lewandowski having been offside, despite hardly interfering with play.

Tigres were caught cold by a short corner after the half hour, with Leroy Sane's strike crashing against the angle of the post and crossbar.

Yet the pressure finally told just before the hour. Lewandowski beat the Tigres offside trap and went in for a header which Nahuel Guzman parried straight to Pavard.

His finish was initially disallowed, but VAR said the decision should be overturned.

Pavard almost turned from hero to villain minutes later when he blocked Luis Quinones' cross and it rebounded back onto his arm, but the officials fairly judged it was ball-to-hand.

Tigres pushed for an equaliser but only managed to come close to conceding again – Corentin Tolisso having an effort tipped onto the post before Guzman made a fine save to deny Douglas Costa and Kimmich, as Bayern wrapped up the trophy they previously lifted in 2013.

What does it mean? Flick's super six

It has been some ride for Hansi Flick since he took charge of Bayern following Niko Kovac's departure in November 2019. Under his tutelage, the Bavarians have gone on to win every trophy on offer to them, and that matches Barcelona’s feat in 2009. This Club World Cup was meant to be played in December 2020, the year of Bayern's dominance in Germany and Europe, but pandemic factors saw it delayed.

Bayern's triumph kept up Europe's dominance of the Club World Cup, with Chelsea – in 2012 – the last UEFA representative not to win the trophy.

The only mark against Kimmich's imperious display in the middle of the park was that his supreme strike was ruled out.

On a difficult pitch, the Germany international completed 78 of his 89 attempted passes, attempted a team-high five crosses and created four chances – at least two more than any other player.

Since swapping Ligue 1 for Liga MX in 2015, Gignac – now a veteran campaigner at 35 – has gone on to become Tigres' record goalscorer and has established himself as a true club legend.

He was the top scorer in this year's Club World Cup with three goals, but the Frenchman could not haul his team to a third win, and he was reduced to just one attempt, which came in the first minute.

- Bayern boss Flick has now won six trophies during a 68-game tenure at Bayern. His team have not lost any of their last 20 games in international competition, winning 19 of these, an ongoing club record.

- Bayern have won all four of their games in FIFA Club World Cups, winning the trophy for the second time. Only Real Madrid (4) and Barcelona (3) have lifted the trophy more times.

- Lewandowski’s eighth assist of the season came in his 28th competitive game, adding to the 29 goals he has scored for Bayern in this 2020-21 campaign.

Bayern have a quick turnaround, with Arminia Bielefeld visiting the Allianz Arena on Monday. Tigres, meanwhile, have a week until their Liga MX clash with Cruz Azul.