BAN Vs WI: Nkrumah Bonner Leads West Indies To 223-5 Against Bangladesh On Day 1 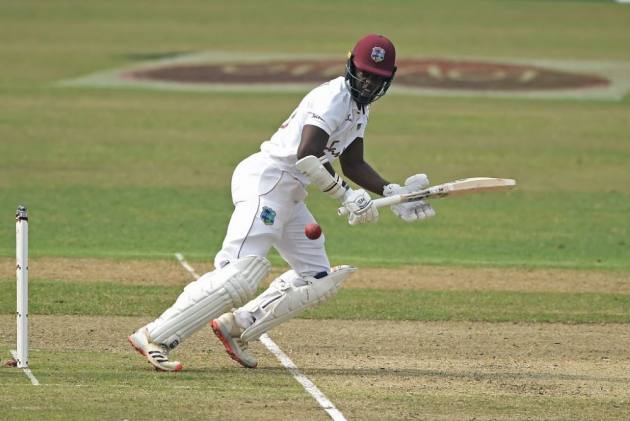 Nkrumah Bonner was making up for lost time with his second successive half-century as West Indies ground out 223-5 against Bangladesh on day one of the second cricket Test on Thursday.

Captain Kraigg Brathwaite contributed 47 and fellow opener John Campbell 36 but the West Indies was bunkered down in the face of relentlessly disciplined bowling. The home team had the initiative until the unbeaten 45-run, no-risk stand by Bonner and Da Silva to see out the day.

How long Bonner lasts will be the key to West Indies' innings, with a 300 total looking imposing. After almost a decade out of the national setup, his 86 on debut last weekend helped West Indies win the first test in a remarkable comeback in Chattogram.

"Every innings I play, I put pressure on myself. We get paid to make runs and to be consistent," Bonner said.

"This wicket has a little more bounce, but it is similar (to Chattogram). So basically it is the same gameplan. I tried to play as many balls as possible on the front foot, and keep the ball in the V for as long as possible."

After opting to bat first, Brathwaite and Campbell shared a decent 66-run start.

Campbell cut offspinner Mehidy Hasan past point for a boundary to begin his scoring on his 12th ball faced. Campbell also struck offspinner Nayeem Hasan for a six over long on. But with West Indies appearing untoubled, Campbell gave up his wicket when he was trapped plumb trying to sweep left-arm spinner Taijul Islam.

Campbell reviewed in vain. His 68-ball innings included five fours and one six.

The bowlers regrouped well after lunch to take three wickets.

Fast bowler Abu Jayed was rewarded for hitting the right length consistently with Shayne Moseley's wicket for 7, after which Brathwaite perished to a cut shot off Soumya Sarkar's medium pace, three runs short of his 21st test half-century.

Kayle Mayers, the first batsman to score a double century in the fourth innings on debut in the first Test, was out for 5 driving at Jayed and giving an outside edge to the slips.

West Indies was in trouble at 116-4 but Bonner engineered a recovery, first with Jermaine Blackwood. Their 62-run for the fifth wicket lasted until Blackwood was caught and bowled by Taijul for 28.

"The wicket was not what we expected," Jayed said.

"We are expecting some turn for the spinners. But I think it needs time.

"At the moment, it's important to contain their scoring rate."

Bonner brought up his half-century driving a Taijul delivery to long off for a single off 98 balls. But because of the good bowling, he opted for a defensive approach, which paid off for him. His 173-ball knock so far includes six boundaries.

Jayed and Taijul have two wickets each.