Angel Correa and Yannick Carrasco were on target as Atletico Madrid returned to the top of LaLiga with a 2-0 win over relegation-threatened Huesca. 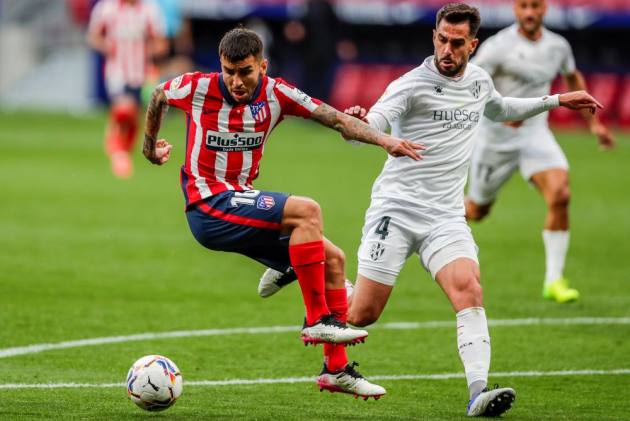 Angel Correa and Yannick Carrasco were on target as Atletico Madrid returned to the top of LaLiga with a 2-0 win over relegation-threatened Huesca. (More Football News)

Correa struck twice in a 5-0 thrashing of Eibar on Sunday and he opened the scoring at the Wanda Metropolitano on Thursday with a deflected strike.

Carrasco eased the nerves with a second goal - his third in as many matches - 10 minutes from time to put Atleti three points clear of Real Madrid with six games to go.

Diego Simeone's Atletico side ought to have won by a more emphatic margin a day after they confirmed their withdrawal from the collapsed European Super League.

3 - Yannick Carrasco has scored in three consecutive games for @atletienglish for the first time ever (3 goals) after 169 games played in all competitions. Vital. pic.twitter.com/BNe0mwwkS0

Yet Dimitrios Siovas should have given Huesca a shock third-minute lead when he shot straight at Jan Oblak from close range after Atleti failed to deal with a free-kick from the left.

Alvaro Fernandez produced a sharp double save at the other end to deny Carrasco and Saul Niguez, and then Correa opened the scoring six minutes before the break.

The in-form forward turned sharply after taking a pass from Marcos Llorente and beat Pablo Insua before finding the back of the net with a deflected left-footed strike.

Atleti picked up where they left off following the interval, with Fernandez making himself big to keep out Koke's effort from close range.

The busy Huesca goalkeeper was called into action again to palm Renan Lodi's drive away for a corner as Simeone's men continued to dominate.

Sergio Gomez came agonisingly close to equalising when his free-kick flashed wide of the post before Fernandez beat away another effort from Niguez.

Carrasco gave Atleti breathing space, tapping in after Llorente unselfishly squared the ball as Huesca appealed for offside. The goal was awarded following a VAR check.

Dani Escriche should have pulled a goal back in the closing stages when he stabbed wide from point-blank range, as Huesca's survival hopes suffered a blow.

What does it mean? Atleti back on top with bigger tests to come

The Atletico players showed no signs of being distracted by the off-field European Super League fiasco, focusing on the job in hand with a title in their sights.

They were a cut above lowly Huesca, who are facing a big battle to retain their top-flight status, and ensured city rivals Real's stay at the top was short.

Atleti will know they have bigger tests to come in what promises to be a tense title race, with a trip to Barcelona to come next month.

Correa, Carrasco and Llorente on song

The in-form trio of Correa, Carrasco and Llorente have been in brilliant form and the trio played key roles once again.

Correa is just one goal shy of his best tally of eight in a LaLiga season and has scored or assisted in three consecutive games.

Carrasco has scored in three games in a row for the first time, while Llorente set up both goals on the back of claiming a double in the drubbing of Eibar.

Siovas endured a nightmare at both ends of the pitch. The defender ought to have score an early opening goal when the ball fell kindly for him and then he gifted Llorente possession at the same end with time running out, resulting in a second goal for the leaders.

- Leaders Atletico have a points advantage ahead of their chasers after 32 games, and on the four previous occasions they have been able to say that, they have gone on to win LaLiga (1972-73, 1976-77, 1995-96 and 2013-14).
- Correa has scored in 31 LaLiga games for Atletico and has yet to be on the losing side when he has found the net (W27 D4). Carrasco has a similar success rate, having not tasted league defeat with the team in the 19 games where he has scored (W18 D1).
- Correa has been involved in 15 goals in LaLiga this term (seven goals and eight assists), his best tally in a single season since he arrived in the 2014-15 campaign. He is the second Argentinian to be involved in 15 goals in a single league season for Atletico this century, after Sergio Aguero.
- Llorente has provided 10 assists in LaLiga this season, more than any other midfielder in the competition. He is the first Atletico midfielder to provide 10 assists in a single campaign for the team since Koke (14 in 2015-16, the most by an Atletico midfielder in LaLiga this century).
- Atletico are unbeaten in their last 28 home LaLiga games against newly promoted sides under Simeone (W26 D2). Their last defeat at home in the competition against such sides was in December 2011 vs Real Betis (2-0) under Gregorio Manzano.

Atleti go in search of a third successive win at Athletic Bilbao on Sunday, while Huesca are at home to Getafe on the same day.